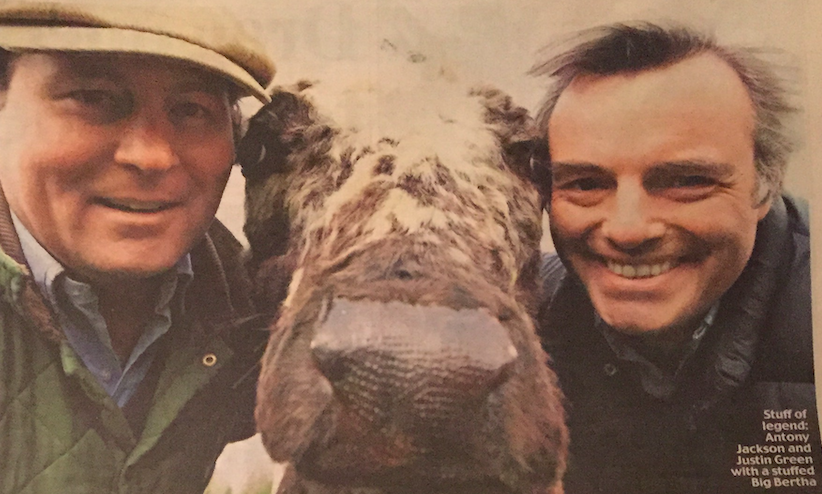 Antony and Justin with Bertha. 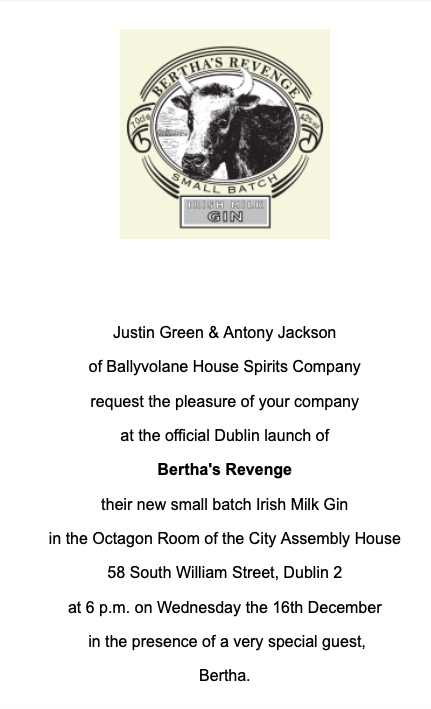 Invitation to the launch of Bertha’s Revenge in 2015, at which Turtle was guest speaker.

It had been close to 22 years since I attended her wake in County Kerry so you can appreciate the butterflies that flittered through me as I ascended the stairs of Dublin’s Assembly Rooms to be reunited with her.

She looked pretty good, all things considered. She’d certainly managed to keep that slim, medium frame of hers. She’d even been spruced up in Killarney ahead of her big night.

This wasn’t the first time Big Bertha was belle of the ball, of course, but it was she’d never had a gin named for her before.

Big Bertha is listed in the Guinness World Records on two accounts. Firstly she clocks in as the oldest cow in the world, racking up just shy of 49 years, which is comfortably twice that of the average cow.  On account of her living so long, she’s also the most prolific cow in the world, begetting an astonishing 39 calves during her lifetime.

In the weeks that followed her demise on New Year’s Eve 1993, her owner had her stuffed and she went on exhibit at his farm in Kerry. On 16 December 2015 she took centre stage once again when she presided over the launch of ‘Bertha’s Revenge’, a new milk gin from the Ballyvolane House Spirits Company. The gin’s distinctive flavour comes from being made with whey alcohol and named in her honour. Bertha’s Revenge was named 2015 Drink of the Year by John and Sally McKenna’s Guides and won a Bronze Medal at the International Wine & Spirit Competition (IWSC) 2016. It’s been garnering awards ever since, including two gold medals at the 2022 San Francisco Spirits Awards.

Big Bertha was born on St. Patrick’s Day 1944 at Bohocogram, near Sneem, Co. Kerry. Two years later her breeder Mike O’Leary sold her to Jerome O’Leary, no relation, at the Sneem fair. The sale was celebrated with pints of porter in Danny O’Shea’s bar on Sneem’s North Square.

Jerome then brought his new beauty home to his remote farm in the Direendraugh boglands, midway between Sneem and Moll’s Gap. This was to be Bertha’s base for much of the next half century as the frolicking young heifer evolved into the grand dame of the bovine world.

She was of an ancient and rare breed called the Droimeann. Although indigenous to Kerry, the breed was once found scattered across Ireland. It was mentioned in both the Annals and in Brehon Law.

The Droimeann became something of a household name during the early 18th century when a powerful lament called ‘An Droimeann Donn Dílis’ was adopted by the Jacobites as a call to arms. In the song, the Droimeann cow represents Catholic Ireland oppressed by Hanoverian England.  The song later crossed the Atlantic to the USA where it was reborn as ‘Drimmer’s Cow’ or ‘Poor Drimmer’. In 1937 the great blues singer Lead Belly heard it sung in Greenwich Village by an Irish singer called Sam Kennedy. He reworked it into the song ‘If It Wasn’t For Dickie’, simultaneously inventing the rhythm later used in the song ‘Kisses Sweeter than Wine’. (Bongwater, anyone?)

The breed was on the cusp of extinction by the time Bertha began producing her first calves in the late 1940s. With fewer than 200 Droimeann cattle left it fell to farmers like Jerome O’Leary to preserve the line. And rightly so because as well as being easy-going and intelligent animals, the Droimeann are famed as good milkers and easy calvers. They also clearly have a remarkable longevity gene. 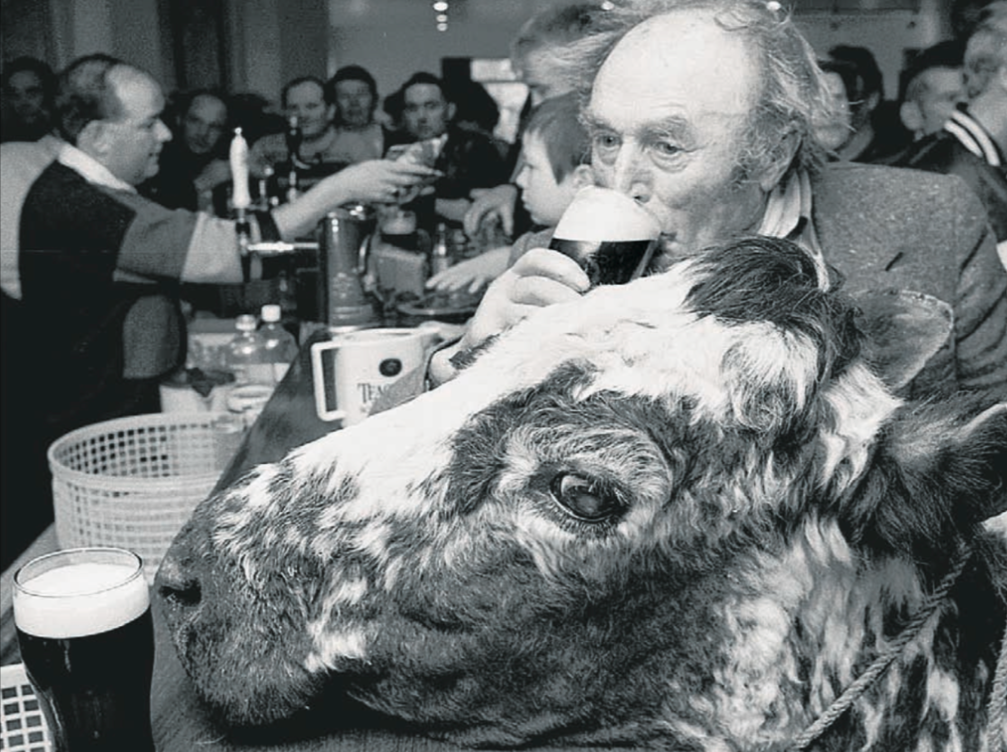 Big Bertha enjoying a pint at the Blackwater Tavern with her owner Jerome O’Leary.

Bertha first edged her way into the Guinness Book of Records soon after her 40th birthday in 1984. Jerome O’Leary then offered her services to Pat O’Connell and Donie Riney, two Kerrymen who were in charge of a very effective campaign to raise funds for cancer research in the late 1980s. Her appearance at fairs, marts and St Patrick’s Day parades generated tens of thousands of pounds for the fund and made Bertha a national celebrity.

Her 48th birthday in 1992 occasioned a St Patrick’s Day special on Gay Byrne’s radio show which became a celebration of all things bovine. As the show aired live from the Blackwater Tavern, listeners heard local taxidermist Dave Donoghue tell Joe Duffy how he would go about stuffing Bertha ‘if ever the need arose.’ Bertha stood in the pub, alongside the rest of the guests, while owner Teddy O’Neill was on hand with bucket and hose to clean up as and when she made a ‘deposit’ on the barfloor.

Bertha’s star shone ever brighter in her final year. She met the King and Queen of Sweden. Hello magazine gave her ‘a pat on the back’ for turning 48. There was even talk of bringing her on a fund-raising expedition to New York where Dinie Riney’s brother John Riney operated the Sally O’Brien bar chain.

However, she finally passed away on New Year’s Eve 1993. 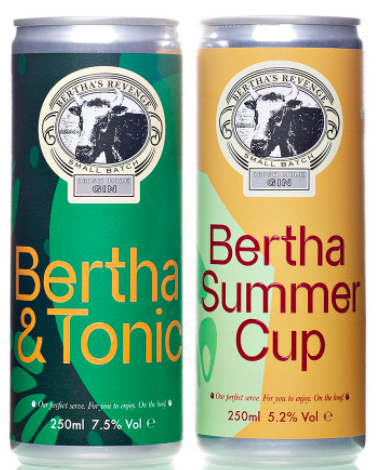 I chanced to be on a road trip through the kingdom of Kerry on the very day of Big Bertha’s demise. Our aim to reach Caherdaniel for last orders had come asunder when our car broke down earlier in the day. By the time the car was fixed, the day was nearly at an end and so, with closing time fast approaching, we opted to spin into the next pub on our route.

The pub transpired to be the Blackwater Tavern and it was, as one customer put it, ‘packed to suffocation’. As we inched our way through the heaving throng, it slowly became apparent that we had arrived at the wake of the oldest cow in the world.

I had not heard of Big Bertha before but her wake has been one of the highlights of my life.

Many hours later I got talking to Jerome O’Leary, since sadly deceased, who told me of her amazing role as a fundraiser and how he used to give her a drop of poitin or whiskey to steel her nerves against the maddening crowds.

It was Jerome’s intention to have Big Bertha immortalised by a taxidermist and he did just that in the ensuing months. After Jerome’s death, Big Bertha passed to his friend and neighbour George Kelly who put her on show at his Hazel Fort Farm in Beaufort, County Kerry.

There are still less than 400 Droimeann cattle left. At Killrowan Farm, kinsmen of Jerome declare themselves ‘custodians’ of the breed and their stock includes the daughters, grandchildren and great-grandchildren of the redoubtable Big Bertha. 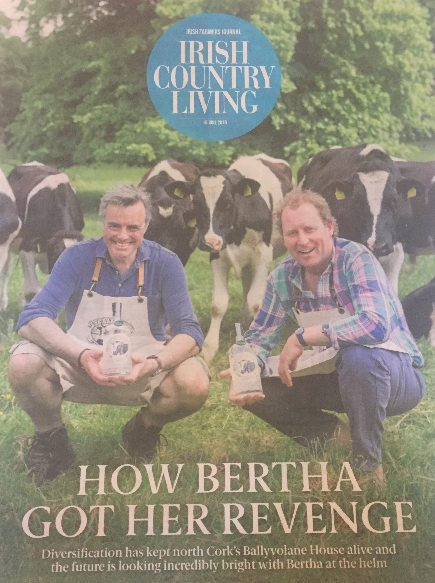 Justin and Antony on the cover of Irish Country Living.

I wrote about our attendance at Big Bertha’s wake for an article that was published in The Guardian in 2010. (See here) The story caught the eye of my good Dublin and Hong Kong pal, Justin Green, proprietor of Ballvolane House, the multi-award-winning guesthouse near Castlelyons in County Cork. In early 2015, he had teamed up with his friend Antony Jackson to create this new Irish gin in which the base spirit is made from whey, a dairy by-product, rather than the traditional wheat or grain. The concept of using whey was developed by a local cheese company, with counsel from Charles Maxwell, Master Distiller at the Thames Distillery in London.

‘Using whey milk for the alcohol is unique’, says Justin. ‘Ballyvolane translates as “place of springing heifers” in Irish so, between that and the whey, we realized our gin had a bovine theme. We began hunting for a good name for the gin and I came across Turtle’s story of Bertha who was not only the oldest cow in the world but who gave birth to an eye-bulging 39 calves over her lifetime.’

In advance of the launch of ‘Bertha’s Revenge’ in December 2015, Justin and his then fourteen-year-old son Toby drove to Hazel Fort Farm to collect Bertha and bring her north to the capital city.

‘I was slightly nervous as it’s really quite a responsibility ferrying the remains of the oldest cow in the world around Ireland,’ recounted Justin.

‘The day we chose was one of the wettest of the decade. Orange weather warnings, vicious winds and severe flooding. We collected her successfully but as we crossed the border from Kerry into Cork, the river burst its banks. The water was flowing high and fast across the main road and literally eating up chunks of tarmac in front of us. We stopped to assess the situation. With Bertha in the back of the van we couldn’t run the risk of her being damaged.’ 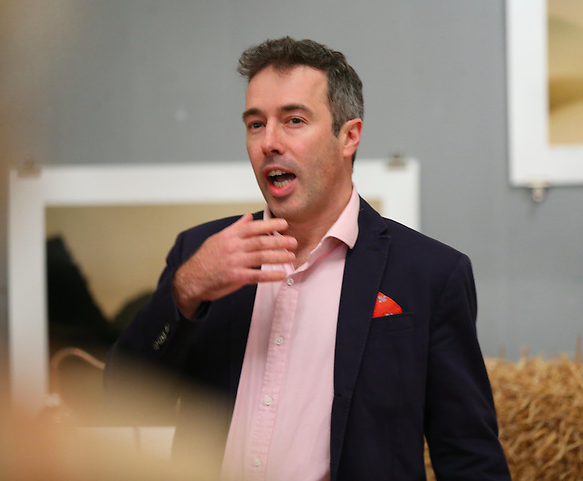 ‘And then, on the far side of the flood, a wine-coloured Nissan Micra appeared over the brow of the hill and drove through the flood towards us, with much grinding of gears and engine revving. It kept on going and as it passed I looked in to see five elderly ladies with beaming, triumphant smiles and a white-knuckled clenched fist punching the air.’

‘We cheered and clapped them on and then we drove gingerly through the flood and made it through without Bertha getting wet. When I gave Antony a blow-by-blow account of the epic journey, he said it sounded like Hannibal crossing the Alps with his elephants.’

Upon arriving with their precious cargo onto Dublin’s South William Street, the Greens enlisted some presumably rather startled pedestrians to help carry Bertha upstairs to the Octagon in Assembly rooms where Daniel O’Connell held court 200 years ago. The good Samaritans were rewarded with a bottle of Bertha’s Revenge Small Batch Irish Milk Gin shortly before its official launch that very evening.

‘The gate is down and the beast is wild’, concluded Justin. 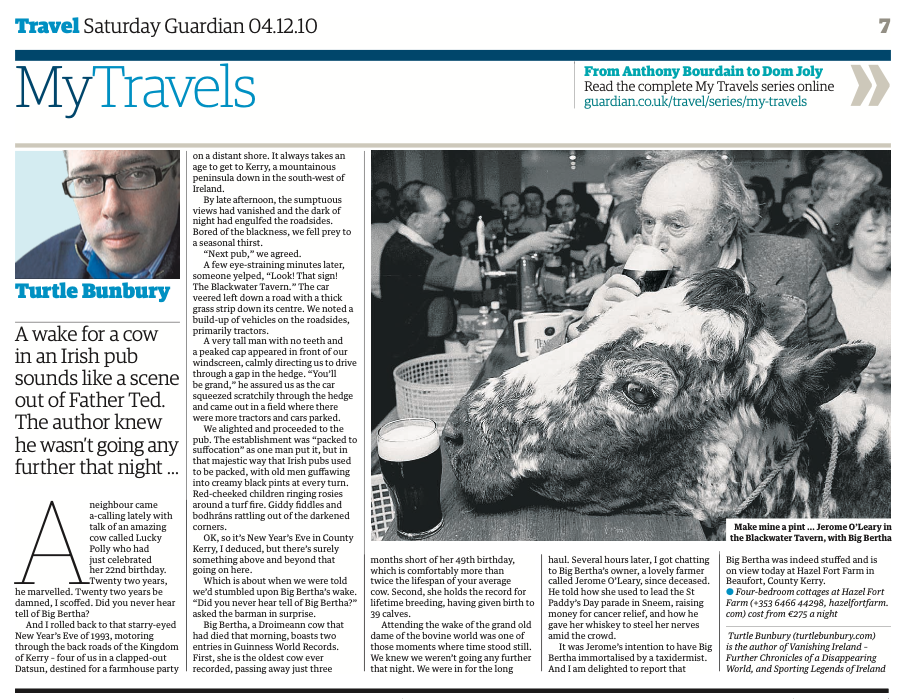