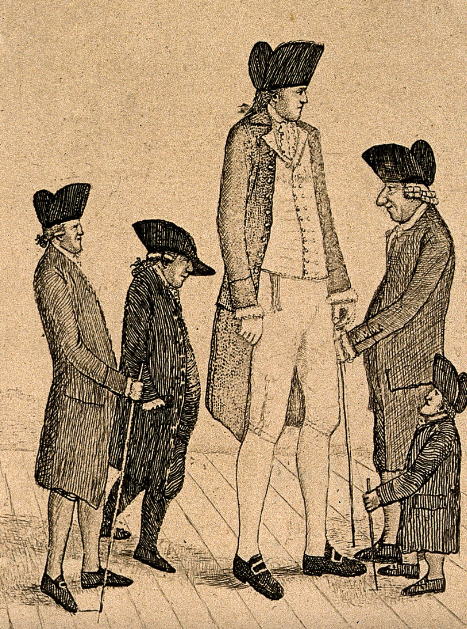 It’s not often that a funeral director buys everyone a drink, but this undertaker had his reasons. As the grateful and mostly Irish mourners supped upon free ale in an Essex pub that hot summer’s afternoon in 1783, the undertaker slipped out the back door. He made his way to the barn where the enormous coffin was stored, opened the door and whistled softly.

From the hedgerows emerged a group of disreputable men who had lately been hired by Dr John Hunter, one of Georgian Britain’s most eminent surgeons.

Quickly and noiselessly the men opened the coffin, tipped the dead Irishman out, carried the corpse to one of the barn walls and covered it in straw. They then filled the empty casket with flagstones, sealed it up again and vanished back into the hedges.

It wasn’t perhaps the easiest body to hide. The dead man was, after all, reputedly the tallest human being the world had ever known.

But the spirit of the giant must have been bellowing from the Otherworld as his friends ambled out of the inn and began following his empty coffin over the horizon.

His worst nightmare was about to come true. His body was going to be dissected by scientific scalpels. But the giant cannot have known that the abduction of his corpse would one day prove a blessing to other giants through the 21st century magic of DNA.

Charles Byrne was born in the small village of Littlebridge, County Derry, in 1761. Nothing is known of his early life save that none of his immediate family were of any remarkable size. [1]

During his teenage years, Byrne kept on growing higher and higher so that, by August 1780, the 18-year-old measured a neck-bending 7’7”.

Realizing that he could make a small fortune if he became a pay-per-view human curiosity, Byrne sailed for Scotland, his mother’s homeland, and began exhibiting himself in Edinburgh.

Contemporaries recall how he had such difficulty getting up and down the narrow stairs of the city’s Old Town that he was obliged to crawl on all fours. There is also a record of how he terrified the watchmen on Edinburgh’s North Bridge one foggy winter’s morning by lighting his pipe on a streetlamp ‘without standing even on tiptoe’.

He started on a tour of country fairs and village greens in Scotland and northern England, marketing himself as the Irish Giant. The tour was a runaway success and he made his way south to London, arriving on 11th April 1782.

He initially established his quarters in Vauxhall Gardens, a ‘large, elegant room’ in ‘the cane shop, next door to late Cox’s Museum, Spring Gardens’. Shortly after his 22nd birthday, he moved to ‘an elegant apartment at Mr. Mittenius’, confectioner, Charing Cross,’ where he charged people an admittance fee of 2 shillings and sixpence to see him.

He clearly knew his target audience. ‘To prevent an improper mixture of company’, counselled the advertisements, admission would be two shillings ‘from eleven in the forenoon to four’ and one shilling ‘from four to seven at night’.

London quickly fell for the charms of a man who, aged just 21 years, was now hailed as the tallest man in the world. His height was variously billed at between 8 ft 2 and 8 ft 4; is the skeletal evidence downsizes him to 7 ft 7.

On 6 May 1782, one reviewer gushed how ‘neither the tongue of the most florid orator, nor the pen of the most ingenious writer, can sufficiently describe the elegance, symmetry and proportion of this wonderful phenomenon in nature.’ [2]

Byrne himself assured his audience that ‘the admirable symmetry of [his] body [was] esteemed to be the most proportioned ever seen.’ The diarist Sylas Neville, who saw Byrne on 4 July 1782, agreed that ‘nature has exceeded her usual limits in a most astonishing degree’. [3]

Byrne was in fact rather knock-kneed and short-armed. But that did not stop him becoming perhaps the most famous Irishman in London that summer, not least when the Haymarket Theatre named its hugely popular pantomime ‘Harlequin Teague, or The Giant’s Causeway’ in his honour. [4]

With fame came fortune. He commissioned a series of custom-made giant-sized beds, chairs and tables, and then advertised himself as available for the public to view. Londoners were warned that his stay would not be long; ‘he proposes shortly to visit the Continent’.

However, Byrne was destined to be an early example of a young person destroyed by all-too-quick celebrity.  This was, after all, the bawdy, drunken London so vividly depicted by Hogarth’s cartoons and Byrne was rapidly absorbed into this unseemly canvas.

He drank copious quantities of whiskey and gin every night. Inevitably, it began to affect his career. Shows were frequently cancelled because he was too drunk or failed to appear.

By November 1782, he had relocated to the Hampshire Hog, No. 1 Piccadilly, where he pitched himself as “the greatest natural curiosity ever seen in this or any other kingdom”. A few months later, the ‘Irish Goliath’ moved to an apartment at 12 Cockspur Street, off Pall Mall, belonging to a Mr. Haynes. He had his portrait painted by the Scottish engraver James Kay. However, the public’s patience at his drunken antics was waning and his audience was in decline. He took up work as a porter at St. James’s Hotel but the job didn’t last long.

One night in April 1783 he went on a massive binge at the Black Horse Inn, awakening to realise he had lost his £770 life savings which he had rather foolishly condensed into two checks. [5]

Riddled with tuberculosis and virtually insolvent, the Derry man took to drinking with even greater determination.

As death became increasingly inevitable, surgeons began queuing up to claim his body for scientific research. Byrne was so appalled by the prospect of his body being chopped up by surgeons that he requested his friends bury his ‘ponderous remains’ far out at sea in a sealed lead coffin.

He was particularly fearful of John Hunter, a shady Scottish surgeon who had been appointed personal surgeon to George III in 1776. (John Hunter’s brother William Hunter, who died on 30 March 1783, was personal physician to Queen Charlotte from 1764). Hunter was widely reputed to have close ties with London’s body snatchers and was also linked to the abduction and murder of several pregnant women at this time, possibly for scientific research.

Hunter assigned a servant to keep watch on Byrne and to report to him the instant the Irishman was dead. According to the Annual Register, Byrne died at his apartment on Cockspur Street on 1 June 1783. Cause of death for the 22-year-old was given as excessive drinking.

Four days later, a London journal reported that ‘the whole tribe of surgeons [have] put in a claim for the poor departed Irishman and surrounded his house just as Greenland harpooners would an enormous whale.’ The same journal added that: ‘One of them has even gone to the trouble of having a niche made for himself in the giant’s coffin in order to his being ready at hand on the witching time of night, when church-yards yawn’.

Such clamouring appeared to be in vain as Byrne’s coffin made its way out to the Downs for its sea burial. On 9 June, the Edinburgh Evening Courant confidently assured readers that Byrne’s coffin had been ‘thrown into the sea, agreeable to his own request, he having been apprehensive that the surgeons would anatomize him’.

However, in truth, Hunter had paid the undertaker a massive £500 to snatch the body before the coffin headed to its deep sea grave. Hunter then took the body to his premises on Leicester Square, London, where he boiled it in acid to remove the flesh.

Five years after Byrne’s empty coffin slid into the cold sea, Hunter published an article describing Byrne’s anatomy and skeleton. He simultaneously exhibited the skeleton in his museum as one of his most prized possessions. It remains on display in the Hunterian Museum at the Royal College of Surgeons in London. When Joshua Reynolds’s painted Hunter’s portrait, he included the legs of Byrne’s giant skeleton in the background.

Remarkably, Dr Hunter’s appalling actions has done modern day giants an enormous service. In 2011, a report was published by a team of British and German scientists, led by Dr Marta Korbonits, who had extracted two of Byrne’s molar teeth to examine its DNA.[6]

Despite the fact Byrne’s corpse had been boiled in acid and placed on public display for over two centuries, the DNA remained intact. The scientists discovered a mutant version of the aryl hydrocarbon-interacting protein gene.

Dr Korbonits deduced that Byrne and these modern giants had a common ancestor between 57 and 66 generations ago. Her suspicions were raised when she saw a drawing of Byrne standing with the Knipes, twin brothers from Ulster who were also giants and who claimed to be related to Byrne. That, she said, ‘suggested it was a genetic disease.’

It seems likely the Irish Giant will continue to leave his massive footprint on the world for many decades to come.

[1] According to the Gentleman’s Magazine 1784 (Vol XXXIII p 541), neither his Irish father, Scottish mother, brother ‘nor any other person of the family was of an extraordinary size’.

[2] The full text ran: ‘However striking a curiosity may be, there is generally some difficulty in engaging the attention of the public; but even this was not the case with the modern living Colossus, or wonderful Irish Giant … the most penetrating [witnesses] have frankly declared that neither the tongue of the most florid orator, or pen of the most ingenious writer, can sufficiently describe the elegance, symmetry and proportion of this wonderful phenomenon in nature .’

[3] S. Neville, ‘Saw Byrne, the famous Irish giant, in whose person nature has exceeded her usual limits in a most astonishing degree’.

[4] The book of days: a miscellany of popular antiquities in connection with the calendar, including anecdote, biography, & history, curiosities of literature and oddities of human life and character, Volume 2, Robert Chambers (W&R Chambers, 1832).

[5] A man called Atkinson was later charged with this theft.

[6] Dr Marta Korbonits is professor of endocrinology and metabolism at Barts and the London School of Medicine and Dentistry. They reported their finding in The New England Journal of Medicine on 6 January 2011.

[7] In 1909, the American neurosurgeon Harvey Cushing studied Byrne’s bones and discovered a rare pituitary tumor at the base of his skull.