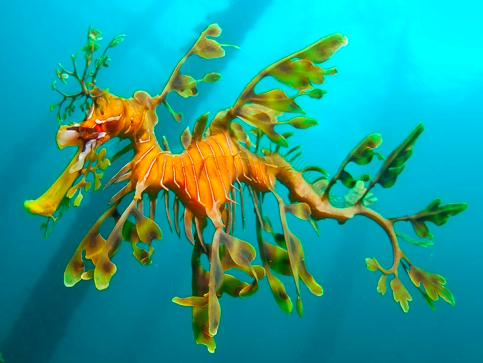 Our friend Sherry the air hostess secured a hat-trick of tickets from a friend of hers called Mike. He used to work at Continental too but got sacked and now works for the Tampa’s Florida Aquarium. He reckoned doling out 3 x $13.50 free entries might warrant him one of those standby “buddy passes” from Sherry in the future. The aquarium was a good lark. Jim got off to a bad start in the very first corridor. Two large windows full of fish, all shapes, big sizes, mainly dull silver and grey colours. He wrinkles his nose, rolls his eyeballs, says it’s cruel to have so many fish banged up together in such a wee space, nowhere near enough freedom. I look at the fish, their gaping gobs, pouting, opening and shutting. It didn’t seem to me like they gave a flying feck where they were.

Mike tells us the whole place has been designed so that as you go deeper into the Aquarium, the creatures on display start to represent creatures of greater depths. And so we arrive out into this vast soccer pitch sized arena where there is a small and helpful sign telling us the name of the duck that’s presently sitting behind that sign. What’s weird is that this duck doesn’t have to be sitting in that particular spot. There’s no fence or anything. It could be anywhere in the whole place. 10 minutes of waddling and that duck could be living it large with the hammerhead sharks way down the other end of the place. And yet there it is, chilling out behind its sign, just like it should be. Jim and I probe around for signs of string. Maybe it’s got a foot tied to a wall. Or been frozen in liquid nitrogen. Maybe it’s stuffed. But nope, the duck’s real, free as you like. A goody goody duck, not going anywhere it oughtn’t to.

As we wander around, the same thing keeps happening. A sign says this is a black browed heron, you look up and there winks the promised black browed heron, again free as you like to be anywhere in this entire building other than on this signpost. Same deal with the oystercatcher and a yoke called a stilt, a pretty white fluffy featherbrain that sleeps standing upright on a foot-long spindly leg, the other leg tucked discreetly up his bum. And then there was the Great Egret, lesser spotted since their plumes became a popular accessory to ladies hats in the early 1900s.

Even the predators seem to have succumbed to this conditioning conspiracy; one sign tells us that the vicious tubby two-whit two-whoo owl perched above us in the trees likes nothing better than to feast on duck, but how come it ain’t swooping down on the ducks sitting pretty all over this place?

The otters might’ve given us an explanation but they were crashed out when we got to their abode and they weren’t getting out of bed for anything less than 10 million buckets of fish a head. We let ’em snooze on.

Fish are always weird gadgets. Sturgeon are exceptionally weird. They’re almost cute, teddy bear fish, a tiny wee cartoon mouth hupping and pupping in the last place you’d expect it to be. They share a flat with a heap of snapper and some of my old amigos, the Red Ear Slider Turtles, all the way from the Mississippi Delta.

Next door lives a herd of baby American Alligators. These lads sleep in a standing up position with every part of their body submerged in the water bar their nostrils and their eyeballs. They can get big too – a male will push 16 foot, a female closer to 10, either can live for 70 years.

An unusual bedmate for the alligator is a minute fish no bigger than a human thumb and known, enticingly, as a Mosquito Biter. These are the maritime equivalent of the heroic furry-footed long-snouted anteater. These guys eat mozzies. They source out the hideouts where mozzies have stashed their larvae and they gobble the lot up. Each of the biters can eat its own body weight in mozzie larvae every day. I’d have thought it’d make sense to breed these fish by the multitude and release them into the swamplands of this distracted planet and so assist in the extermination of malaria, but maybe I’m on the wrong track. I am, after all, the same ejat who reckoned breeding red squirrels for country estates and golf courses would be a money earner.

Snakes are peculiar if only for the fact they rock up in Aztec, Christian, Egyptian, African and Australian culture as a symbol of rebirth. Perhaps it’s the skin-shedding business. I’d never seen a snake shed its skin before. What I got to see was something called a Reticulated Python claiming to be the biggest python in the world and capable of devouring small boys whole. He was sound asleep, surrounded by mounds of flaked off skin and a violently large pile of freshly squeezed oozing snake log. If I looked in his cage for 22 seconds, that was 17 seconds more than anybody else I saw.

You learn funny things in a place like this. Like I didn’t know tarantulas were harmless. Or that “blind as an electric eel” is an apt expression for a creature that can still release a 650 volt jolt, enough to cripple a horse. I knew about the frogs that mooed but I didn’t know there were frogs that went baa too. Or that vampire bats eat cow’s blood. I saw a Moray eel drift by with its sexy yellow tights on and I thought that’s where they found the mermaid. And I eyeballed what’s called a shovelnose guitarfish which was a first for me. The stingrays, some of them capable of surfer-muching, floated around eerily, to all intents and purposes the prototype for the Stealth bomber.

The seahorses are among the madder yokes on display. For instance, the thumbnail sized pygmy seahorses scoffing crumbs from their underwater mangers. But, without a doubt, the winner of the weirdest looking geezer award went to West Australia’s Leafy Seahorse, one of those mythological q-shaped gadgets only amplified in weirdness because they look like branches and they’re covered in translucent frilly green and yellow leaves. It’s almost disturbing to look at because then you have to start questioning what’s a plant and what’s an animal and, somewhere in the back of your head is the way that catfish was calmly sizing you up earlier and the way Mike was saying all the fish charge over to one end of the aquarium at feeding time because they’ve seen their feeder’s magic uniform and, yep, there’s always JM Fennell saying fish ain’t all as stupid as they look. With the nations of Europe sticking feet in their mouths all over the place right now, the last thing I needed was hints of evidence that lobsters and cabbages are actually first cousins with high IQs and sensitive souls. That said, I go and look at the jellyfish later and I’m left with the conviction that these guys are also more plant than animal. And then I remember my US Marine pal in Hawaii who got stung on his dickydido while skinny dipping and I wonder do these wee rubbery flubbery tentacled Pacman ghosts have a sense of humour?

We finish up in Shark Land. Mean looking buggers, no doubts. But Spielberg has a lot to answer for. The PR of Sharks Unlimited went big time downhill after “Jaws”. Nobody gave a hoot about them. Kill ’em all. Serves them right for tearing Bo Derek in two like that. How about this: sharks kill approximately 10 humans every year; humans kill approximately 100,000,000 sharks every year. That’s what it says in the Tampa Aquarium. They kill ’em for shark fin soup and pharmaceuticals. Other titbits? Only 2 out of 3 shark attacks are fatal. Only 4 of the 29 species of shark actually attack humans without provocation (they are the great white, the bull, the tiger and the oceanic whitetip). I look at one of the more toothy buggers and try and work out what I’d do if caught in a corner by one. I reckon I’d try and stick my hand in its side gills and yank them off, like a pocket, so it starts to bleed and runs away. Doubt it’d work but can’t think of much else that would.