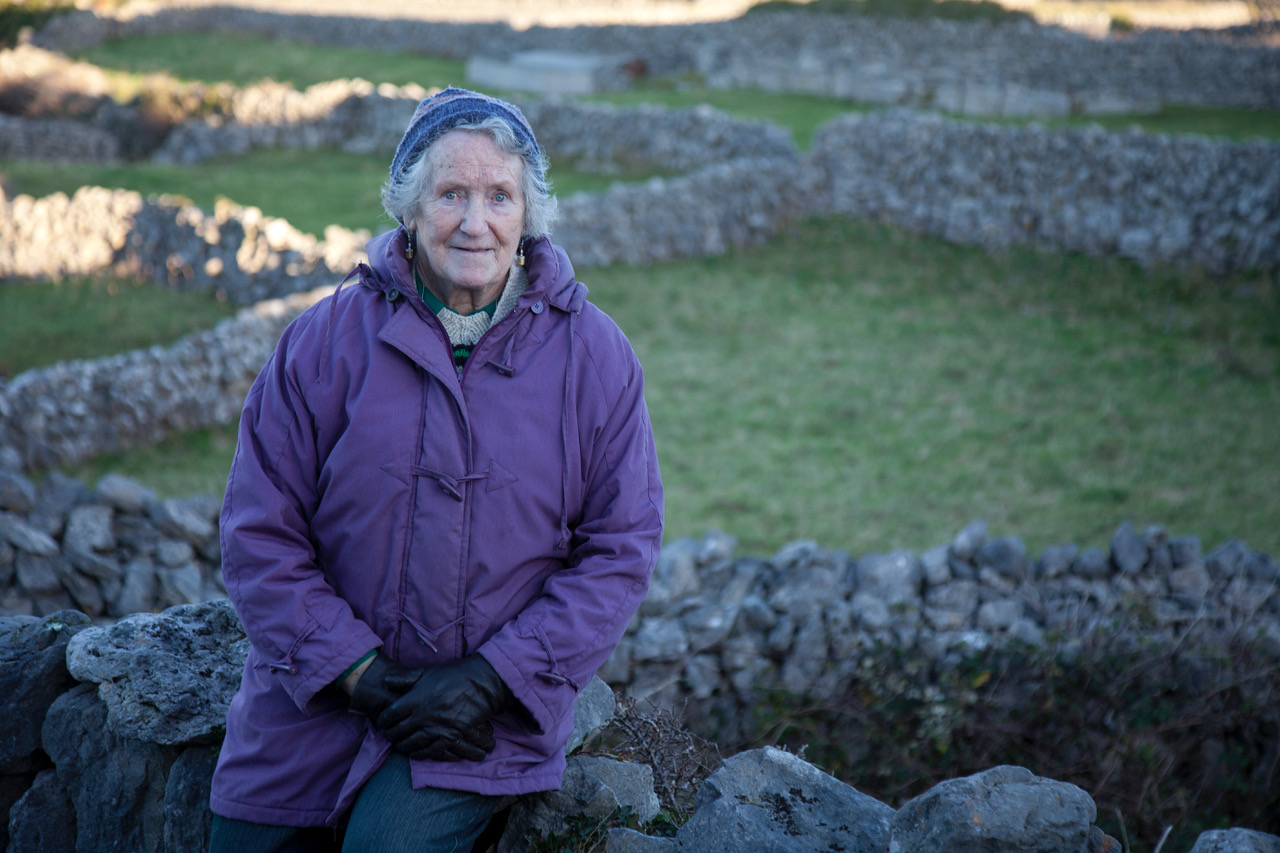 Everyone had a donkey, but there’s only two left on the island now.’ Photo: James Fennell.

Born in 1929, the former District Nurse reflects on working as a midwife in Tottenham, London, and life in Lurgan village on Inisheer in the Aran Islands of County Galway. Roisín Ui Chualáin passed away in University College Hospital Galway on 22 March 2022.

In 1961, a thirty-two-year-old nurse from County Meath stepped off the ferry at Inisheer, the smallest and most easterly of the three Aran Islands in Galway Bay. Róisín Maguire had been assigned to work on the island for the next year. Over half a century later, she is still there.

Róisín was born in December 1929 on a farm at Annagh, near Oldcastle that her father, Brian Maguire, acquired from the Land Commission. Aided by his brothers, Brian built a farmhouse, employing a local carpenter called Bartle Monahan to undertake the joinery work. Brian was clearly so impressed with Bartle’s work that he married his sister Mary Monahan in 1913.

Eight children followed, of whom Róisín was the youngest. Death stalked the family in the early 1930s. Róisín was still a baby when one of her small brothers died. The following year, her father Brian succumbed to pneumonia.

Róisín’s eldest brother, Jim, took on the farm and helped Mary raise the younger children. Róisín fondly recalls how he would tease her as a child. Along with her other brothers, Jim hurled for the local team. He also crafted a small hurley stick so Róisín could play with them by the side of the house.

By 1934, four-year-old Róisín was walking to school, a two-mile dash through the fields to an old church in Carpenterstown. ‘We went barefoot from the first of May through until November. Splashing into all the puddles! Our feet got so hard that you’d barely notice the thorns. My mother would take them out and eventually I was able to take them out myself.’

In the winter, the Maguire children collected timber from the wood on their land which they brought to school and placed on one of the two fires that burned at either end of the old church. In the summer, they came with bottles of milk. ‘And if it was a hot summer, the milk was probably gone sour by the time it was lunchtime.’ Lunch itself was ‘a couple of pieces of brown bread with butter and jam in it – if there wasn’t jam in it, I wouldn’t eat it.’

‘I think everybody hated school in those days,’ she muses. ‘The stick was used so frequently, it’s not surprising. There was hardly a day when you didn’t get beaten for something. Maybe you’d be writing with a pen and a big blob of ink would come down the pen, because you weren’t used to it, and then you’d get a slap for blobbing.’

‘I was very happy away from school,’ she recalls. ‘Even though we had very little and everyone was very poor. If you were big enough, you had to help out, weeding potatoes and turnips. I liked the haymaking but, later on, I had to help my sister Cáit tie the sheaves and that wasn’t so nice! My brother Tom cut the wheat with a scythe. Lawrence made the sheaf and I would come in after and tie them up. You’d go home with your legs all scratched from the thorns and the briars and nettles or whatever was among it. My mother was always worrying about not having enough money to pay the rent. She worried because when she was young, she had heard of people being evicted. Tom would say, “Don’t be silly, that’s not going to happen.” She always worried about money. But, apart from that, we children were happy enough. We made our own amusements. On long winter nights, we used to play Ludo or cards. Or a neighbour would come in and sit around the fire and they’d talk about things that happened in the past that they heard from their parents. I loved the ghost stories but then I’d be very scared and I’d have to go up to bed with a candle.’

From the age of fourteen, Róisín cycled to secondary school in Oldcastle where, homework aside, she enjoyed her time, emerging as a fluent Irish speaker. However, work opportunities were so scarce in Ireland that she had to emigrate.

In 1948, she crossed the Irish Sea and spent a year working at a convent school in Surrey where the Reverend Mother advised her to either become a teacher or train as a nurse. She opted for the latter, enrolling at the Royal Northern Hospital on Holloway Road in London.

By 1956, she was operating as a midwife in Tottenham for the Royal Northern, as well as Guy’s and Alexandra Park. This was the era depicted in the popular BBC television series Call the Midwife. Róisín also found time to enjoy life in a city that was rapidly moving away from the horrors of the wartime Blitz into a new age of Queen Elizabeth II and reconstruction, The Goon Show and the Ealing comedies. ‘Oh, we had a great old time when we were off-duty,’ says she. 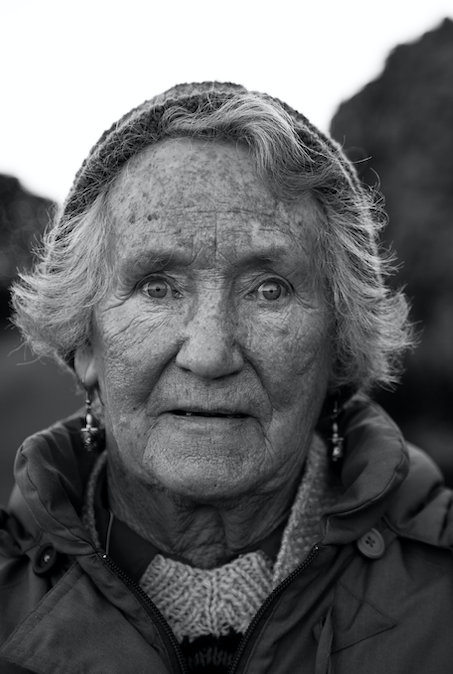 Nonetheless, she yearned for Ireland, especially after visits home. ‘Once I got to England I was okay, but it broke my heart every time I had to go back.’

She finally returned to Dublin in 1957 and worked at St Kevin’s Hospital (now St James’s) for the next two years. If she had a night off, she would head back to her family home in Meath, covering the fifty miles in an epic two-and-a-half-hour journey on a scooter. After a crash left her with a black eye, she set aside the bulk of a week’s wages for a helmet.

In 1961, she embarked upon a six-month course as a district nurse with the Jubilee Nurses. This organisation was founded by a group of Irish Protestant ladies in the late nineteenth century to provide trained nurses who could care for patients in their own homes. Once she’d passed the test, they sent her to Inisheer.

It was supposed to be a short stay. And then she met Máirtín Folan on a visit to the twenty-six-acre farm where his elderly parents lived. ‘We were married in Galway in February 1963. The guests came from all over – friends from Dublin, family from Meath and some of the islanders took the boat across.’

Eight children followed, which ensured Roisin was flat out keeping house for the next couple of decades. ‘You get a routine going but between the cooking and the washboard, there wasn’t a lot of time. You’d always be trying to catch the fine weather to dry the washing on the line.’ The children are now scattered across the globe – Adelaide, Kentucky, Nottingham, Ennis.

The beautiful, low-lying Atlantic island of Inisheer is arguably best viewed from the air where you can see the intricate network of limestone walls, built by hardy men in centuries past. The walls were designed both to create fields from the broken ground and to provide shelter for cattle. The stone walls were also good at retaining heat, enabling the island to enjoy a micro-climate.

Roisin found island life difficult in the early days. ‘Not having electricity was the worst,’ she recalls. ‘I had a little electric radio that I brought everywhere but I couldn’t use it.’ There was also a melancholy air because all the other young people ‘kept on leaving’ the island. Two of Máirtín’s sisters moved to Boston while his brother settled in Hartford, Connecticut. Other islanders opted for California, Chicago and Springfield.

When we met Róisín, she took us for a walk to the ruins of a small tenth-century church near her home which was named for St Gobnait. Her island eyes rolled slowly over the contours of the hollowed-out stones outside the church and the dry-stone beehive huts where the early Christian monks lived.

And as she looked, she spoke. About her trip to see her son in Kentucky. About the evenings in the island pub where she would play fiddle and sing songs and converse with everybody else in Irish. And about the inevitable changes she has seen.

The biggest change has been social. Most islanders, be they indigenous or newly settled mainlanders, have a car to which they tend to retreat after mass, where a generation earlier people would have stayed around to chat. The nightlife has also changed with musical evenings now a rarity although the island pubs still do a reasonable trade.

And as for the island’s animals, while there used to be horses and goats everywhere, now there are hardly any. ‘Everyone had a donkey,’ she says. ‘But there’s only two left on the island now.’

As she heads towards her eighty-fourth year, Roisin keeps busy at the Áras Éanna Art Centre where she gathers with other women from the island every Wednesday to crochet and knit. They are a versatile crew and occasionally they are to be found eyeballing a computer screen or rolling out their yoga mats.

‘It’s a long way from Tottenham,’ says Róisín. ‘But that was sixty years ago!’