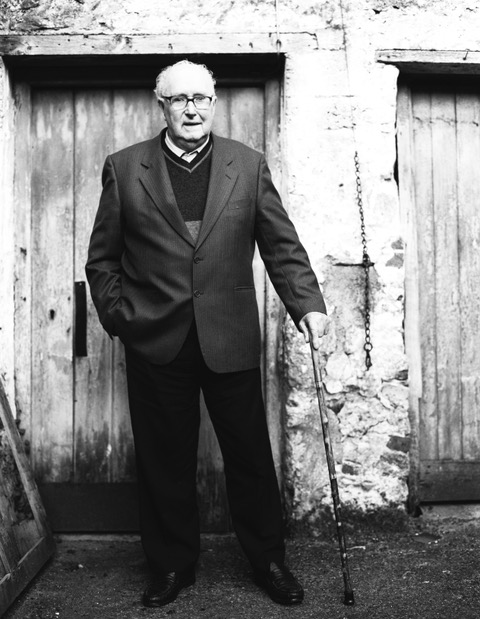 Rory Kilduff. Photo: James Fennell. Terry Fahy of Ballinasloe captured some invaluable footage of Rory and his shop on video back in 1993.

‘Those stories I told you are true,’ says Rory Kilduff, leaning back in his armchair, ‘but I could make up a few if you’re stuck.’ His wife, Maura, plants a tray of biscuits and tea on the table and beckons us help ourselves.

In the space of thirty minutes, Rory has already unleashed a dozen yarns relating to the life and times of Ballinasloe, the east Galway town where he has lived for the past eighty-four years. He is absolutely delighted by the opportunity to recount his memories aloud. Barking a familiar cry about the disinterest of youth – ‘the television has made everyone so smart we’re all gone cracked’.

He describes his childhood as ‘a comical time’. In summer months, ‘a contrary fellow’ named Burke drove a horse and water-cart down the streets to keep down the dust. ‘We all wore short pants at that time and so we would get rid of our shoes and follow the cart and splash in the water jets.’ Burke was unimpressed. ‘He would let the whip fly and, if he got you, he’d cut the ear right off of you. “Let the water on the road.” he’d say. You’d think we were going to put it in our pocket and bring it home.’ There can be little doubt Rory and his pals weren’t all sweetness, as he tells a tale of them sneaking up to the bank manager’s tennis courts and ‘parroting the well-to-do voices’ of the players until the bank manager gave chase, but ‘sure, we were only eight or nine and he wasn’t ever going to catch us’. A while later, the young crew were gawking out the window from Cullen’s the Drapers to watch the arrival of electrification in 1929. ‘T’was a wonder of the world seeing this light going on.’

His merry bespectacled eyes beam at the memory of the night Old Man Higgins lit an ill-advised fire out the back of Harper’s hardware store and nearly burned Ballinasloe to the ground. ‘Harper’s used to sell guns and gunpowder for all the muzzle loaders out the country,’ laughs Rory, who was seven at the time. ‘The explosion blew all the windows out of Society Street and every second ceiling fell down.’ Higgins was exceedingly fortunate. ‘It’s a strange thing but gunpowder apparently takes the easy way out and the blast went out over him.’

If Rory has a moral to this story it is that ‘the people who had their windows blown out never looked for a penny’s compensation’. He says nobody ever sought or expected compensation – not until the motor car began knocking people about. Like his neighbour, poor Margaret Doran, who became the town’s first road victim when killed by a reversing Buick at the Fair in January 1928.

‘She was a miser,’ says Rory conspiratorially. ‘She made her fortune by selling turf to the poor for a penny a sod. A week after her death, her husband went into a shop on Main Street with 600 sovereign coins and said, “Give me paper for that … this is far too heavy to carry.”’

Rory is entitled to cast a dirty look at the motor car because the car and the tractor put paid to the Kilduff’s family business as saddlers. The family involvement began in about 1880 when Rory’s father, the son of a farmer from Kilbegley, purchased the saddlery from his former employer, Mr Grainey. During the Land Wars of the late 1870s, the older Kilduff assisted Mr Grainey in making a particularly beautiful harness for a local gentleman with buckles and fittings that were silver-plated in Walsall, England.

When the gentleman was subsequently assassinated, Grainey wrote to the dead man’s brother in England requesting payment. By chance this brother was director of the Walsall silversmith.

He wrote to Grainey: ‘If you and your countrymen didn’t shoot my brother, I’m quite sure you’d have got paid for your harness.’

Grainey replied: ‘The pity of it was that me and my countrymen didn’t shoot you and your brother long ago, and I’d still have me harness.’

And that, concludes Rory, ‘finished the deal’.

Rory had not intended to become a saddler but his father had a heart attack and he was obliged to plug the gap. Then his younger brother Brendan died, of meningitis, on his eighteenth birthday and his only sister had married and moved on. ‘It was a slow old thing to learn and I didn’t know anything much but I was able to cut out the patterns of the saddles and collars.’ With the outbreak of the Second World War, ‘it got busier and busier and I learned it’. But then ‘the tractor came in and [the saddlery business] died’. An old farmer called Paddy Walsh made a concerted effort to stop the rot. ‘He went walking up and down outside the Dáil with a placard that read: ‘No Tractors in Ireland’ … wasn’t he fierce daft! Poor Paddy!’

Rory walks us out to the rickety old saddlery yard adjoining his three-storey home on Ballinasloe’s Main Street. He shows us the workshop where, in his youth, twelve men worked full-time, making harness straps for driving horses and draft horses, purpose-built for ploughing fields and cutting hay. He shows us the ghostly relics of harnesses, pommels, bridles, nose-bands, gauge knives, collar-irons, silver plate buckles, floppy stirrups and broken mallets. The air is scented with leather. He says there is absolutely no demand for harnesses today – ‘save for the Travellers’.

As we walk about, Rory relives the days when all the rollers and drums and mallets and hair-machines were clanging and clinking. He says that, as Kilduff’s were the only saddlers in Ballinsloe, life was particularly hectic during the annual horse festivals. ‘When I’m dead and gone nobody will know what all these things were for!’ he chuckles, tapping a classic Harland & Wolff hames collar with his cane.