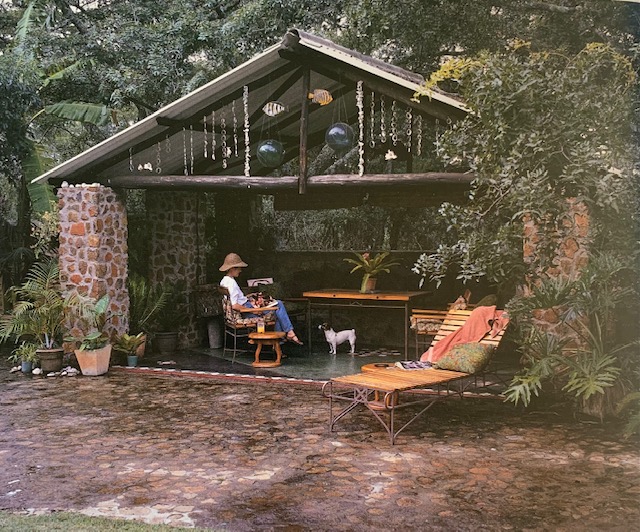 An adventurous artist, whose life sounds very Wilbur Smith, Soo Piercey bought a Zimbabwean tannery for storing elephant hides and leopard skins. It became home to her collections – including the craft of over twenty African tribes, as well as her own extraordinary works, painted over the course of her extensive wanderings. You can find out more about Soo via here Instagram page here.

“I’m still here. I’m hanging on by the skin of my teeth but I’m still here. All my belongings are packed and ready to go. My house is a shell. There’s an army general just waiting for me to leave before he moves in. He already has 14 farms in the area. I’m expecting a knock on the door at any moment. But until that happens, I’m staying put”.

Brave words from artist Soo Piercey speaking by telephone from her home in northern Zimbabwe, August 19th 2002. I had heard she was in trouble, that Mugabe’s henchmen had short-listed her family property for confiscation and redistribution. And I knew she would “stay put” until the end because that’s what Soo Piercey is all about. She does not like to quit.

Over the previous 20 years, she had achieved a remarkable amount. Graduated from Cape Town University with a degree in marine ecology in 1981, climbed the summit of Mount Kilimanjaro that summer, spent three years in a wet suit hunting for pearls on De Beers concessions off the coast of South West Africa, sailed from Egypt to Madagascar with her husband, Aidan, operated an air charter business for elitist safari hunters in the Zambezi Valley and, latterly, travelled the rugged highways of West Africa in pursuit of rare trade-wind beads. It’s difficult not to think that the Piercey’s had strolled to life from the pages of a Wilbur Smith novel. 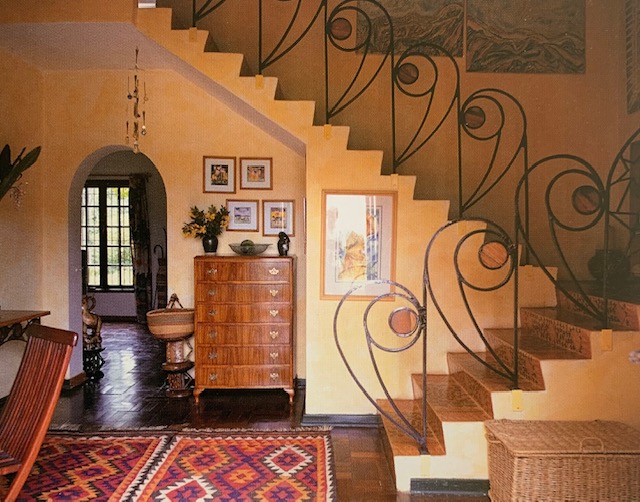 I visited her house with the photographer James Fennell in January 2000, before the repercussions of Mugabe’s controversial land reforms compelled her to pack everything away. It was originally a tannery for storing elephant hides and leopard skins. Soo and her husband took on the building in 1988 and converted it into a home for themselves and their baby daughter Harriet. “It was nicknamed The Yellow Bung! “, recalls Soo. “It wasn’t really fit for living in at all and we had a terrible time getting rid of rats and silver moths who’d been living on the animal hides and skulls for so long”

The image is forbidding but Soo pressed on, working with her husband and some local Shona labourers to convert the tannery into a home. The Yellow Bung underwent its first major transformation in personality when they mixed red anthill grains with whitewash to paint the exterior a merry terracotta red. Thereafter it was “a case of rubbing down and painting up the walls“, filling in the gaps, tiling and boarding the floors, extending the living room to form a courtyard and slapping on a second floor. The tiles were Sitra, the floorboards red mahogany and Oregon pine, the elemental staircase constructed by Sam and Neil Morgan of the Really Different Furniture Company and painted by Soo herself.

By the close of the last century, The Tannery had become famous in Zimbabwean society as a treasure trove of ethnic African treasures, collected by Soo on her travels, then scattered randomly around a family home that successfully managed to eschew the potential trappings of faux museum or art gallery.

“What I like are things that have a function, a previous history, a deliberate design, rather than being purely decorative or aimed at tourists“, explained Soo.

Her collection includes the craft of over twenty African tribes – hanging doors from Mali, tea-chests from the Comores Islands, armchairs from Malawi, kuba cloths from the Congo, wooden masks from Timbuktu, indigo-dipped curtains woven by children in Nigeria, ancient Arabian trade-wind beads found off the coast of Zanzibar. But the key, says Soo, is to juxtapose this hypnotic assortment of valuables and artifacts with art and furniture more familiar to the eye.

I transport myself back to the days before The Tannery was stripped bare. At first glance, the living room appears perfectly straightforward, almost Georgian with the pine floorboards, bonfire red walls, a gonging grandfather clock from Devon and a chest of drawers that don’t quite close properly. On closer inspection, the exotic vibrancy of the African continent erupts; multi-coloured textiles, freeform carvings and serpentine figurines …

The huge cow-hide cushions in the living room were formerly used as beds by nomadic Algerian traders in northern Africa. The traders are known as the Blue Men, Soo tells me, on account of their technique of rubbing their bodies in indigo to fend off mosquitoes and sunburn during their epic caravan treks across the Central Sahara. You can still see traces of indigo on the hide. Close your eyes for an instant and you are a Blue Man, seated high on a camel-drawn caravan, shielding your eyes from the harsh Saharan sun.

This was the essence of The Tannery. The scents and sights of an entire continent, presented in such a way that one could absorb each individual aroma at one’s own pace. Nothing was forced upon you. Soo Piercy purchased all these goods herself and she was always delighted at any opportunity to impart the process of her acquisition, suddenly bringing to life a series of Cowrie shells dangling from a lampshade by explaining them as the last relics of Africa’s oldest currency. 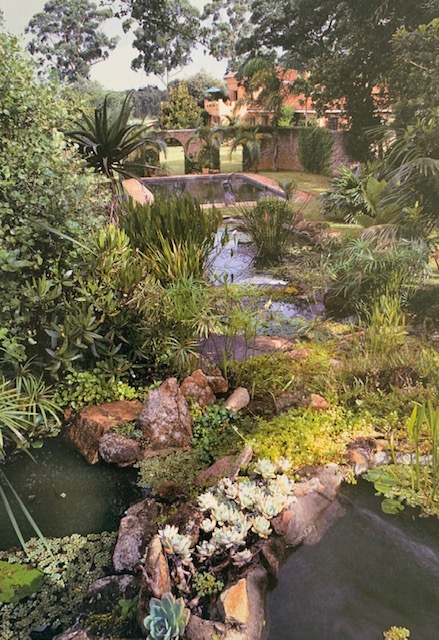 The garden at The Tannery. Photo: James Fennell.

Complimenting this, the walls were hung with a vast collection of Soo’s own extraordinary works, painted over the course of her extensive wanderings. Her artistic evolution is clearly evident – the fun-loving jungle paintings of her earlier years (which she describes as “naïve“), the loud and frustrated splashes of her pearl-diving days and, latterly, inspired by meetings with the Himba and Herero tribes of Namibia, austere and epic landscapes reminiscent of Tolkien. An impressive collection, it was due to be shipped back to Europe and exhibited in Glasgow and Dublin in early 2003.

Outside, a majestic oak tree still towers high over a rock-garden of cascading ponds, filled with koi-carp and tropical fish, surrounded by 21 species of palm tree. On one wall hangs a crumpled bronze plaque her husband found off the Cape Town while on a salvaging assignment. The plaque is in memory of all those who lived in the city’s District 6, “forced by law to leave their homes because of the colour of their skin“. Ironically, Soo had erected five pillars in the garden with a similar message. The Shona are a superstitious tribe and she was hopeful that the sight of those pillars, symbolizing eternity in the Shona spirit world, would stall any marauders plotting to evict her from the premises. It seemed like a last resort but, as any white Zimbabwean would tell you in 2002, a last resort is better than none.

Soo’s voyages and experiences enlightened her considerably on the mysterious ways of the dark continent. When we met her, she had decided to put an end to her roaming and settle down to a more domestic life of gardening, painting and research, only stopping to drive her daughter to and from school. She did confess the occasional urge to head off prawn fishing on the Limpopo River for a while, but insisted these moments passed. Her husband Aidan was yet to stop his adventures, calling Soo on the CB daily at tea-time to report on his progress hunting for rare seashells and fossilized bones on the rivers of northern Mozambique.

But it would seem that fate had more wandering in store for Soo and her small family. The authorities were about to seize The Tannery when I spoke with her. There would be no compensation whatsoever. Soo remained defiantly upbeat. “I feel pretty mobile with my paintbrush. I can up sticks and go on to a new life that is much easier than many others but where will I go? There’s nothing like the life here. It’s exciting. The climate is wonderful. And this is my home. I’m still here. And while I’m here I still have hope“.

This story featured in Social & Personal (Ireland) in August 2002. Soo now lives in Mozambique. As well as being an artist, she has since followed her passion for medicinal herbs, establishing a band called Power for Life and working with traditional healers and local, organically grown herbs. She communicates vis workshops and specialises with children’s issues.  Her greatest success to date involves the use of elephant dung, especially as an enema. www.soopiercy.com