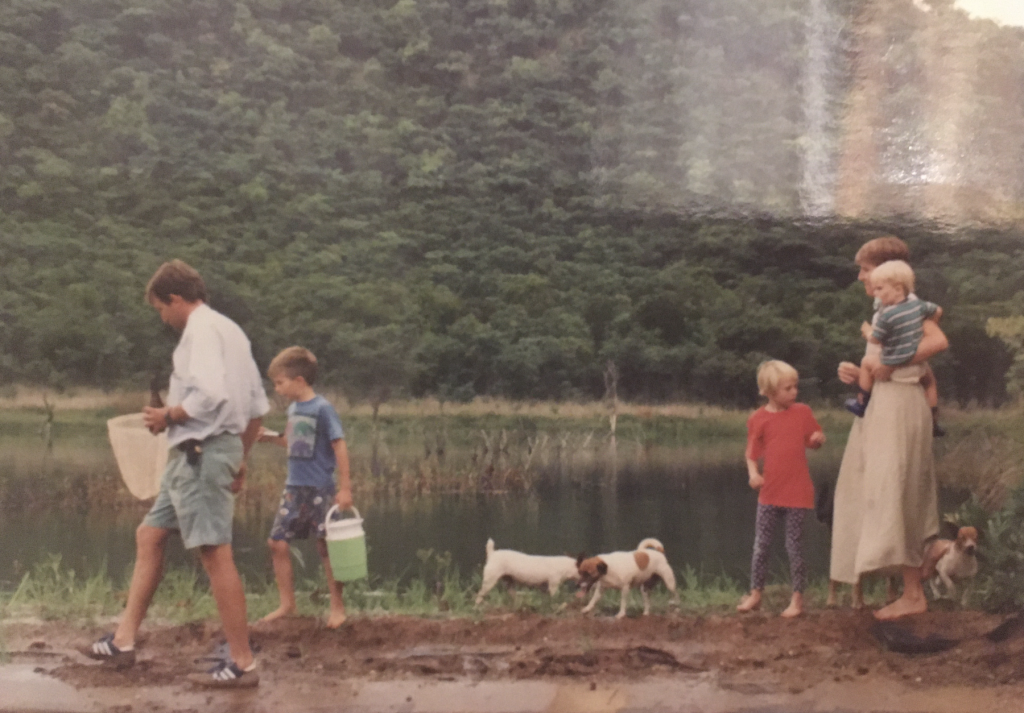 The Stobart family in Zimbabwe, 2000.

“Guinness is good for you, hey!” laughs Bruce Stobart when I ask how he enjoyed his trip to Ireland ten years ago. [i] The Zimbabwean maize farmer and his wife Louise are sitting cross-legged on the front lawn of the farmstead they purchased in 1993, African sun beating down through jasmine-scented skies, three blonde toddlers splashing about in a swimming pool with a giant rubber turtle.

Shortly before they married in 1992, Bruce and Louise spent a few months in Ireland and Britain, visiting cousins, drinking stout, admiring gardens, wrapping up warm. They’d enjoyed the trip, were hoping to do it again. “Yeh, it’d be good to get back there someday”.

The conversation tails off and we swig on our Zambezi beers. We’re all thinking the same thing.

Someday means one day, for a while, for a holiday, but not forever. At least that’s what it should mean. But there’s every chance that ‘someday’ very soon Bruce and Louise, their three kids and the giant rubber turtle will have to dust off their old leather suitcases and hit the high road, buckle up on an airplane, home in on the in-flight magazine, try and get excited about duty free perfume, catch some shut-eye and awaken a few moments before the plane touches down on the cold cement of Heathrow.

When the doors open and the passengers start to dismount, there’ll be a cold blast of air. Maybe the sun will be shining bright and crisp, but the air will still feel cold, and young Harry will hug his mother’s legs to get some warmth. Sophie and Jack will be confused and they’ll be asking questions, just like they’ve been doing ever since their daddy told them to make sure their bedrooms were tidy and don’t be too long saying goodbye to Nadya, the Shona cook who was bawling so much that Jack wanted to know whether Nadya had ever been up to Vic Falls.

It’s difficult to know when the Stobarts will fully comprehend that they’ve left Zimbabwe for good. I imagine it’ll be different for all of them. Harry probably won’t even remember ever having lived there.

That was in February 2002, when things were looking pretty bad, as bad as they’d ever been some reckoned. The diesel queues were absurd, trucks, tractors, Datsuns and motorbikes spluttering snake-like from petrol stations nationwide, stumbling forward at snail’s pace, finally getting the pump nozzle into their fuel tank and watching as an unhappy attendant clicks the trigger off at the ration level his Boss had commanded earlier.

There was talk of whole towns in Matabeleland that hadn’t seen a drop of diesel since Christmas. And now word had it, petrol was for the high jump. “You need diesel to get petrol into the country”, a hotel owner explained to me. “There’s no diesel so soon there’s going to be no petrol”. The hotelier was distressed because he needed diesel to get his electricity generators working. He didn’t have any so his hotel was candle-lit by 6:00 every evening and he couldn’t offer his guests any food. If he had any guests, that was. International visitors quit coming to Zimbabwe ages back. Vic Falls was practically empty. 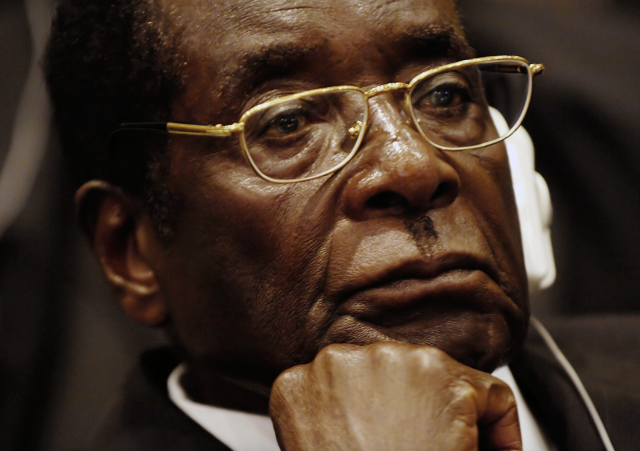 The one good thing about queuing for fuel, Bruce says, is you get to hear what everyone’s thinking. About Bob and his boys, the (then) 76-year-old President Robert Gabriel Mugabe and his Zanu-PF party who’ve been ruling the country ever since Bob Marley & the Wailers sang in the new state of Zimbabwe in Harare Stadium 20 years ago.

There seems to be a lot of harping back to the old days, not to the 15-year civil war that brought the country to its knees in the 1970s, but the invisible old days when Zimbabwe, or Rhodesia as it then was, counted itself among the most prosperous regions in Africa.

It’s difficult not to reminiscence and distort the past when you’re stuck in a queue, to think back to a time when a third of the country wasn’t HIV Positive, when 700 people didn’t die of AIDS related diseases every week, when the economy was so strong that two Zim dollars could buy you a US dollar.

So, another African country on the slide. Big deal. That’s Africa Babe.

But what if you live there and you’re white. More to the point, what if you’re family have lived there for the best part of 100 years, you’ve never lived anywhere else and suddenly it looks like you’re going to have to leave the place asap. That’s what the whites are worried about. 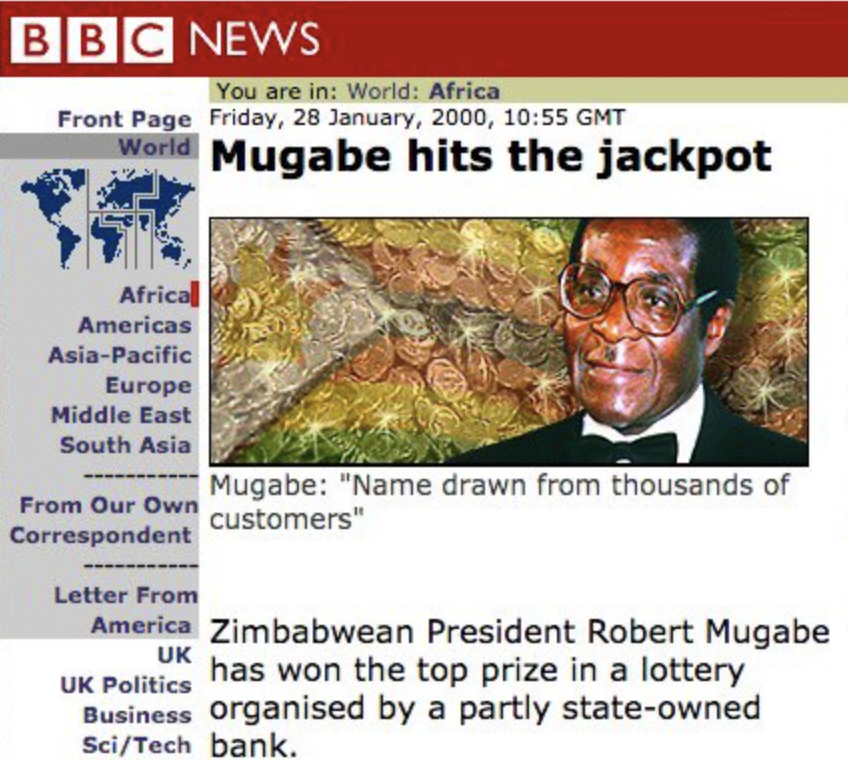 Diesel shortages, they could handle. Mugabe splashing out a million US every day to keep 11,000 soldiers fighting a mysterious war in the Congo basin, they could just about hack. Mugabe himself winning ZIM£100,000 in a national lottery was plain cheeky. The country going bankrupt, that was tougher. That meant people were getting desperate. Seven out of ten unemployed, crime on the rise, e-mails and CBs whirring though the humid skies, tales of isolated outbreaks. An 82-year-old cattle farmer, beaten up and hospitalized. His wife imprisoned in her own bathroom with barbed wire handcuffs. An Irish potter attacked in his bedroom, ribs smashed, car robbed, his teenage daughters hiding in a wardrobe. A Bulawayo white farmer with a bad temper smashes a black guy across the head with a wireless, kills him stone dead.

What was weird, Valentine’s Day 2000, sitting on the porch, fresh beers clinking against one another, cautious toasts to celebrate Mugabe’s defeat. Not like gone, finito, defeat. But he’d lost a referendum and that was big. He’d chanced his arm once too often and the people had snapped. Okay, so less than half the eligible 5 million voters had made it to the ballot box, but didn’t that say something. More than half had boycotted it altogether. 1.3 million voters said NO to Mugabe and that was history. And even if 45% of the people did vote YES to Bob’s proposal that he become that rarest of species, a constitutionally elected dictator, you could console yourself with things like the way the elections were rigged. Like how the State-controlled media accidentally omitted to print the names of all anti-Mugabe polling stations in their comprehensive list of “Where to Vote”, for instance. And then there was all those loyalty pay offs, the bails of mealie meal tumbling into rural villages, the Walt Disney exec-sized salary hikes for the civil service and party faithful, the national mint churning out the necessaries 24 hours a day.

More than that, Mugabe’s referendum promised land reform; the blacks of Zimbabwe would soon be reunited with the land “stolen” from them by white settlers in the wake of Cecil Rhodes colonial annexation just over a hundred years earlier. This was Bob’s trump card. Get rid of the white farmers and enjoy the spoils of victory.

A third of Zimbabwe’s productive soils are in the hands of just over 4,000 white commercial farmers. In a country of 14 million, that figure probably looks unreasonable and perhaps it is. Inherited wealth is always controversial. But the white farmers I spoke to are adamant the statistics are unfair, they don’t reflect the large amount of farmland that was fertile before black mismanagement rendered it overgrown, neglected, redundant.

“It’s not that blacks are bad farmers”, says Bruce who bought his farm eight years back. “Some of them are very good. The problem is most of them haven’t got the experience or training. They don’t know how to farm. They get given a farm and they think, right, how do I make money out of this? So they knock down the trees and they sell the wood. Then they’ve got soil erosion and they don’t know about fertilizer so their crops fail and they give up”.

Bruce’s attitude is straightforward: Buy a man a fish and he’ll eat it; teach him how to fish and he’ll never go hungry. He has forty Shona employed full-time on his farm, tilling maize, harvesting soya beans, planting paprika. Louise has 12 more working in a forge where they create exotic wrought iron birds, which are then exported around the world. They and their families are housed in a small village of two and three roomed bungalows built by the Stobarts when they first arrived. Every bungalow has a small allotment for vegetables; the village has a school, a medical centre, a church and electrification is near completion. Or was until rumours of an impending electricity crisis hit the headlines.

Mugabe’s referendum sought to have these farms confiscated and redistributed to the blacks. Perhaps Bruce would have survived the takeover because, unlike most whites, he’d actually purchased his property, with government approval to boot. Even so, he wasn’t banking on any favourable treatment.

When Mugabe lost the referendum, it gave white farmers a temporary breather. It seemed as though the people of Zimbabwe were in no rush to have farmland thrust upon them and, for this, beer bottles clinked. The clinking was premature, of course, but you have to be an optimist to live in Africa and so you clink whenever you can.

During March 2000, 700 white-owned farms in Zimbabwe were occupied by approximately 70,000 of the dominant Shona tribe of Zimbabwe, many of them armed with guns, spears and badzas. Essentially these men set up camp near the farmsteads and stayed put. Bruce and Louise’s farm was not spared although the forty or so blacks that set up camp became so bored they were gone again within three days. They were clearly awaiting further instructions before the final push. 700 white families blocked up the shutters and prepared for the worst. The international media, still trying to make sense of the horrors of the Mozambican floods across the Zimbabwean border, gradually began to home in.

After their farm was taken, Bruce and Louise emigrated to Hawke’s Bay, New Zealand, before starting anew in Vanuatu. My mother bought some pheasants from Louise’s Birdwood studio and I bought a pair of her storks for my friends, the Pringles. Robert Mugabe remained president of Zimbabwe until 2017. He died in 2019.

[i] When I initially published this story in the Irish Times, I gave Bruce’s surname as Fleming and Louise’s name as Lucy to muddle their identities somewhat. In hindsight, it wasn’t a very good cover! Given that Bruce and Louise’s property was taken from them anyway, I’ve used their real names here.