‘In this bright future, you can’t forget your past.’

My grandmother grew up at Corkagh House in present-day Corkagh Park outside Clondalkin, County Dublin. In 2017, I put together a history of this remarkable demesne for South Dublin County Council. Five years on, I have converted the book into a five-part podcast series.

The series follows the origins of the Corkagh area from the creation of the River Camac to the reign of William of Orange to the demolition of Corkagh House in 1960. It looks at the impact of the French Huguenots and the Gunpowder Mills at Corkagh, as well as the two principal families associated with the house, namely Finlay and Colley.

Produced by Mary Burke, the series marks a collaboration with South Dublin County Council and the Heritage Council, under the Heritage Stewardship Fund 2022.

“We have a history of this place dating back almost 700 years. The fact that Turtle has managed to condense that story into a podcast, and relays Corkagh’s often complicated history in such a comprehensive and entertaining way is a real testament to his skill as a historian and a storyteller.”
Cllr Brian Carey,  28 November 2022 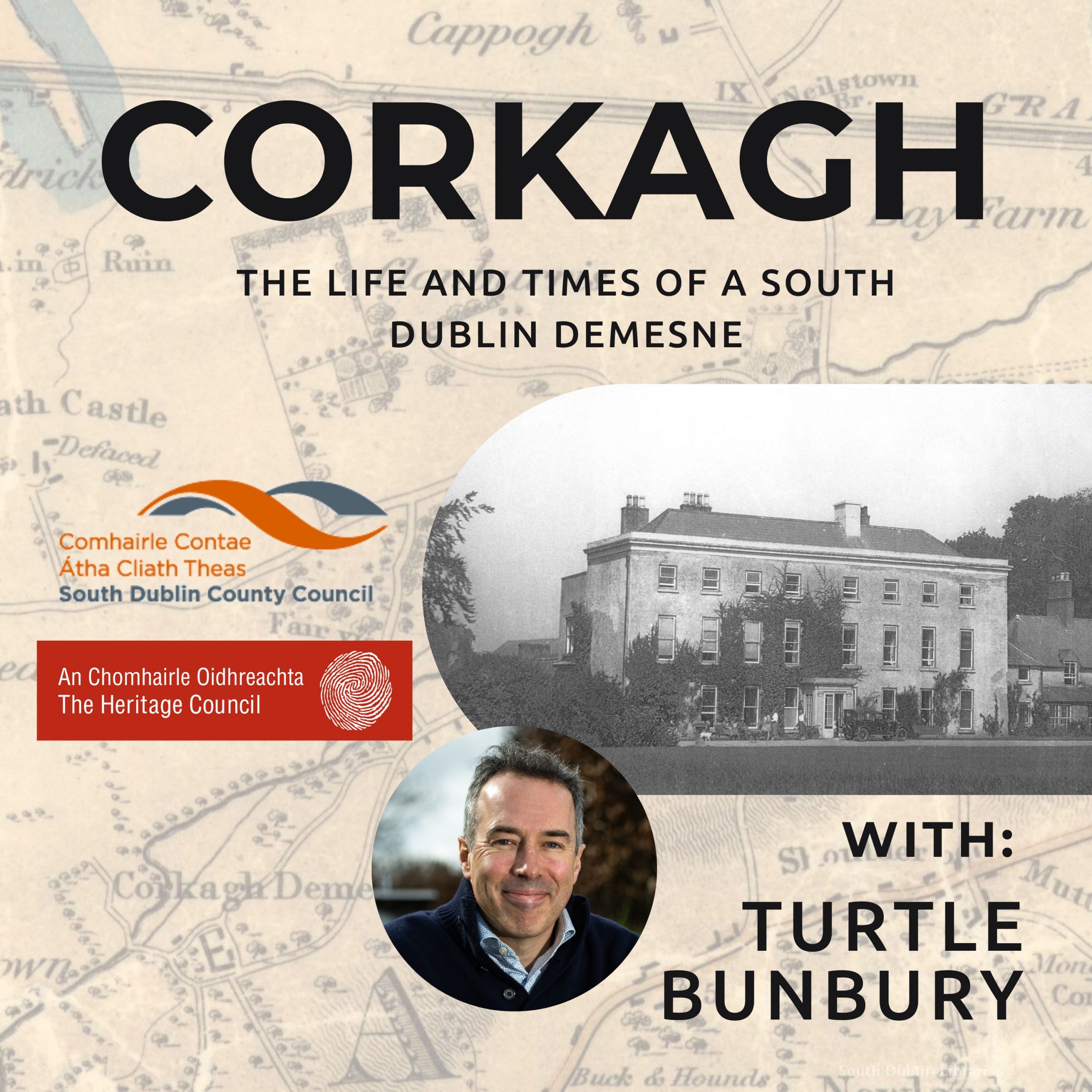 I’ve always been passionate about the subject of the Irish abroad, and the impact they have made on world history. As a travel writer, I always looked for Irish connections wherever I went. I was never disappointed.

In the first series of ‘Turtle Bunbury’s Global Irish’, I look at five  extraordinary Irish people who have found fame and infamy around the world in centuries past. The first episode zeroes in on the fabulously named Hercules Mulligan, the tailor who saved George Washington’s life, twice. The second is about the polar explorer Ernest Shackleton, while the third looks at an amazing woman from Cork who became something of an angel to the gold-miners and gun-slingers of the Wild West.

The series is a collaboration with The Irishman, a delicious malt whiskey from Walsh Whiskey.  It is produced by Liam Mulvaney (11 for 10 Productions), who also composed the theme music. 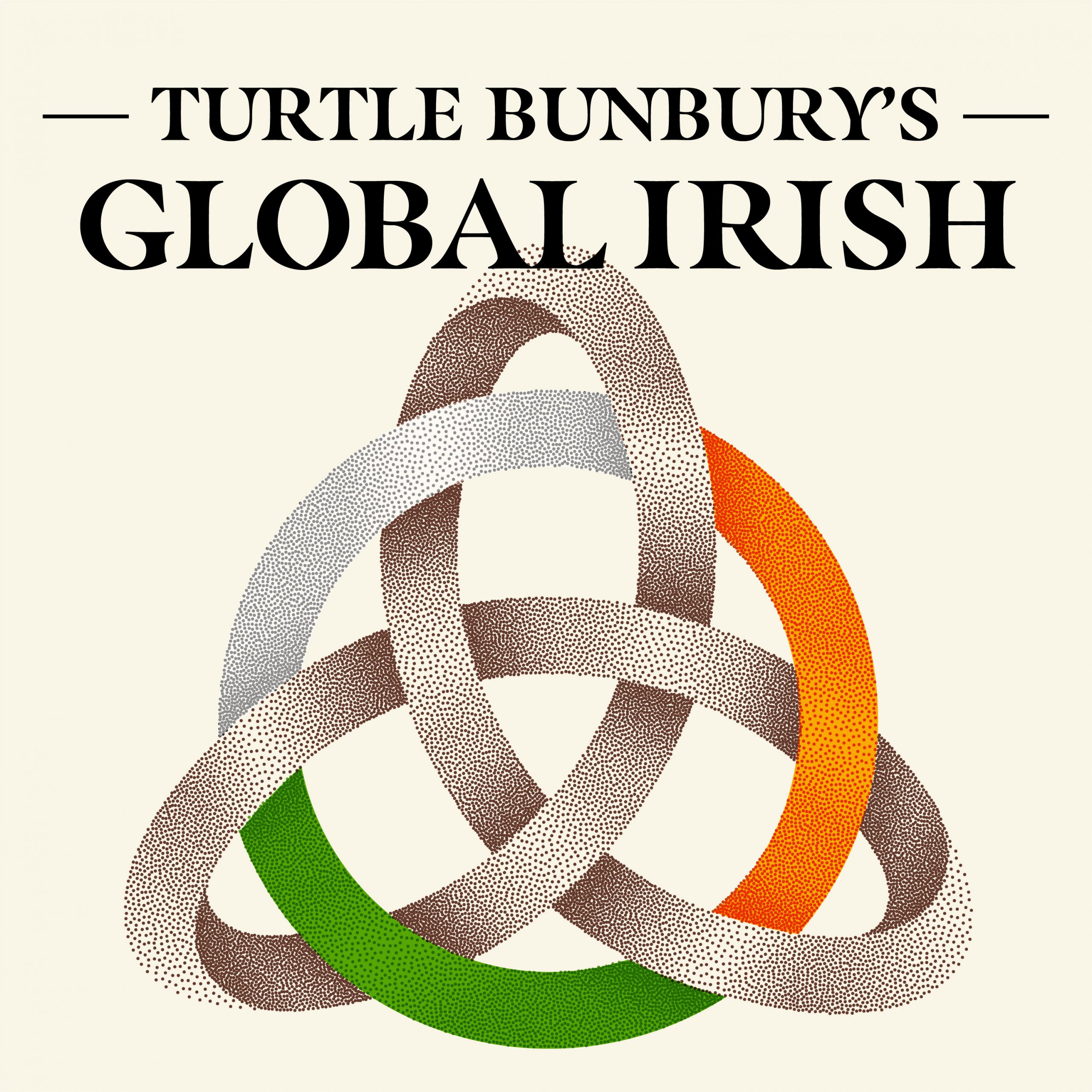 * Season 2 is presently in production.

On 21 February 2022, my 50th birthday, I launched  an 8-part podcast series, ‘Waterways Through Time’, in which I explore my beautiful Irish homeland through the history of its rivers, lakes and manmade canals.

Did you know that nearly ever river in Ireland is named for a goddess of the Tuatha de Danaan? Or that a ferocious sea monster used to lurk in the Shannon? Or that at least 51 monasteries were constructed on Ireland’s inland waterways? Not to mention over 2,000 crannogs.

Each episode is between 14 and 22 minutes long. In the first five, I look at the early history of the waterways, bringing it up to the eve of the Viking incursions. The last three are interviews with three charming people who work along the waterways in the present age, reflecting on their own family and personal connections.

A collaboration with Waterways Ireland, the series was produced by Ally Bunbury. Liam Mulvaney (11 for 10 Productions) oversaw technical production and composed the gorgeous music.

‘This was our first venture into podcasting and Turtle and his team created a fabulous series filled with compelling content and fabulous interviews.’
Nuala Reilly, Archivist, Waterways Ireland, 2022

A text version of the podcast can be found here. 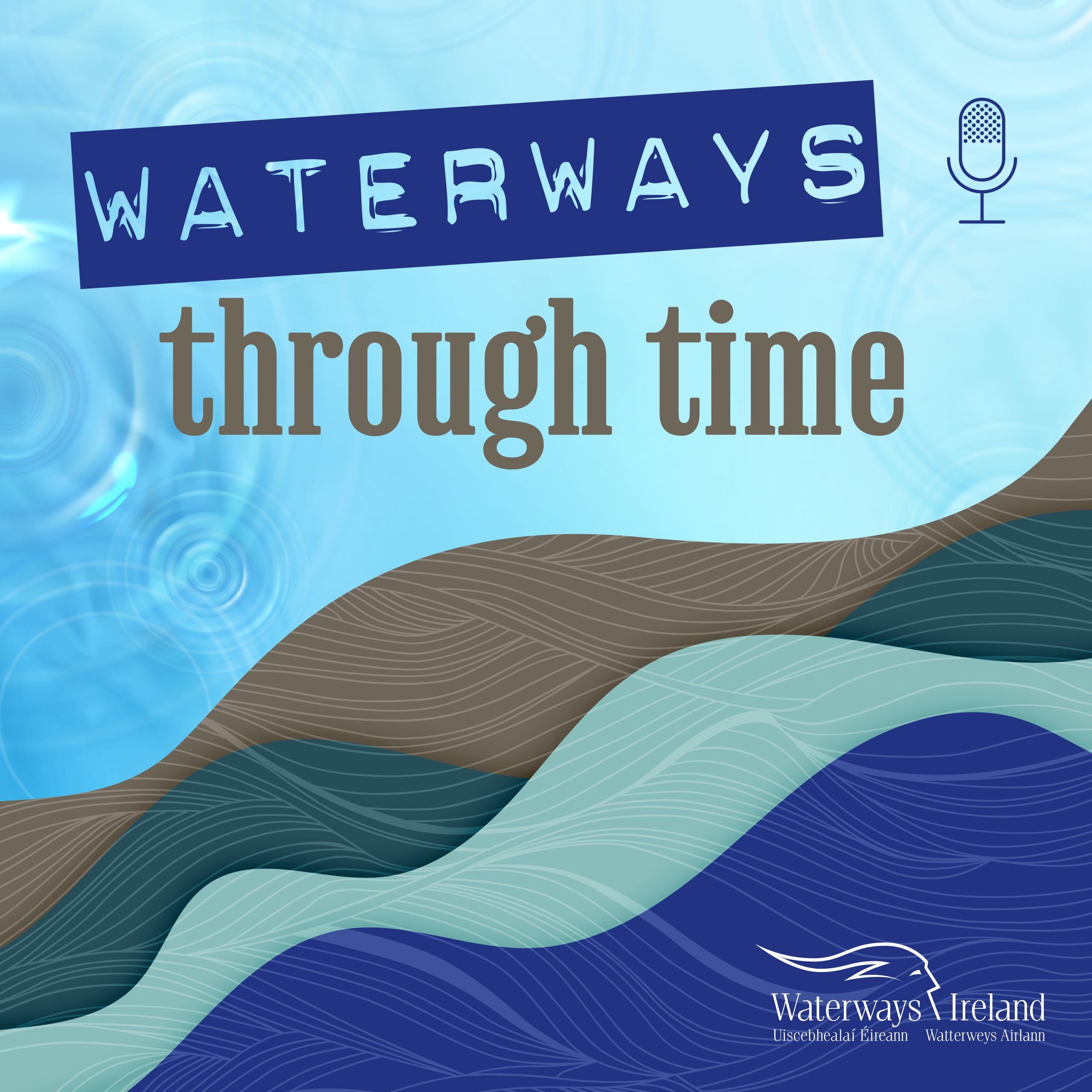 In 1920, William McMullan, an apprentice chemist, and his brother JG McMullan registered a new business in Dublin that sold and distributed lubricating oil and paraffin.  McMullan Brothers fortune was greatly boosted in 1921 when they became the sole distributor of a popular petrol called Mex Motor Spirit across the thirty-two counties on the eve of the partition of Ireland.

Known today as The Maxol Group, the family-owned business is now one of the biggest energy providers in Ireland, and a global leader in terms of food innovation and convenience retail on the forecourts.  Their ongoing success was exemplified when Maxol Ballycoolin in Dublin won the coveted NACS European Convenience Retailer of the Year Award in June 2022.

In this podcast series, commissioned by the company, Turtle charts a story of ingenuity, adversity and fortitude from the McMullan’s arrival into Ireland in the 17th century through the drama of global wars, oil crises, political conflict and economic hardship to the present-day challenged to climate change, Covid 19 and technological advance.

This series is based on the book ‘Maxol 1920–2020: Celebrating the First Hundred Years of an Irish Family Company’,  written by Turtle Bunbury. 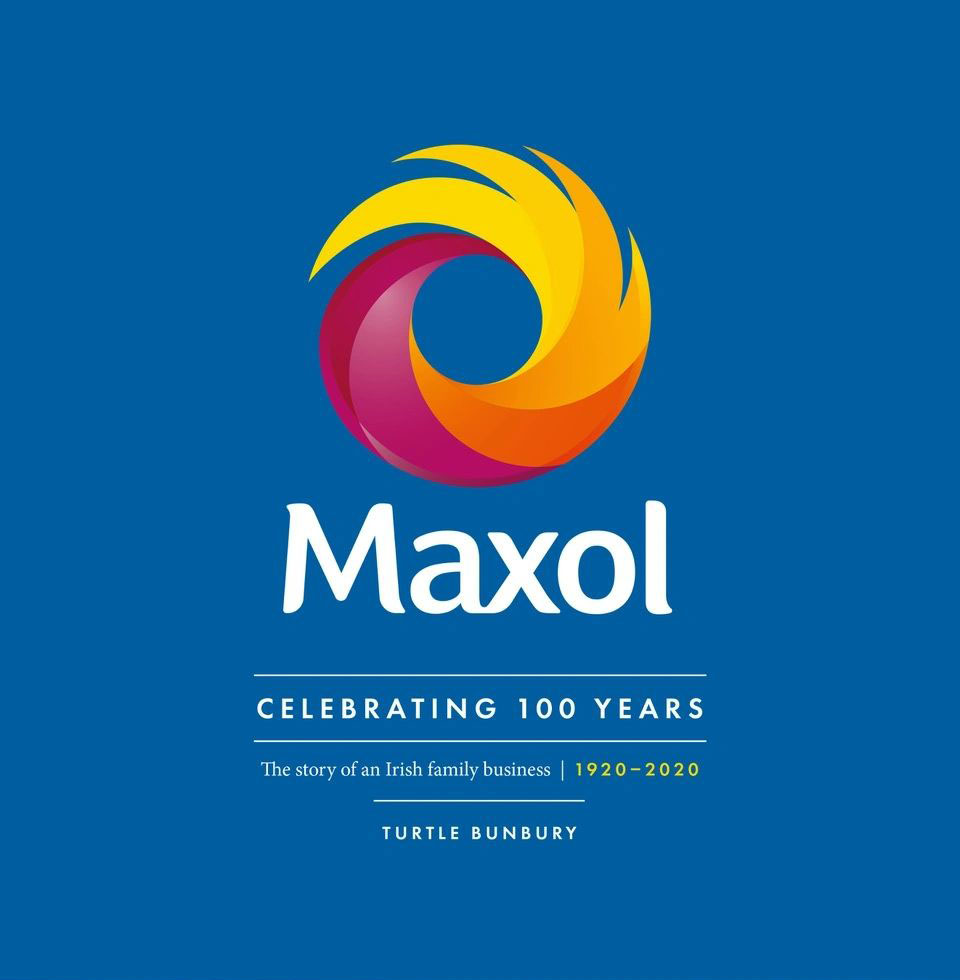 In each of the sixteen episode of Season One, I discuss life and its learnings with some of Ireland’s fine elders, recording their voices of courage, humour and wisdom for future generations.

The series received widespread support across the Irish media, as well as SuperValu and the iconic RTÉ news anchor Anne Doyle. 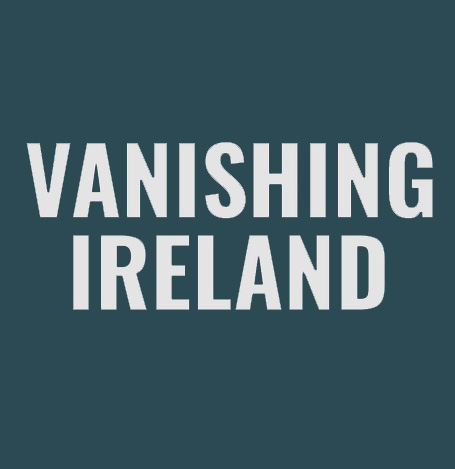 Turtle shares stories from ‘The Irish Diaspora: Tales of Emigration, Exile and Imperialism’, which charts Irish influence on global history, from Christian missionaries in medieval Europe to the Biden presidency.

‘This fascinating assortment of case histories, spread across 1,400 years and six continents, is an impressive feat of research. All of the chapters are based on a solid body of up-to-date historical writing. The summaries of often-complex historical background to the lives explored are models of lucid compression. The short biographies themselves are lively yet judicious, packed with vivid detail but willing, where necessary, to question or dismiss colourful legend. And the reader will come away with a new sense of the many ways in which Ireland has interacted with the world beyond its shores, and of some of the extraordinary careers that have resulted.’ 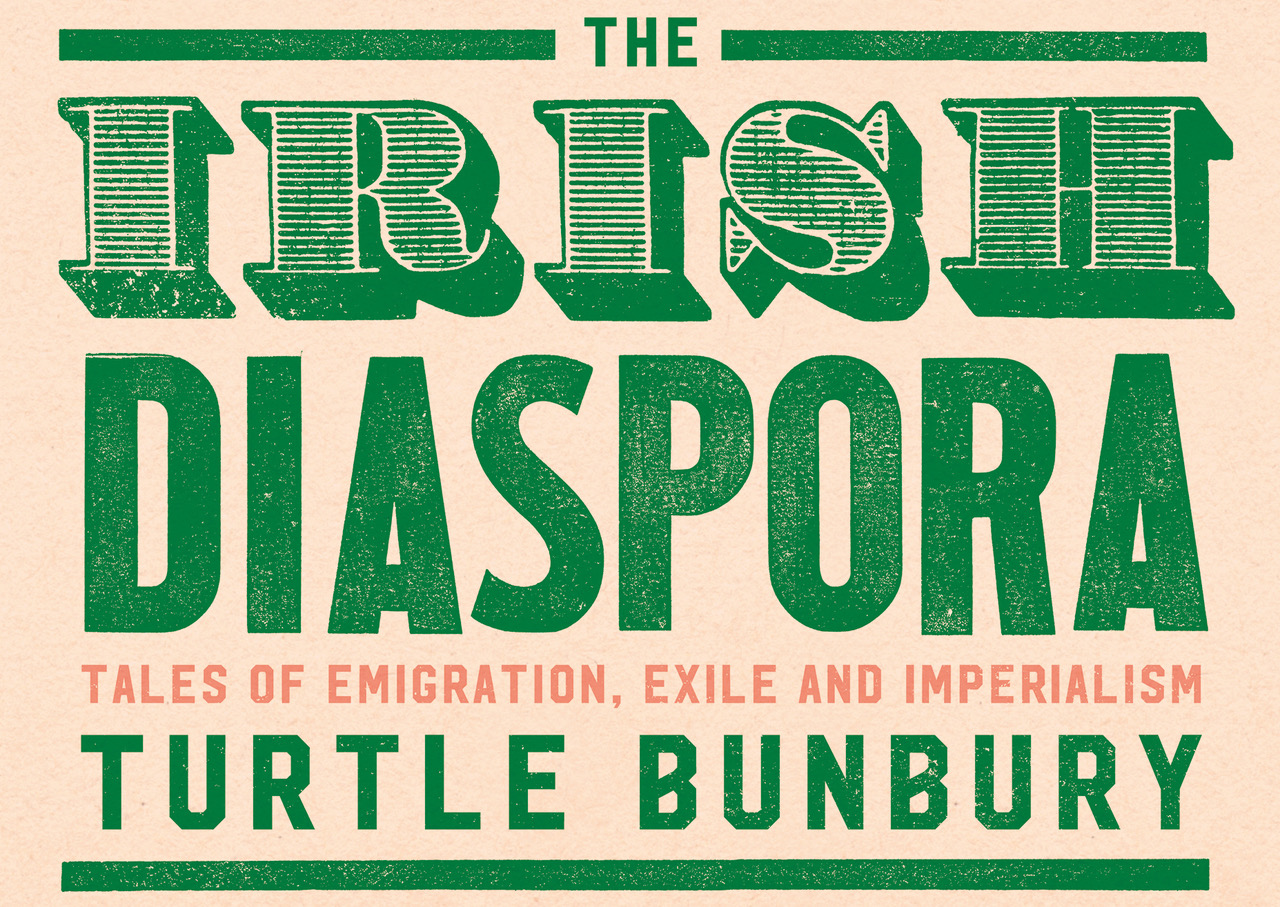 Turtle shares stories from his book ‘Ireland’s Forgotten Past‘ – a collection of overlooked and ‘disremembered’ moments in the history of Ireland, such as the Night of the Big Wind, Oliver Cromwell’s tailor, King Sitric of Dublin and the rise and fall of the Knights Templar.

‘Turtle Bunbury delivers a magnificently eclectic collection of 36 little histories of the “overlooked and disremembered” – objects and animals; people and places; and events, big and small … The sheer pleasure that Bunbury takes in spinning these tales would draw the acid from any pen … .a skilled storyteller who carries his learning lightly and his readers with him.’ 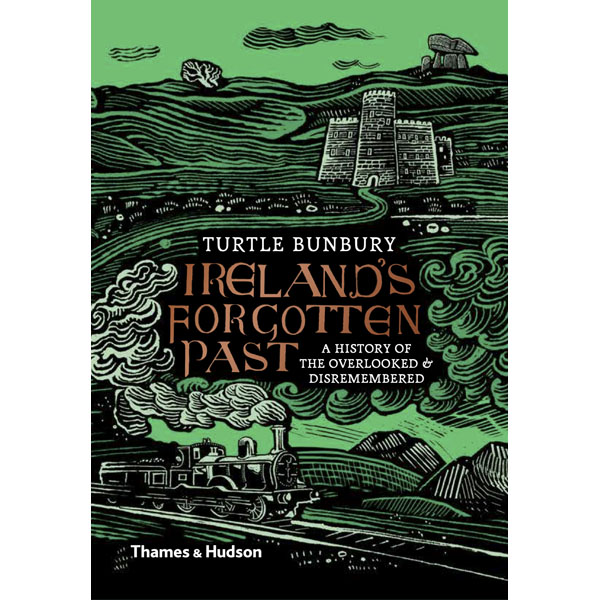 The Voice of Benevolence

In 1847, the Choctaw Nation sent $170 to Ireland to help alleviate the distress at the height of the potato blight. In this episode, Turtle teams up with Chief Gary Batton of the Choctaw Nation and the American history podcast BackStory to tell a remarkable tale from of hope and generosity from the Great Hunger. 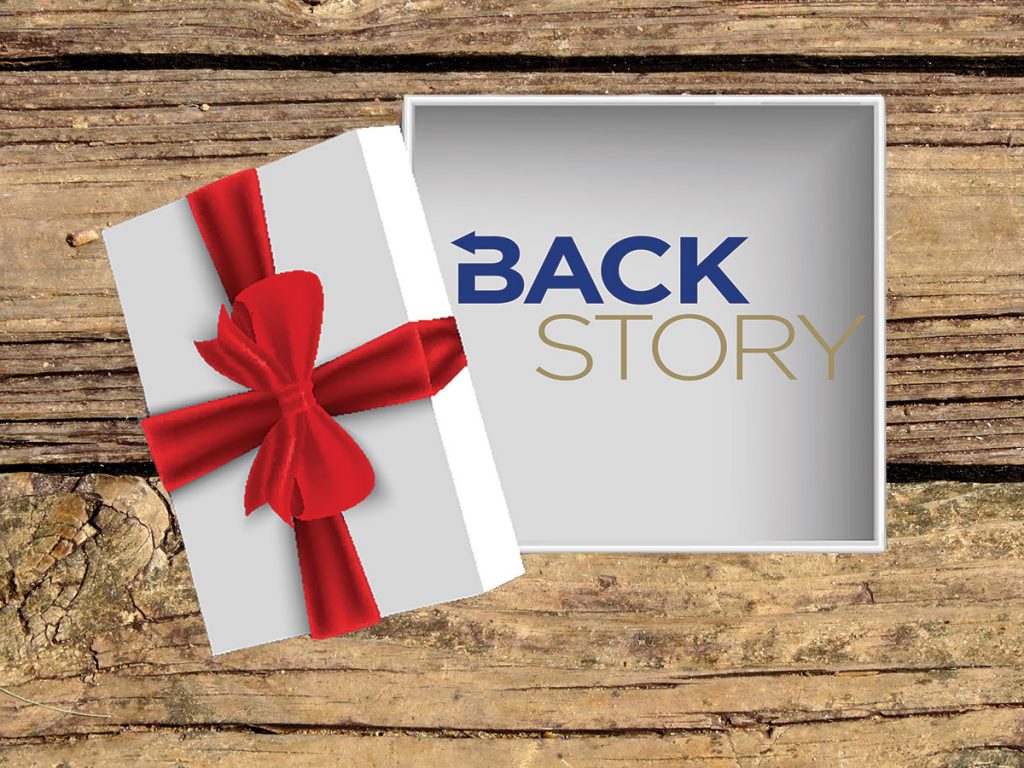