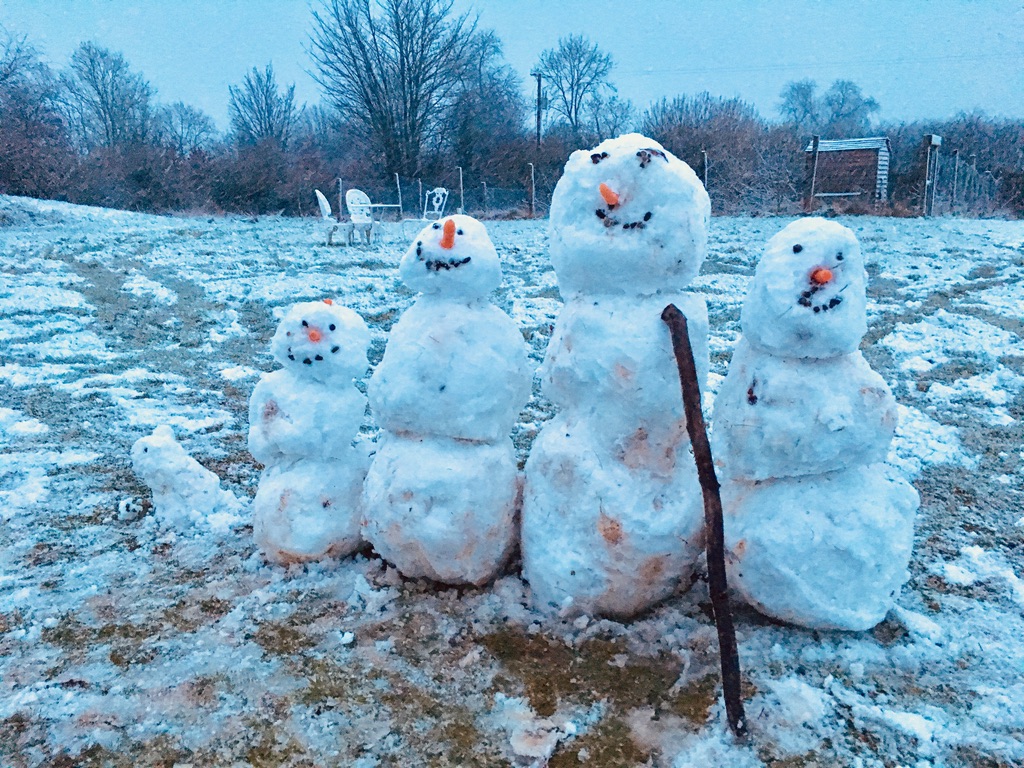 “The heavens scowled, the huskies howled and an ice wind began to blow” – The Cremation of Sam McGee, Robert Service.

I had never heard of the poet of the Yukon, Robert Service, until New Year’s Day in 1963. The narrator was my neighbour, Jim, and his muse was inspired by the harsh weather that was with us and about to engulf us.  We were on our way to attend and secure our sheep herd three miles away in the hill country.

Around Christmas Day 1962 the weather deteriorated. The winds shifted north with deep frosts through the evenings and through the nights. The same conditions prevailed post Christmas and on towards the new year and the knowing men, who had a nose for such things, predicted there would be heavy snow storms ahead.  They were correct because, as younger men, they had experience of the previous big snow in 1947.

By New Year’s Eve we knew that all hell was about to descend.  That evening my mate and I were in the local village as the Dublin bus reached its terminus.  Several passengers alighted including three Dublin girls who were members of the youth organisation An Oige.  In the local shop they purchased some small food item and then set out on foot to make the four mile journey up to their mountain hostel.  I studied their apparel and I thought that their footwear was not at all suited for the prevailing and upcoming conditions as they were wearing what my late mother would describe as ‘kacks or trigs of shoes’. But on they went. Youth must have its fling.

Some time, in the dark of night, the storm began to blow and by daylight on New Year’s Day 1963, the big snow was upon us.  My father suggested that I should go to the hillside and check on our flock.  Our neighbour, Jim, offered to come along.  I think that he saw the outing as a bit adventurous and we headed off on our mission.  On route we met the three youth hostelers headed towards the village.  One of them enquired “Mister, what time will the bus come ?”  My mate replied “ Well, it might make it by St. Patrick’s Day, about ten weeks away”.  His assessment was just about correct.  We moved on.   At this remove, I do hope that the girls got home safely.  Jim and I trudged on.  We checked on and secured our flock and then headed towards home.  The snow was now deeper but we mushed on, heads bent low as we confronted the storm.  Jim burst forth with more Robert Service:

”Lashed to his sleigh he raved all day
Of his home in Tennessee
And before night fall, a corpse was all
That was left of Sam Mc Gee.”

Later I learned that Service was known as the Kipling of the Yukon,  I marked it in red that I should find out about both Kipling and the Yukon, but later.  Right now the demands of this storm  consumed all our attention and energy.  Upon our arrival home we regaled all with our experience as we gratefully consumed mother Mary’s hot stew.

By next morning the storm had blown through and we had a whole new landscape, at first glance alluring.  The mountain scratch farmers knew that, as long as the wind remained in the north east, it would make for difficult farming conditions. The wind took squatter’s rights in the north east accompanied by intense frost. This frost caused the vast expanse of the Blessington Lakes to freeze over and, such was the  thickness of the ice, that you could drive a truck across it.  I heard of a few neighbours who did walk across its 200 yards neck in our neighbourhood and survived.

Our new world was alluring but the work of the small farmer had to continue.  Farm animals had to be attended to, and isolated neighbours had to be checked out.  A meitheal of locals assembled and, armed with spades and shovels, they marched like McAlpine fusiliers, to cut through the snow drifts and open up lanes and roads so the locals could go about their daily chores.  A local man died and all rallied round to make sure that he had a decent burial.  Daily the meitheal came to open up more remote lanes and roadways. Wicklow Co. Council quickly came on board and recruited all willing hands as snow cutters.  The pay was standard at nine pounds per week.  The new army, with their own nose bags, set about liberating their mountain neighbours.  Mountain people will always sniff the December air and make provision lest a New Year snow storm should arrive.  We found our mountain neighbours to be appreciative and generous.  Later, the Irish army came in to assist our local meitheal and they supplied us chaps with substantial sandwiches.  Some organisation arranged to have food parcels dropped locally and I  saw middle aged men risk heart attacks as they mushed quickly through the snow, not to retrieve the bacon and sausages, but to dive on the cigarettes and pipe tobacco.  Needs must.  Our state television was just one year in existence and, as soon as possible, the crews were out to record their stories and get their pictures.  I do not know if their recordings survived.

As a Mass server of yore I was aware that brides could, on the odd occasion, be somewhat late coming to the Church. The rural tradition was that brides came from their family home to their local Church for the ceremony.  Now, a bride of my acquaintance lived in the high country out towards the Sally Gap and, because of the storm, she became known as the bride who was twelve days late.  Her area was snow locked but Wicklow County Council rode to the rescue armed with heavy plant and cleared a path to the church.  One operator told me that such was the intensity of the frost they had to leave the bulldozer engines running all night because, at that time, diesel oil could freeze over.  Others who defied the difficult  conditions were ambulance crews and medical doctors.  All braved the elements to get the sick, the needy and the expectant mothers to hospitals. Due to safety concerns both the Wicklow and Sally Gaps were the last areas to be opened up.

A bonus from the big freeze up was that a ‘Fit Up’ travelling road show got locked in our village.  So we had repeat performances of Sweeney Todd,  the demon barber of Fleet Street.  The show people also introduced our village to the pastime called ‘bingo’.  Eventually, the mountain men sniffed what they described as a “thaw wind’ and conditions  began to ease as a weak sun heralded the onset of softer weather.  My bedroom was about 100 yards from the edge of the Poulaphouca reservoir and, as I lay in my bed, I could hear the ice beginning to crack and I was reminded of the  lines from the Ancient Mariner by the romantic poet S.T. Coleridge

The days brightened and got warmer.  The birds reclaimed the skies and, once again, the brooks began to babble.  The snow was slow to melt and in the mountains and in nooks and crevices it remained defiant late into the summer.  A harbinger of improved conditions was the return of the number 65 bus and indeed some members of An Oige who were anxious to confront the remnants of the snow storm in cold naked Glenbride.  Eventually life got back to near normality.

At that time the local Council harvested their own fuel supply at Crioc Ard up in the Wicklow Gap and so we snow cutters now became turf cutters.  On a Monday morning, armed now with turf sleans and spades, we set about demolishing turf banks.  The pay was still nine pounds per  week.  A cutter was expected to produce twenty five cubic yards per day.  To us hardy strong country lads that was no bother.  After the turf was footed we, the casuals, were laid off. That was the first of several dead end jobs that I had during 1963.  But all was not bad, because as the year got into its stride a neighbour had a decent win in the English Grand National. The winning horse was an outsider and came in at 66/1 and was ridden by a jockey from near Naas.  The neighbour had a ten bob note on the horse.  The winnings were very welcome,

Other memories that lit up our young lives were going to see the Miami show band and Dickie Rock.  Later on, the story of Christine Keeler, Lord Profumo and the English Conservative Party gave us  youths something to chew on.  So too, the arrival of Mary Quant with her  mini skirt. Surely the highlight of that summer was the arrival of USA President John Fitzgerald Kennedy to our shores.  Kilkenny won the All Ireland Hurling Championship and Galway left their shooting boots by the Corrib river and gifted the the the all Ireland Football Championship to Dublin.  Our club won the Co Wicklow Junior Football Championship, an honour for our little village and I bought my first copy of the Robert Service collection of poems called ‘Songs Of A Sourdough’.  What a delight.

While back in the summer, with pride and joy, we welcomed President Kennedy to our shores.  However, in November that same year, we mourned his death when he was assassinated in  Dallas, Texas on the 22/11/1963.  That was an awkward day for myself also because, on that Friday, I was laid off from the last of my 1963 mundane jobs.  Luckily, I had enough set aside to get me through the the festive season and, come January, it was a case of Ce Sera Sera. The year that had begun with prolonged snow and ice storms faded to an end. Back in the harsh month of January 1963 we lost a neighbour, but we got a new arrival and to that baby, who blew in with the storm, I wish you a happy big ‘O’ birthday.

P.S.  I am not a professional writer, this piece was not researched, it is just how I seem to  remember the year 1963 and its tough storm tossed  beginning.