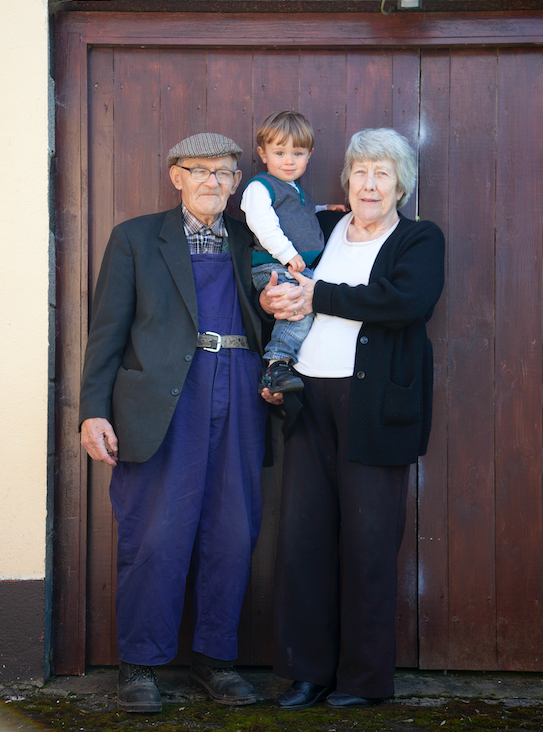 ‘The missus gets up at six in the morning,’ marvels Bill Martin.

‘I’m never in bed any later than that,’ agrees Birdie.

‘And I tell you, when she gets up, she opens this window and that window and every window in the house, so that you either get up or perish in the bed!’

‘And do you get up then, Daddy?’ asks Birdie in mock indignation. Bill is not her father – he is her husband and has been for the past forty-eight years – but she calls him Daddy all the same.

‘Well, to tell the truth, no,’ concedes Bill. ‘She’ll bring me down a warm cup of tea to the bed at eight o’clock in the morning.’

‘Seven. Seven. Seven.’ She says it three times, eyes raised, as if she has said it a million times.

‘Seven? Jayzus, does it be as early as that? I don’t be well awake at that hour, you know. My eyes would only be opening up.’

‘And I’m doing that for nearly half a century now,’ says she.

‘That’s the truth,’ he concludes.

Bill and Birdie are as charming a couple as you can meet. There is much laughter and camaraderie between them. Birdie is constantly flicking his ears and play-boxing him in the ribs. They still flirt and rile and tease and torment and love each other, just as they did back in the early 1960s when Bill first offered to walk her home from a dance in Crookstown.

‘He asked me after only one waltz,’ says Birdie, still bashful at his haste. ‘I didn’t know what I was getting into, mind! He was my first and only one.’

Bill was born in 1921 when Ireland was still part of the British Empire. Birdie Dempsey arrived a decade later. Both came from a farming background. The Martins have been in and around the Quaker village of Ballitore for innumerable generations. Bill’s grandfather drove dray-loads of straw north from Ballitore to the British cavalry horses stationed at the Curragh. One sad day, shortly before the First World War, he was tying a load of straw when a rope snapped and the straw came tumbling down upon him in such volume that he was crushed to death.

Ned Martin, Bill’s father, succeeded to the family home, a labourer’s cottage built by the Land Commission in 1912. He rented it for one or two shillings a week. The Land Commission also assigned Ned and three of his neighbours a quarter share each in a thirty-two-acre plot of land known as the Cow Park where their cattle would graze in a communal manner.

Ned worked as a ploughman for farmers in the area, such as the Fennells of Burtown House and the Butterfields of Ballitore. He married Anne Leigh and had three sons and a daughter.

‘I left school when I was twelve year old,’ says Bill, who was the youngest son. ‘And I started picking stones and potatoes for old Jim Fennell at Burtown. I knew him well. He had got an awful shock in the war. He and his wife, Cynthia, would come up every day on their two horses and ride around and see everything that was going on. I worked there eighteen years after that, pulling the horses and ploughing and tilling the land. There was twelve men at it full-time, with maybe fifteen or more when the crops would come on to be saved. All the people from Ballitore would come in, snagging turnips, snagging beet, picking potatoes. There were no eleven o’clock breaks in those times,’ says he, shaking his head at the very thought of the idea. ‘You’d get the work done. And you’d bring your lunch in with you. A bit of bread and butter – if you had butter.’

Cattle were his forte and he often herded them down the back roads to the fairs in Dunlavin and Baltinglass. ‘I remember the slaughter of the calves too, when there was no market for them. A man came around to shoot them all. You’d get seven and sixpence a time once you proved they were buried.’ 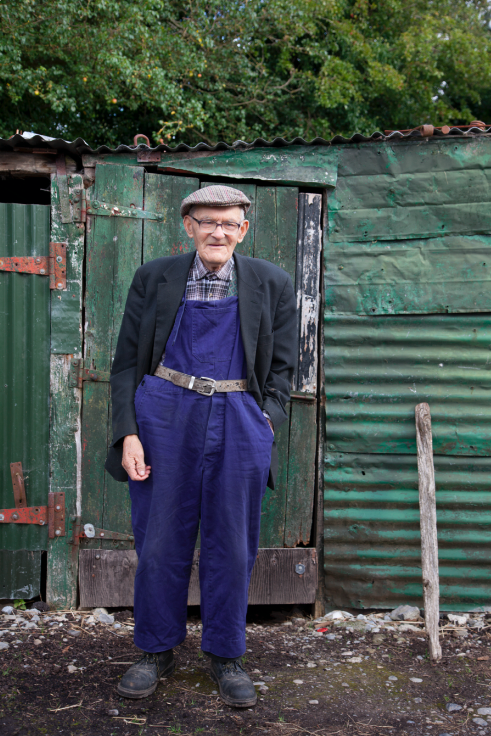 ‘There were six work and cart horses in Burtown one time, and a couple of hunters. Sometimes we’d be carrying big barrels – fourteen stone of barley, sixteen stone of wheat – out on a pony and dray to the threshing mill in Athgarvan. That journey would take you a whole day at that time.’

Perhaps the sweetest sound you could hear back then was the evening bell that rang out across the fields from Burtown at 6 p.m. to let everyone know the day’s work was done. ‘The bell was so high up that we could all hear it but, oh God yes, we would listen out for it all right.’

It wasn’t all farming though. Bill had a wandering disposition that took him to faraway Munster where he drove bulldozers around the Devil’s Bit and helped lay the runway along the bog that enabled Shannon airport to open for business in 1942. ‘A rolling stone gathers no moss,’ says he, ‘but I have travelled all over Ireland.’

He subsequently fine-tuned his zest for travel into a passion for horse-racing. ‘Don’t mention racing to me!’ he chuckles. ‘I was about eight year old when I went first to the Curragh, my first meeting, on a Saturday. And I have been there at nearly every meeting since. And I go to Galway, Gowran, Leopardstown, Punchestown, the lot. I know all those racing crowds. They were always very good to me, to tell you the truth.’

At one such meeting, a cameraman photographed him standing alongside Michael O’Leary, an immense supporter of Irish horse-racing. The Ryanair chief turned to Bill afterwards and said, ‘Come on and I’ll take you for a flight.’

On another occasion, Bill was ‘up in the Curragh’ watching the auld horses going around. ‘There was a smashing looking lady beside me. Very good looking and I was chatting her up. She didn’t know me, you know. Anyway, the horses were going down to the ring. And then this lad come over and took a snap of the two of us for a paper. And she says, “Jesus, Mary and Joseph, I’m a nurse and I’m supposed to be on sick leave – what will I do!?” She was nearly passing out …’

‘And he was ready to give her the kiss of life,’ interjects Birdie.

Bill and Birdie have three sons, Eddie, Declan and Bill, and five grandchildren, including a toddler called Ben whom they were looking after on the day we visited.

‘You’re a lad who can fight for what you want, ain’t you, Ben?’ says his grandfather, kicking a ball over at him. ‘And you only a babby.’

In later years, the Martins reared Charolais cattle which they exhibited at shows around the area, such as Tullow, Athy, Tinahely and Tullamore. Birdie shows us a photo of Muallaghmast Mabel, a Tullow Show award winner in 1996.

‘Ah, we’d wash her and get her ready, the two of us … ’ recalls Bill, trailing off as he feels Birdie looking at him. ‘Well, it was the missus …’

‘We showed her in three of four categories and she came second in them all,’ says Birdie factually. ‘So I said, “Let me wash that coat and I’ll bring her around for the last one.” I washed her down and we went into a class with twenty-five other cows, and we won. And I was always washing cattle after that. Sometimes I’d be up at four o’clock in the morning to wash a cow before the show.’

‘Mabel won first prizes all over the country, but she bred no calves’, says Bill, looking closely at the photograph. ‘But of course we Irish are great complainers.’

Birdie was born on 19 May 1931 and died on 9 May 2022. Bill was born on 25 September 1921 and died on 29 January 2019. Birdie will be buried alongside her husband in the cemetery by the Church of Saints Mary and Laurence, Crookstown, County Kildare.