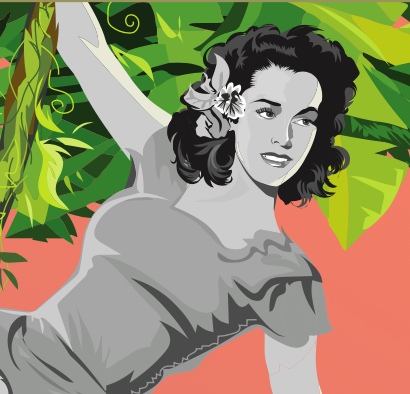 Maureen Sullivan of Boyle first starred as Jane in the 1932 Tarzan movie. From an illustration by Derry Dillon, extracted from Past Tracks (2021).

The stories of the Hollywood beauty who starred in the Tarzan movies, the scullery maid who became a baroness, a Great War air ace, the woman who composed India’s national anthem, a regiment known as the Devil’s Own and the inspiration for Chris O’Dowd’s ‘Moone Boy.’ Extracted from Past Tracks 2021, with Irish translations by Jack O’Driscoll.

ME JANE, YOU TARZAN

Boyle was the birthplace of Hollywood screen legend Maureen O’Sullivan, the daughter of an officer in the Connaught Rangers. In 1929, the 18-year-old sailed for America. She scored her breakthrough in 1932, starring as Jane in ‘Tarzan the Ape Man’, with Olympic swimming champion Johnny Weissmuller as the eponymous jungle hero. The film gave rise to a Metro-Goldwyn-Mayer franchise in which she reprised Jane’s role five more times. In 1986, she appeared in ‘Hannah and Her Sisters’, playing mother to her real-life daughter, Mia Farrow. Maureen died on 23 June 1998. Her grandson Ronan Farrow won the 2018 Pulitzer Prize for Public Service for helping to uncover allegations of sexual abuse against film producer Harvey Weinstein.

THE BARON AND THE MAID

Aristocratic society was stunned in the 1680s when John King, the son of a distinguished Cromwellian officer, fell in love with a “pretty and persistent” scullery maid. Peggy O’Cahan (aka Margaret Kane) was working at Rockingham (now Lough Key Forest Park), the King family home outside Boyle, when the future Baron Kingston first developed “a more than ordinary and suspicious familiarity” for her. By the time his elder brother, Robert, 2nd Baron Kingston, heard of the romance the “amour was well advanced” and the couple had married. The 3rd Baron’s uncle captured the essence of the King family reaction to the marriage in this eloquent statement:

“Few of the nobility of English extraction have ever contracted marriages with Irish papists but none (up to this case) have married one who was at once an ordinary Servant Maid and an Irish Papist Bitch who had neither Charms of Beauty nor genteel behaviour nor agreeableness of conversation”.

By the time he succeeded as 3rd Baron Kingston in 1693, John had converted to Catholicism (on the accession of James II) and married Peggy, who thus became a baroness. However, his earlier support of the doomed King James II against the victorious William III meant that he spent the next fifteen years defending his right to the title and estate in a bitter legal dispute with other family members. In 1708, he finally won outright ownership of both the Mitchelstown and Boyle estates on the promise that he would conform to Protestantism and raise his children in the Protestant faith.

Despite their early exposure to Catholicism, the children of John King and Peggy (née O’Cahan) do not appear to have been much influenced by that religion. Their son James King, 4th Baron Kingston, abandoned the Catholic faith on succeeding to the lands and estates in 1728, and served as Grand Master of the Freemasons of England the following year. In February 1731, he founded the first Irish lodge of the Freemasons at Mitchelstown. He also founded Kingston College in Mitchelstown as a refuge for elderly people of the Protestant faith who had fallen on hard times. In 1751 the 4th Baron married, Isabella, widow of the distinguished naval officer, Sir Chaloner Ogle, Admiral of the Fleet. His sister was Lady Sophia Desart.

Between 1793 and 1922, King House was the principal barracks and recruiting depot of the Connaught Rangers, a highly rated regiment of Irish infantry soldiers who fought in the British Army. Originally comprised of the 88th Regiment of Foot, their ferocious impact as shock-troops against Napoleon’s forces during the Peninsular War earned them the nickname ‘The Devil’s Own‘. (See here) 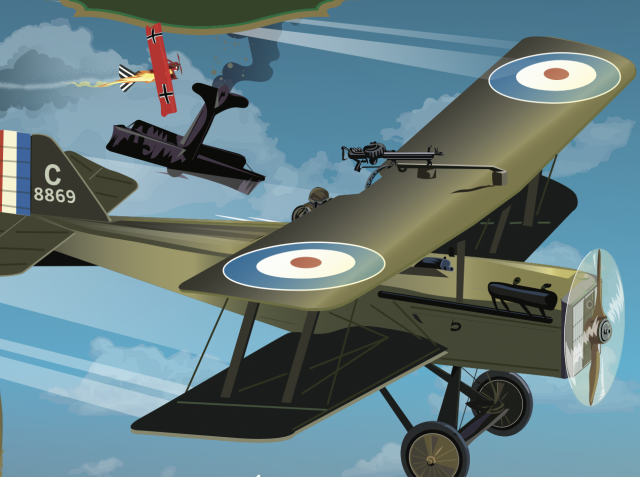 Close up of dog-fight by Derry Dillon, from the Boyle ‘Past Tracks’ panel.

George ‘McIrish’ McElroy was the third-highest-scoring air ace of all Irish or British pilots in World War One. McElroy, whose family farmed at Kiltycreighton, just outside Boyle, spent the first part of the war delivering messages on a motorbike along the Western Front.

Gassed at Ypres, he was back in Dublin when the Easter Rising broke out. Ordered to fire on his fellow Irishmen, he refused to do so, earning him a period of menial garrison duty. He then joined the Royal Flying Corps and quickly became the star of the mess as his multiple aerial victories put him on a par with the famous Red Baron. In July 1917, he was shot down and killed by an anti-aircraft gun near Lille.

Gretta Cousins, née Gillespie, was one of the best-known feminists, activists and theosophists of her generation. Born in Boyle in 1878, she made her mark as co-founder of the Irish Women’s Franchise League, demanding a right to vote for women. She later moved to India where she became a friend of Gandhi and campaigned for women’s education and an end to child marriage. She organised the All-Asian Women’s Conference in 1931. A musician of note, Gretta composed the original tune for Jana Gana Mana, India’s national anthem. She died in 1954.

Boyle was the setting for ‘Moone Boy’, a sitcom created, co-starring and co-written by local hero Chris O’Dowd. The series, which ran on the British channel Sky One for three seasons, was based on Chris’s memories of growing up in Boyle in the late 1980s and early 1990s. It won an International Emmy Award for Best Comedy, two IFTAs for Best Entertainment Programme, and the British Comedy Award for Best Sitcom. Chris came to international attention with his portrayal of Officer Nathan Rhodes in the 2011 comedy smash hit, ‘Bridesmaids.’

THE DRUID & THE LAKE

Lough Key is named for Cé, a druid of the Tuatha de Danann, who was wounded by a poisoned arrow during the annihilation of his people at the second battle of Moytura (NB: Magh Tuireadh in Irish). He ‘rushed in madness and red lunacy’ until he came upon a heap of stones on the plains and fell into a deep sleep. As he did so, the waters ‘burst forth around him’ and drowned the poor fellow. The 8.5km lake is home to over thirty wooded islands.

Founded by the MacDermots of Moylurg in 1148, Boyle Abbey was once the undisputed pace-setter for agricultural innovation in rural Connaught. The beautiful Romanesque church was one of 33 abbeys built by the Cistercian monks in Ireland during the medieval period. It doubled as a self-sufficient model farm, requiring diligent management, a knowledge of mixed farming and the creation of a skilled labour force made up of lay-brothers. The monks also pioneered courtyard farms and built kilns, mills, granges and eel weirs, as well as Boyle’s splendid five-arch Abbeytown bridge. In the summer of 2022, a deep stone-lined well with two tunnel exits was discovered at the rear of the Boyle Family Resource Centre on the town’s Military Road. It is thought to connect with a tunnel system that runs from the abbey to various locations around Boyle town, including Assylinn graveyard. The Annals of Boyle, composed by Premonstratensian monks from Holy Trinity Island in Loch Cé, offers a chronicle of medieval Ireland up to 1253.

THE BATTLE OF CURLEW PASS

In the summer of 1599, the O’Rourkes and McDermotts orchestrated a brilliant ambush in a mountain passage 5km north of Boyle. Over 200 English cavalry and infantry fell as the Irish clansmen let rip with muskets, arrows and javelins, well as pikes and axes. Among the dead was Sir Clifford Conyers, the English commander, whose severed head was sent to the O’Connors of Sligo, hitherto allies of the English, as a warning to surrender. Sir Clifford’s body was honourably buried on Trinity Island in Lough Key.

Bernardo O’Higgins, the Liberator of Chile, whose father Ambrose was born near Boyle.

THE VICEROY OF PERU

Ballynary, 14km north of Boyle, marks the likely birthplace in 1720 of Ambrose O’Higgins, the son of a Catholic landowner. When the family lost their lands due to the Penal Laws, Ambrose sailed for Cadiz in Spain to work as a merchant. He later moved to South America where he established the first reliable postal service across the Andes.  By 1796 he had been created Marquis of Osorno and was promoted to Viceroy of Peru, the second richest colony in the Spanish Empire. His son Bernardo was one of the founding fathers of Chile.

The Big Snow of 1947 was one of the most difficult winters in recorded Irish history. At its peak, Boyle’s quick-thinking bakers and milkmen constructed horse-drawn sleighs, using ropes and barn doors taken off their hinges, in order to supply their snow-besieged customers with bread and milk.

Catherine Carty, mother of Billy the Kid, may have been from Boyle. A boyhood friend of Billy later described her as a ‘jolly Irish lady, full of fun and mischief’.

AN BARÚN AGUS AN CAILÍN TÍ