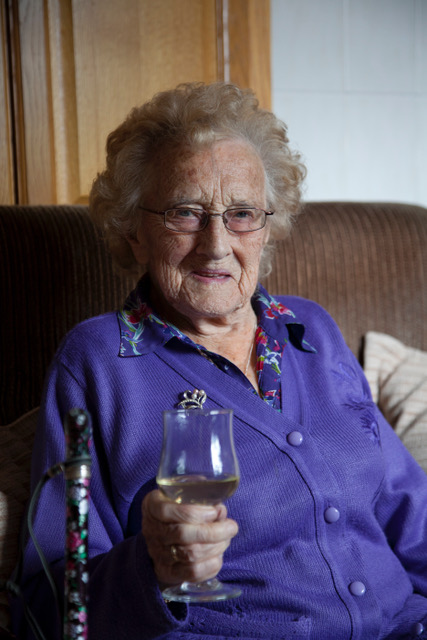 Catherine’s Cross is where it all happened. ‘That said,’ counsels Terry Lawler, ‘Mammy is the only one I ever heard calling it Catherine’s Cross.’ Bridget Aspell, her 102-year-old mother, explains that the crossroads was named for a woman called Catherine who lived in the house beside it.

Bridget used to visit Catherine’s Cross nearly every weekend back when the world was eighty years younger than it is today. Down by the cross, she would find the familiar faces, all gathered for the dance.

The idea of a crossroads dance sounds like make-believe to our twenty-first century ears, but Bridget remembers those halcyon evenings with absolute certainty.

‘There were dances all over Ireland at that time,’ she says. ‘There was another near us at Halverstown Cross, but we always went to the one at Catherine’s Cross. All my uncles played accordion and sometimes they’d be out there too.’

Bridget’s uncles were the Cummins brothers – Brian, Paddy, Myles and Bill. All four worked as labourers on the short-grass farms of County Kildare, although Myles, for one, served his time during the War of Independence. ‘He was given medals by the IRA,’ she says. ‘That was years ago, when being in the IRA was a badge of honour.’

Along with Bridget’s mother, Margaret, the Cummins boys were the children of Jim and Mary Cummins of Yellowbog, near Kilcullen, County Kildare. The house where they were raised stood just off the old Carlow road, close to both Catherine’s Cross and a pub called Brennan’s which still runs today.

Born in Naas in 1890, Margaret had found work as a housemaid with one of the gentry families of Kildare during her mid-teens. In 1910, she gave birth to a daughter, Bridget. The father’s name is unknown. This was dangerous terrain for many woman of that era who, for the sin of motherhood, all too often found themselves virtually imprisoned in a workhouse or a Magdalen Laundry.

Fortunately, Margaret’s mother offered to raise the baby while the younger woman continued to work as a house servant.

Until she was ten years old, Bridget’s grandmother was the most important woman in her life. ‘My granny could do everything,’ she marvels. ‘She knitted and sewed; she was great at embroidery. She made it all with her hands. I remember the collars she made for the gentry. Sometimes, she would call at their houses with the collars and sell them. But sewing wasn’t a skill I inherited. It’s the last thing I can do!’

On the eve of the First World War, Bridget’s mother married Peter McGlynn and settled at Twomilehouse, south of Naas. The McGlynns had seven children whom Bridget absolutely regards as her siblings – Peter, Billy, Rita, Jimmy, Mary, Mags and Lizzy. The latter two died as infants while the rest have all since passed on, bar the youngest sister Mary.

Following the death of Bridget’s grandmother in 1920, her mother’s sister Maryanne took on the role of rearing the young girl.

‘They were tough times,’ recalls Bridget. ‘Things were very scarce. Maryanne would go to early mass and when she came home, her neighbour would borrow her coat and shoes to go to the next mass.’ Many decades later, Maryanne would come to live with Bridget for the last seven years of her life, dying at the age of ninety-seven.

Bridget maintains that her childhood at Yellowbog was a happy one, even if there were not many others living in the area. In the wintertime, they would gather to watch the hounds and horsemen of the Kildare Hunt set off through the gorse and marshlands in pursuit of the fox.

During term time, she would meet up with the Dixon girls, good friends who lived nearby, and they would all walk the three miles from Yellowbog to their school in Kilcullen. This coincided with the War of Independence and Bridget recalls a morning when the notorious Black and Tans drove into the town. ‘We all ran down from the school to the square to see them with their guns. That’s the first time I seen the Tans.’

Fortunately, while a number of houses were burned during the ensuing conflict, the Cummins home escaped unscathed.

From school, she went to work at Orford’s pub in Kilcullen, now known as The Spout, and located just beside The Hideout. Her role was to keep the shop swept and polished before, during and after it opened for business. However, she was much happier when the Orford’s, or the Brophy’s, a farming family she also worked with, gave her jobs to do outside.

‘I worked in fields all my life. I loved the outside work – picking potatoes, thinning and snagging turnips. You’d pull them out of the ground, snag the top off and lay them all in a row on the ground. Ah, they were different times to now. People were much more homely then. If you wanted anything on the run, people would give it to you. But then people got more uppity and they don’t like to depend on other people. They want to be independent, I suppose.’

One Saturday evening, Bridget was making her way out of the chapel when a man at the corner stood out from the wall and started talking to her. ‘And that’s how I met my husband,’ she laughs.

Paddy Aspell had been working as a gardener at Knocknagarm on the edge of the Curragh since he was fourteen. After twenty-three years there, he was to spend over forty years as gardener for the jockey T.P. Byrne in Lumville.

The Aspells lived in Sunnyhill, two miles out of Kilcullen, where they raised eleven children, one of whom died young. Ever the land girl, Bridget frequently walked across the fields from Sunnyhill to Calverstown, to pick potatoes for the O’Connors of The Orchard. ‘And then I’d go home and get the dinner for the rest of them,’ says she with a wry smile. ‘I done two days work in one.’

Paddy and Bridget enjoyed sixty-two years of marriage before a lifetime of chain-smoking got the better of him in 1991.

Bridget now lives with a daughter on the edge of Kilcullen, surrounded by her family. On the kitchen dresser of her present home stands a fine photograph of herself at Burtown Gardens near Athy in the summer of 2012. She is seated on an elaborate swing designed by Sasha Sykes beneath the caption ‘Definitely the Oldest Swinger in Town’.

She enjoys life with the aid of a midday whiskey and a weekly trip to have her hair done by her granddaughter, Hazel Lawler, in Narraghmore. A great-niece, Josephine Archbold, brings communion up to her every week. Bridget graced the front page of the Leinster Leader when she did the honours as Grand Marshall of the 2013 St Patrick’s Day Parade in Kilcullen.

She also still enjoys her musical outings. ‘I love music,’ she says. ‘It’s the céilí for me. I am sorry I didn’t learn to play an instrument. My granny was a good singer. She used to sing ballads and old-time songs at weddings. But I don’t sing myself. If I started, everyone would leave the place. But I could stay up all night listening to it.’