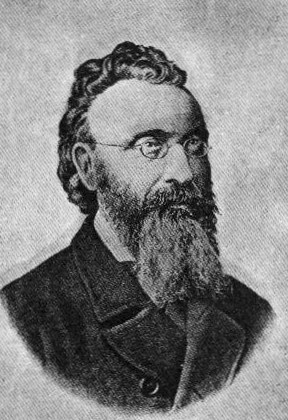 “Times are changed. The people are now comparatively educated, and demand the right possessed by the people of other Catholic countries of acting according to the dictates of their own judgement in all worldly concerns” – Charles J. Kickham, “No Priests in Politics“, 1863.

The son of a prosperous Tipperary shopkeeper, this celebrated 19th century novelist and Fenian pioneer was born at his mother’s family home in Mocklershill outside Cashel. The family later moved to Fethard Street in  Mullinahone, where he is today recalled by a plaque outside his home and a Celtic cross above his grave in the Catholic Church. In 1841 a keg of gunpowder accidentally exploded seriously rupturing the 13 year old boy’s hearing and damaging his eyesight. Left with just the three senses to work with, he abandoned his ambitions to enter the medical world and turned his talent to writing novels and ballads, based aound the rural community in which he had grown up.

Charles Josepk Kickham was a revolutionary soul and, in the autumn of 1865, he earned himself a 14 year prison sentence in London’s Pentonville. His crime? Over-enthusiastic association with the nationalist movement then blowing ill-winds across the country.

A Young Irelander from an early age, Kickham founded the pro-independence Confederate Club in Mullinahone during the Great Famine of the 1840s. His physical disabilities prevented him from taking part in William Smith O’Brien’s abortive rising of 1848, but he became an instrumental player in the Tenant League of the 1850s and, by 1860, was toasting glasses by smoky firesides with the highbrow elite of the fledgling underground oath-bound Irish Republican Brotherhood, forerunners of the Irish Republican Army. Kickham finished up as President of the IRB’s Supreme Council so his attitude is worth noting.

He’d had a pretty tough time, walking around Famine torn Ireland during his teens, unable to see properly and saying “What?” whenever anybody spoke to him. After the Famine and the Young Ireland Rising of ’48, Ireland entered a new era of uncertainty. The Anglo-Irish landowners were nervous; their paternalist system was collapsing. Gone were the days when you could keep the serfs chirpy by sending them off to the fields with a scythe and a pitchfork. Ireland was in a sickly state and the easiest thing to do was abandon ship, move back to the “Mainland” and leave the running of the estates to local Irishmen, generally unscrupulous scallywags who’d made themselves a tidy fortune out of the devastation of the 1840s. It was these agents whom Kickham and his followers couldn’t hack. Catholic or Protestant, these were the most tainted of all, traitors to Ireland, slaves to Capitalism, scourge of the countryside.

In November 1863, the Fenian leader James Stephens hired Kickham and a young Trinity College graduate, Tom Luby, to write for his nationalist newspaper, The Irish People. The two men were given the formidable task of defending the concepts of Fenianism in an age when everyone from the Catholic Church down was slating them as an unruly gang of firebrand militants.

Kickham managed to produce a number of excellent articles over the next two years, denouncing the role of the Church in politics, before his inevitable arrest and 14 year prison sentence in 1865. Stephens and his fellow Fenians had been organising an insurrection against the English for several months and the British Government knew all about it. The idea was to get heaps of American lolly along with an army of Civil War veterans and give the Brits a hammering. The Fenian Rising of 1867 was a short-lived affair, lacking sufficient American sponsorship or leadership to succeed. Kickham missed it all, but he must have drawn some comfort from the new direction of William Gladstone, Britain’s Liberal Prime Minister, who began advocating Home Rule for Ireland after the Rising’s collapse.

The 40 year old Mullinahone man was sick as a dog and almost totally blind by the time he was released, after 4 years, in 1869. He immediately published a novel called Sally Canavagh, written in prison. He also took time to teach his young nieces Josie and Annie Cleary the art of “finger talking”, as sign language was called, which he had learned in gaol.

10 years later, he published his most successful book to date, Knockagow, or The Homes of Tipperary, in print ever since, a memorable portrayal of a benevolent, if occasionally violent, society in pre-Famine Ireland destroyed by the rise of a slimy, money-grubbing new class of shopkeepers and land agents. The concept is similar to the flurry of post-Civil War novels in America portraying the lazy days of the Southern Plantations as a time of innocence.

By 1879, when newspaper headlines spoke of Irish Land Wars and the shock defeat of the English army by the Zulus in Southern Africa, Kickham had become President of the IRB’s Supreme Council. He was an old boy by now, old school conservative, powerful enough to turn down an offer of alliance with Davitt’s Land League, reckoning the IRB had no business dealing with land reform. The aged novelist symbolically removed his ear trumpet whenever anyone started talking to him about parliamentary politics or land reform.

Charles Joseph Kickham died in Blackrock, County Dublin, on 21st August 1882 and was buried in Mullinahone. The Kickham Monument opposite the Allied Irish Bank in Tipperary Town was erected in his memory. This bronze, seated figure on a limestone base is inscribed with the words: “Charles Kickham, poet, novelist and, above all, patriot”. 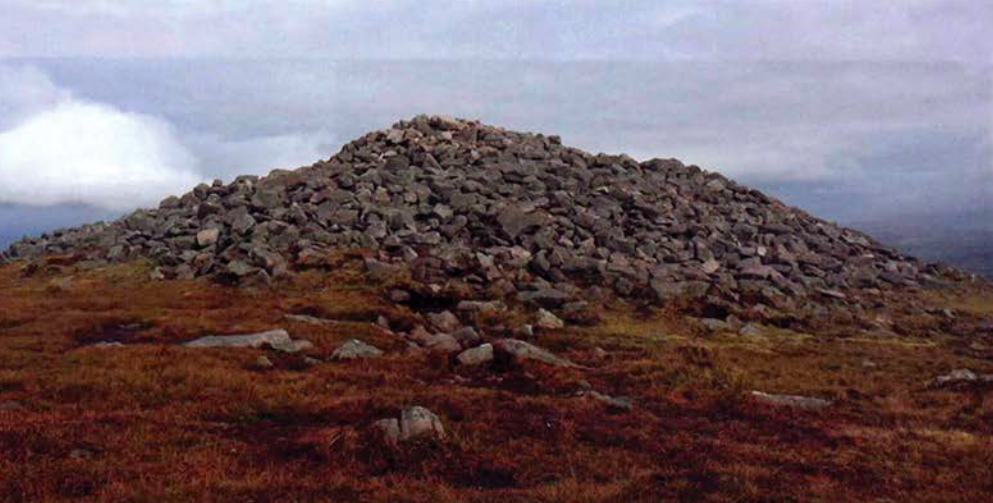 Alone, all alone, by the wave-washed strand
All alone in the crowded hall,
The hall it is gay and the waves they are grand
But my heart is not there at all,
It flies far away,
By night and by day
To the times and the joys that are gone
But I never can forget
The sweet maiden I met
In the valley of Slievenamon.

It was not the grace of her queenly air
Nor the cheeks of the roses glow
Her soft dark eyes or her curly hair,
Nor was it her lily white brow,
‘Twas the soul of truth
And of melting ruth,
And a smile like the summer’s day,
That stole my heart away
On that bright summer’s day
In the valley of sweet Slievenamon.

In the festive hall and the wave-washed shore
My restless spirit cries –
“My land, oh my land, shall I never see you more,
My country will you never uprise.”
By night and by day I will ever, ever pray,
As darkly my life it rolls on,
To see our flag unrolled
And my true love unfold
In the valley near Slievenamon. 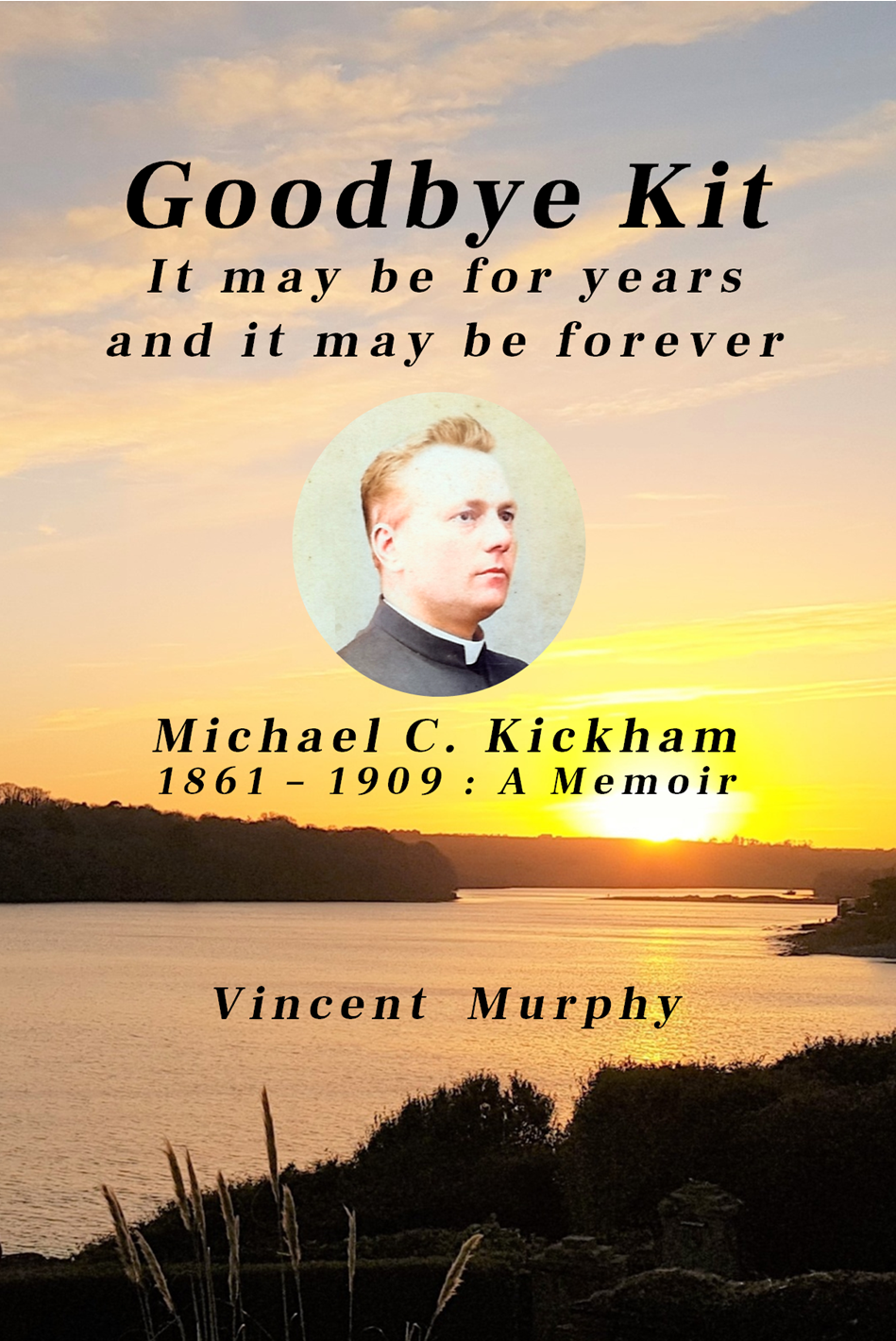 “Goodbye Kit. It may be for years and it may be forever” by Vincent Murphy tells the story of Michael C. Kickham. It is available here.

Michael Kickham, a second (or possibly third)  cousin of Charles, was born in Mullinahone in 1861 and educated at Mount Melleray, All Hallows and Angers in France. Charles’ unmarried brother Tom ‘Dovey’ Kickham lived with Michael’s family for a time, while two of Charles’ nieces, Josie and Annie Cleary, were his playmates in early childhood.

Ordained in 1884 for the New Zealand mission, Michael found himself in a diocese run by the Marist Order, who considered secular priests mere assistants to help in the diocese. This attitude resulted in Michael and 17 others sending a petition to Pope Leo XIII in 1888, complaining about the treatment of secular priests. Also at the St Patrick’s Day celebration in 1888 he incurred the wrath of the Bishop for  naming the Fenians, an organisation condemned by the Church.

Michael then applied to the Jesuits in Melbourne, was accepted and got permission from the Bishop to go on the proviso that if he didn’t stick it out, he would return to Christchurch. He lasted a mere 3 months in 1889 but refused to return to NZ. There followed acrimonious correspondence between Michael and the Bishop, culminating in the Bishop writing to Cardinal Moran in Sydney. The Cardinal sided with Michael and he got to stay in Australia.

In 1899 Michael returned to Ireland, didn’t attach himself to a diocese, and in 1901 he headed off without saying where he was going. In 1907 the family discovered by chance that he was in Buenos Aires, no longer a priest. He died there in 1909.

For more, see “Goodbye Kit It may be for years and it may be forever” , published by his grand-nephew Vincent Murphy.