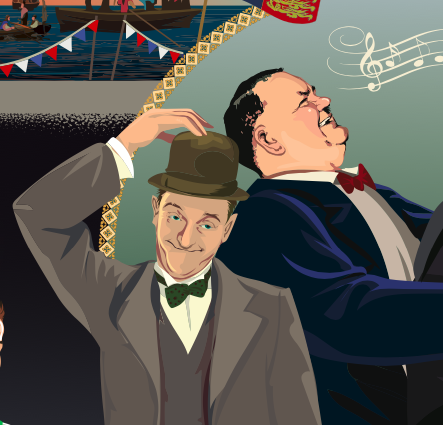 Laurel and Hardy in Cobh. Illustration by Derry Dillon.

A mercy mission from Boston, the bells that rang out for Laurel and Hardy, Sonia O’Sullivan and a remarkable Titanic survivor are among the cast on Turtle’s panel in Cobh railway station, illustrated by Derry Dillon, translated by Jack O Driscoll.

THE OPIUM KING & THE APOSTLE

In 1847, the USS Jamestown pulled into Cork Harbour with 800 tons of food and clothing. The supplies had been donated by citizens across the USA eager to help relieve the hunger, disease and death that was devastating Ireland during the Great Hunger. The warship was skippered by Black Ben Forbes, a Boston merchant who had made his fortune as an opium trader. Forbes went on a nine-day tour of County Cork. His unlikely guide was Father Theobald Mathew, the ‘Apostle of Temperance’. This was the remarkable Capuchin friar who had somehow persuaded half the adult population of Ireland to give up alcohol by 1845.  Fr Mathew died at 18 West Beach on the Cobh waterfront in 1856.

In 1969, Cobh-born Mary Shealy married John O’Sullivan, a Dublin-born naval officer who played goalkeeper for the Cobh Ramblers, having initially hurled with Brian Dillons GAA club. Sonia, their eldest child, loved running to and from St Mary’s National School, a kilometre away, especially at lunchtime with no schoolbag to carry. She enjoyed it so much that she joined the Ballymore-Cobh Athletics Club and began to train. Sonia O’Sullivan went on to be the greatest female athlete in Irish history, winning Silver in the 5000 metres at the 2000 Sydney Olympics, and becoming a 3-time World Champion and the world record holder over 2000 metres. She was renowned for her dramatic kick in the final stretch, a trick she learned when she left home for school at the last minute and needed to hurry up.

Stan Laurel and Oliver Hardy were one of the best-known comedy duos in cinematic history, starring in 107 films together. In 1953, the slapstick stars sailed from New York to begin one last tour of Ireland and the UK. Cobh was their first port of call. Already stunned by the thousands who lined the quay to greet them, the two men were greatly moved to hear the Laurel and Hardy theme— the Cuckoo Waltz — booming out from the gigantic carillon bells of St Colman’s Cathedral. On landing, they tracked down Staf Gebruers, the carillonneur, and the 22-stone Hardy gave him a bear-hug. They later declared that hearing the Cuckoo Song on the Cobh bells was one of the greatest thrills of their lives.

In 1914, Bishop Browne of Cloyne ordered a carillon of 16 bells for the newly completed Cobh Cathedral, the greatest construction project in the history of the Roman Catholic Church in Ireland. Taylor’s of Loughborough, the English foundry, then persuaded the bishop to bump up the order to 42 bells because Cobh is such a perfect amphitheatre. Although the carillon was ready by 1915, the threat from German U-boats meant that no merchant ships were willing to transport them across the Irish Sea. The day was saved when Admiral Sir Lewis Bayly, the senior officer in Cork Harbour, provided a naval escort to bring them safely to Cobh. A further 7 bells have since been added to the carillon.

WHAT’S IN A NAME?

Cobh, or Cove, was renamed ‘Queenstown’ after Queen Victoria briefly disembarked from the Royal yacht here in 1849. The name held until 1920 when, pledging allegiance to Dáil Éireann and the Irish Republic, Cobh Urban Council renamed it Cobh. An extensive fleet of American destroyers was based here during the last 18 months of the First World War, helping to tackle the threat of German U-boats and to conduct merchant and troopships safely between Ireland, England and the Western Front.

In 1912, RMS Titanic dropped anchor 7 nautical miles out from Cobh and collected 123 new passengers. Three and a half days later, the luxury liner struck an iceberg and sank with the loss of 1,517 lives. Among the survivors was the Irish-Argentine stewardess Violet Jessop. Seven months earlier, she had been on the Olympic, another ocean liner, when it collided with a warship. Amazingly, she was also on the Britannica when it hit a mine and sank in 1916. On that occasion, she zipped to her cabin and grabbed her toothbrush before plunging into the water. She later explained that the toothbrush was the item she most regretted leaving on the Titanic. See here for more.

THE PRINCE OF PERU

William Russell Grace was born at Riverstown [Glanmire?], near Cobh, in 1832. He made his fortune selling goods from a floating warehouse off the coast of Peru to traders in guano, aka dried bird or bat poo, a key ingredient in fertilizer. He went on to be the first Roman Catholic to serve as Mayor of New York. During a second term, he received the Statue of Liberty from France on behalf of the American people. W. R. Grace and Co., the company he founded, was one of the world’s biggest fertilizer and chemicals giants. When Ireland was on the brink of a second famine in 1879, he commissioned the USS Constellation, an American steamer, to sail from New York to Cobh with 3,315 barrels of food, clothing and other relief supplies.

In 2000, Ensign Marie Gleeson of Cashel, County Tipperary, became the first female cadet to capture the prestigious Fastnet Trophy, having achieved first place in her class. She went on to command the LE AOIFE from 2013 – 2015 and served on a UN mission in Chad. She very kindly met with my father, my brothers and I when we visited the naval base at Haubowline in 2018, at which time she had served over 20 years in the Irish Navy and reached the rank of Lieutenant Commander. She retired from the Irish Navy in 2019 and founded NavMar Leadership.

The Pfizer Pharmaceutical plant began producing Viagra at its plant in Ringaskiddy, Co Cork, in 1988. It generated over $1billion in sales every year for 17 years, reaching a peak of $2.1 billion in 2012. Sales of the drug, which assists with erectile dysfunction, appear to be on the rise in 2022.

With thanks to Cllr. Kieran McCarthy (Cork) and Christy Keating for walking me through Cork and Cobh.