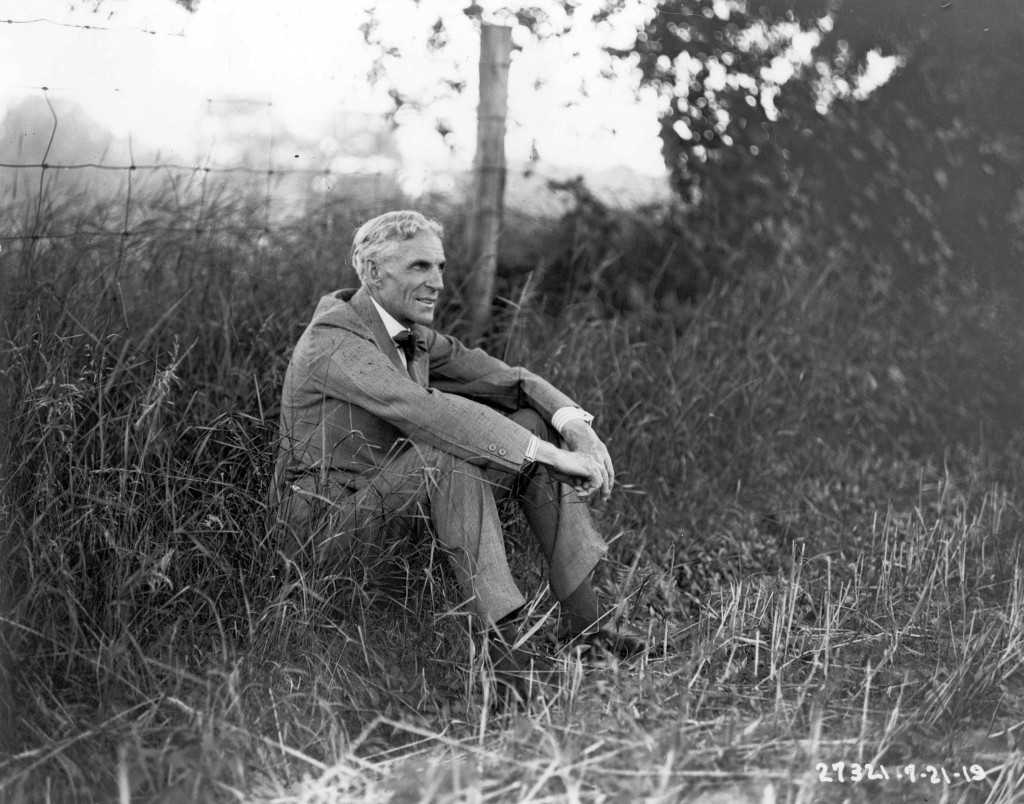 Henry Ford was an avid believer in consumerism as the key to world peace. The belief made him one of the richest and best known men of his age, not only because he founded the Ford Motor Company but also for his pioneering use of assembly lines in the mass production of cars. Indeed, he had the concept down to such an art that a Model-T automobile could be built from scratch in 98 minutes. On top of that he single-handedly raised workers wages and lowered costs across the US and, as such, is credited with creating the American middle class.

Not bad for a lad from West Cork.

Henry’s forbears are said to have come from the parish of Ardboe, Co Tyrone, but by the 18th century they were settled in West Cork. Henry’s great-grandfather William Ford leased a 23-acre farm on the Bence-Jones estate at Lisselan, between Ballinascarthy and Clonakilty. William died young in 1818 and is buried in the nearby churchyard at Kilnagross. His widow Rebecca Jennings Ford subsequently raised their five sons.

In 1832, Rebecca’s elder sons Samuel and George Ford emigrated to Michigan, lured by the possibility of buying their own land. There was no such option in Ireland. They duly purchased some land at Dearborn, 9 miles outside Detroit, where they carved a farm out of the remote pine forests, clearing fields, planting crops and constructing timber farmsteads.

Fifteen years later, amidst the black famine of 1847, the elderly Rebecca Ford set sail from Cobh to join her sons in the USA. She was accompanied by her two younger sons, John (Henry’s grandfather) and Robert, and their families. Tragedy struck when John’s Clonakilty-born wife Thomasine (nee Smith) died of fever en route, leaving her husband to raise six children. She was buried in the quarantine station at Grosse Ile.

Upon arrival in Michigan, George Ford introduced John Ford to some old friends. Thomas and Henry Maybury were Protestant brothers from Bandon, Co Cork, who had emigrated in the 1830s. On January 15th 1848, Thomas Maybury sold John Ford an 80-acre farm in Redford Township, giving the young Irishman just the start he needed.

John’s eldest son, Billy, was Henry Ford’s father. Born in Cork and educated at St. Joseph’s High School, Billy was 21-years-old when the family emigrated to Michigan. At Dearborn, he helped his father on the farm. Both men also found employment on the westward extension of the Michigan Central Railroad. Such work enabled John to pay off the mortgage on the farm and, by 1858, 32-year-old Billy was able to buy the southern half of the farm.

Three years later, the industrious Billy married the dark-eyed Mary Litogot, an orphaned Belgian girl. She had been raised by one of the Ford’s neighbouring farmers, the Cork-born Patrick O’Hern (Ahern) and his wife Margaret. Thomas Maybury threw open his home for the wedding ceremony. In 1867, Grandfather O’Hern (as Patrick was called) transferred ownership of his property to the fortunate young couple. Billy was now a pillar of the local community – deacon of the church, a member of the school board and justice of the peace.

Henry Ford was the eldest of Billy and Mary’s six children. He was born on the farm in July 1863 and named for an uncle. His family’s relatively prosperity ensured that, while he helped out on the farm every day, he had the luxury of time to develop his fascination with engineering. From an early age he was sticking tweezers into his pocket watch, steaming earthen pots of water and sketching the farm’s steam engines. He took a keen interest in geometry and physics at the one-room school where he was educated. He was also much entranced by nature. His first memory was of his father slowly and deliberately turning his plough from a furrow in order to avoid disturbing a bird’s nest under a fallen oak.

Henry’s mother died in 1876 when he was 13-years-old. Three years later, he made his way into Detroit and found work as an apprentice mechanic. In 1881, he returned home to help with the farm, and to develop his interest in steam engines.

In 1891 he became an engineer in the Edison Illuminating Company in Detroit. In his spare time he began experimenting with the recently invented internal combustion engine. By 1896 he was savvy enough to have built his own petrol-powered vehicle, the Ford Quadricycle.

The following year, William Maybury, son of his father’s friend Thomas, became Mayor of Detroit, retaining the office until 1905. The new Mayor recognised that ‘the fast developing automobile . . . is bound to be a feature of the century on which we are about to enter’. He predicted that ‘it will extend and revolutionize the existing modes of transit in cities’. Impressed by Henry’s inventiveness, Maybury gave his fellow Irishman his full support, personally financing his research and introducing him to useful investors, such as Irish-American lumber baron William H. Murphy. By 1903, Ford was Chairman of the Ford Motor Company. His proud 78-year-old father, John Ford, passed away two years later.

In 1908, the company launched the Ford Model T (known as the Tin Lizzie or Flivver), the most reliable, efficient and affordable car on the market. By introducing the assembly line in 1913, Ford was able to speed up production and lower costs still further. He also paid his workers a very generous $5 per day wage, thus ensuring his employees became a ready-made market for his cars.

By 1918, half of all cars in America were Model T’s. Before the assembly line was introduced, they came in many colors. However, the assembly line mandated black because no other colour dried quick enough. Ford famously announced: ‘Any customer can have a car painted any colour that he wants, so long as it is black’. When production of the Model T stopped in 1927, there were over 15 million of these cars in existence.

Henry Ford never forgot his family ties with Ireland. In 1912, he paid his first visit to Cork, dropping in to Fair Lane on the city’s northside – now Wolfe Tone Street, where Grandfather O’Hern was born. In 1917, he was granted permission by Britain’s wartime government to build the first Ford plant outside of the US at the Marina in Cork. Two years later, the Cork factory produced its first Fordson tractor. By 1930, the workforce had reached 7,000, making it the largest Ford employer outside the US and the second-largest employer in the Irish Free State after the railway. From the 1930s, the Cork factory went into decline, finally closing down in 1984. One of its last jobs was to build the Popemobile for Pope John Paul II’s visit to Ireland in 1979. In 2000, the people of Ballinascarthy unveiled a full-sized stainless-steel replica of a Model-T Ford in memory of their most famous son.

Estelle Rasche Treacy hold up her baby Mary Catherine to meet Henry Ford at Swallow Falls, Maryland, circa 1918. Steve’s father James Joseph Treacy and his brother John Thomas are in the foreground.

The Vagabonds on Tour

In August 1918, Henry Ford embarked upon his first camping trip to Swallow Falls State Park, Maryland, with fellow industrialists Thomas Edison and Harvey Firestone, and naturalist John Burroughs. This gang of four made several trips together and referred to themselves as the Vagabonds. A 7-page article on the camping trip (“Henry Ford Camped Here” by Caleb Winslow) featured in a periodical named “Valleys of History” by Potomac Edison Co. (Potomac Edison 1969).  My thanks to Steve Treacy who sent the below account to me in July 2022, extracted from Modern Maturity, August-September 1974, as well as the photograph to your right.

Steve’s grandfather James Patrick Treacy (1876-1951), who met Ford at this time, was the first Ford automobile dealer in western Maryland from 1909-1936. Born in Gortnagoyne in the Garrafrauns area (the Shee estate) of County Galway, James was the son of James and Mary Boyle Treacy. They emigrated to the USA when young James was a boy. James opened a store in Oakland, Maryland, in 1905 and remained in business for the next 43 years. He also served as director of the First National Bank in Oakland and ran a store in Keyser, West Virginia. 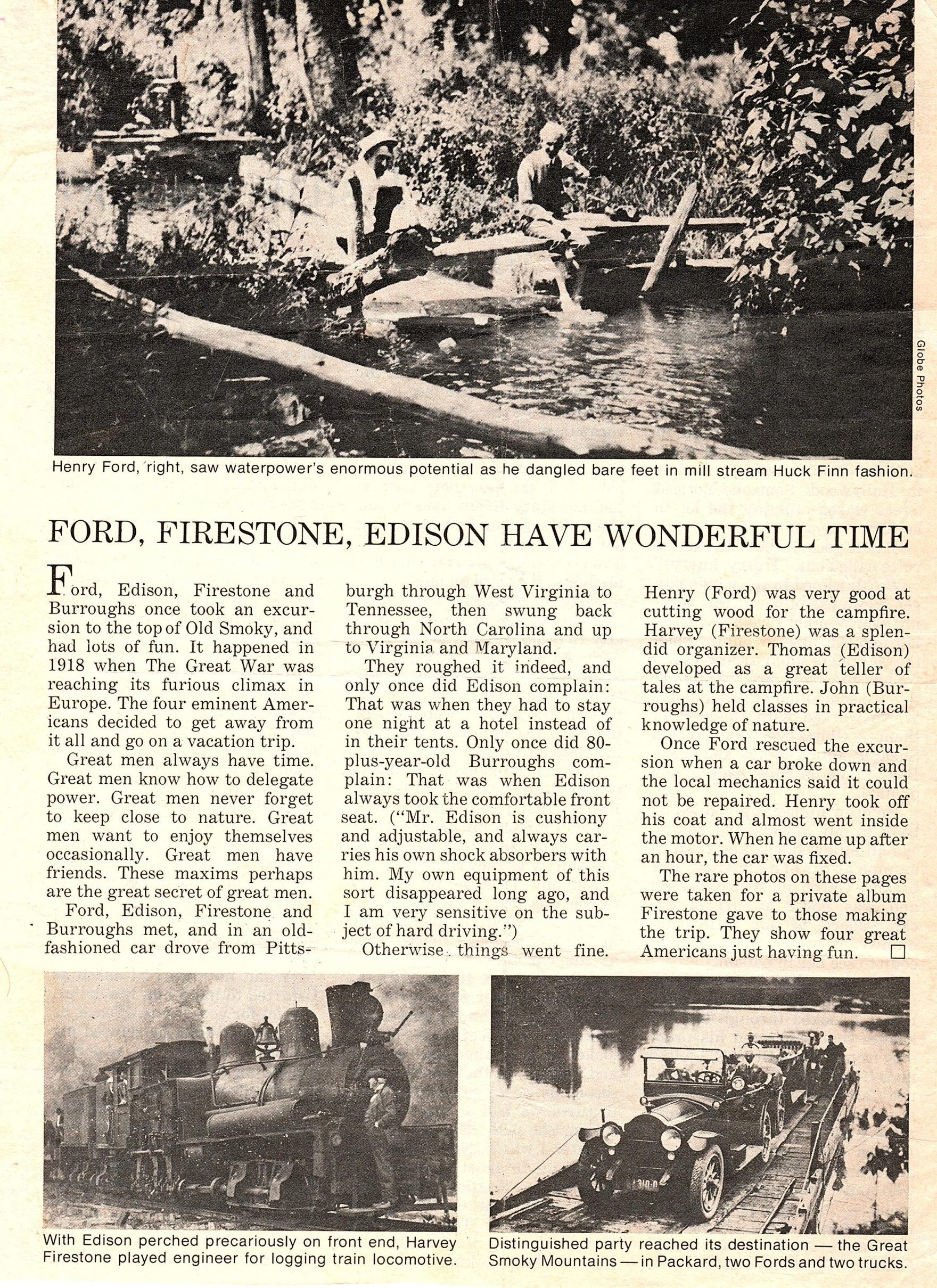