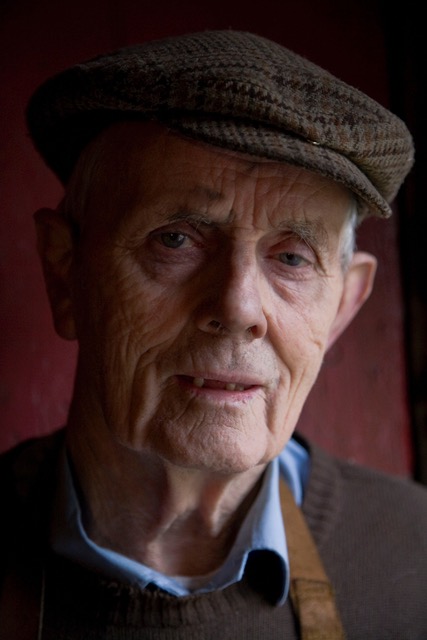 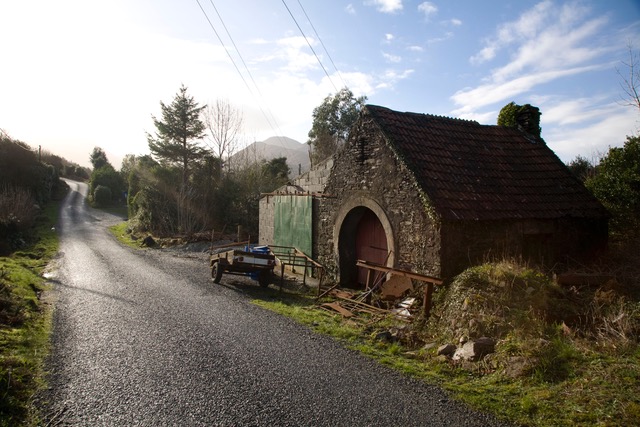 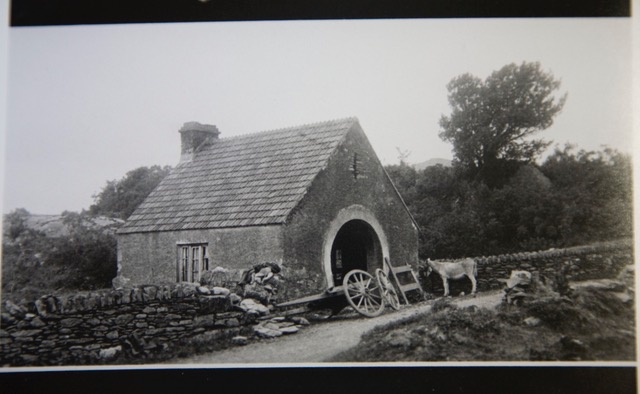 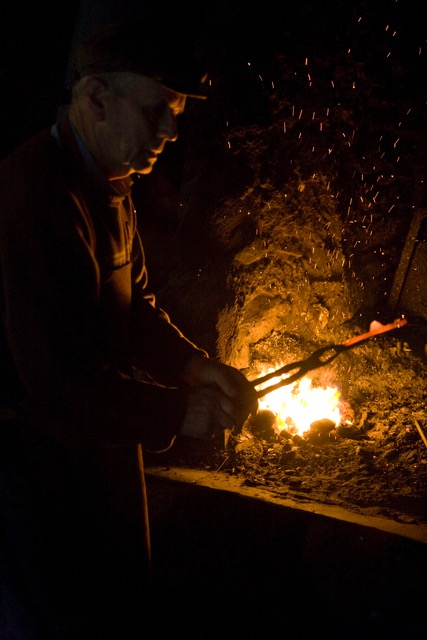 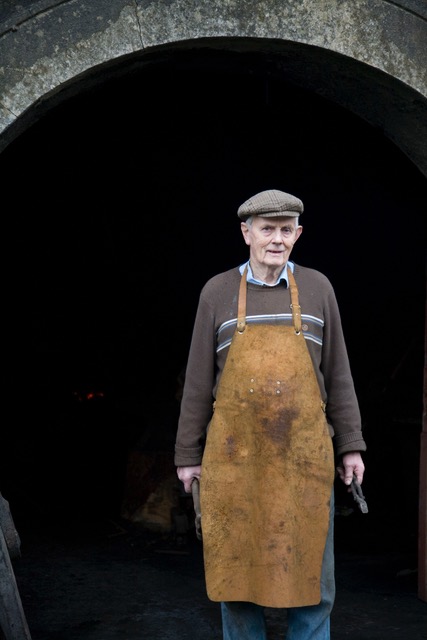 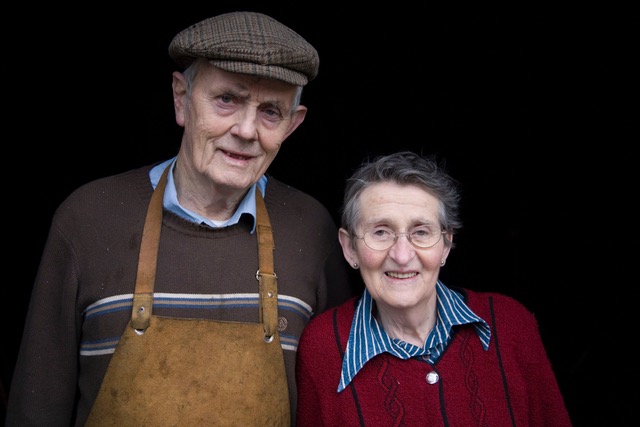 Liam and Maureen O’Shea standing outside the family forge on the Beara Peninsula. Photo: James Fennell.

An interview from the Vanishing Ireland series with the late Liam O’Shea, blacksmith, of the Lauragh Forge, Killarney, Co Kerry, touching on his father’s experiences in Manhattan and the days when the forge was the hub of the community.

Liam O’Shea is at work when we arrive, silhouetted in the horseshoe-shaped entrance of his forge. A tall, gallant man, he is dressed in blacksmith’s apron and cap. His family have been farriers in Lauragh for at least six generations. He is working on a new band for a cartwheel. The sound is ancient, as old as the Iron Age, with a merry lilt to its echo. The patient churning of the bellows. Dark smoky clouds hissing and rumbling over deep-red coals. The rhythm of the hammer, tongs and anvil as the red-hot metal bar is slowly beaten into shape.

The Lauragh Forge was built in the late 18th century to service the Marquis of Lansdowne’s estate at nearby Derreen House. The landscape here is breathtakingly beautiful, all bubbling brooks, lush mosses and medieval trees. But no matter how spectacular the scenery might be, the Beara Peninsula was not an easy place to live when Liam’s father, Mike O’Shea, was a young man in the 1890s. There was no employment, not much food and the families were simply too big for the cottages they lived in.

Born in 1875, Mike was the eldest of thirteen children, born and raised in a cottage by the forge. Their father was Sean O’Shea and the forge itself was known as ‘Sean O’s’. All thirteen children later went to America. Mike was the first to go when, in 1895, aged 20, he made his way to Queenstown pier (now Cobh) and boarded a boat to Canada. ‘We don’t know how he got the price to go’, says Liam’s wife Maureen. ‘I suppose it must have been very little at the time. Then he sent home the fare for the next child to go. And that child did the same. That’s how they all went out’.

By 1910, Mike was a well-established blacksmith in Manhattan, employing the skills his forbears had honed back in the Kerry forge where his son still works today. Many decades later, Maureen visited New York and saw the place where the old man shod the horses. In later years, Mike would tell his sons of winters so hard that a barrel of boiling water would freeze solid within an hour. ‘Sometimes he held the nails in his mouth while shoeing’, recalls Liam. ‘And with the heap of cold, it’d freeze onto his lip’.

In 1911, word arrived that Mike’s mother had passed away. Sean was struggling to raise the younger children, including eight-year-old twins. That same year, Mike sailed back to Ireland to help out. A new doorway was hung on the forge in 1911, notes Liam, ‘and it cost 11 shillings’. The doorway now has the letters of the alphabet stamped all over it. If there was a shrine to Mary Magdalene nearby, conspiracy theorists would have a field day. The letters are in fact the legacy of 99 years of branding irons, forged and tested by the O’Shea’s of Lauragh.

Although Mike did briefly return to New York, perhaps to set up the twins, he succeeded to the Lauragh Forge on the death of his father in 1927 and never again left Ireland. When asked of his time in America, Mike O’Shea replied that any day he spent in Kerry was better than the best day he had in New York. None of Mike’s siblings ever returned to Ireland except for a sister, many years younger, who flew over in 1982 to attend the wedding of Liam’s oldest son. Two of the sisters famously held court around a table at their house in the Bronx where they conversed in Irish.

Liam Seán Ó Shea was born in 1927, the year his grandfather died. He was the fourth of six children, five of whom were alive for a family reunion in 2008. One brother became a Garda in Tipperary, another settled in England and a third brother Paul drove a bus in New York for close on thirty years. Paul still speaks with a broad Kerry accent and if you met him today, ‘you’d think he never left, except that he lost the hair’.

In 1955, Paul Shea (not O’Shea) came back for a visit from New York. He was stunned to see a neighbour get down on bended knee and doff his cap as Lord Mersey, the heir to Derreen House, walked by. ‘Christ, my brother thought he’d gone out of his mind or something’, says Liam. But the old world was rapidly changing in Ireland. The Mersey’s did not endear themselves locally, remaining so aloof that they would walk past ‘the people’ without acknowledging any of them. ‘You can’t show any bigness like that now’, counsels Liam.

It seems Liam, the second son, was groomed for the forge from an early age. ‘I stayed here with my father all the time’, he says. ‘We were down here from the morning on and I tell you one thing, there was a lot of sweat lost in this forge’. They were the only blacksmiths in the area, the closest options being Kenmare or Castltownbere.

‘When I was young, and all down through the years, the horses going to the creamery came here to be shod every morning. And the donkeys and the ponies. They’d come from every end of the parish’.

Sometimes the men building the roads summoned Mike to bore holes in the rocks so they could fill them with dynamite and blow them apart. ‘Whatever way he worked the drill, he had a gift for doing it that it wouldn’t get blunt even if he was drilling for a week’, marvels Liam.

During the 1940s, Liam and his father were side-by-side, straightening nails, bending horseshoes, moulding wheel-bands. ‘We worked all day and every day and sometimes Sunday too’. They made feeding troughs for sheep, grappling hooks for mussel farmers, field gates and fire-grates. ‘We were badly paid’, says Liam. ‘The money wasn’t there. People hadn’t the money. And you’d have to wait for the money too. There’s a big change in the times now’.

Horseshoes came by the bag, one for the front shoe, one for the back. ‘In the 50s I would buy a box of nails, 25 pounds in a box, and it used to do me a fortnight. It would cost me one pound seven and six at that time. A pound of nails would cost you 10 shillings.’ ‘It might be 8 or 10 Euro’s today’, chips in Maureen helpfully.

‘But we got all the gossip too’, he laughs. ‘If there was rain, you could fit six or seven in the forge … and because of the fire, you’d have plenty of callers.’ The consistent heat of the forge fire was fuelled by special Blacksmith’s Coal, imported by the ton.

‘There were no cars in that time, and everybody walked. My father had some kind of a gift of speech. He was in America and he had the gab. He would say something to everybody who passed on the road, and they’d all stop. There’s no stopping now. They’re all in cars.’

Liam still regards his father with a degree of awe. ‘I never asked him much because he wouldn’t tell me’, he says. ‘But I picked up a lot of information when he was giving it to other people that were in America with him and came back’. For instance, that the forge was once thatched. And that Mike and his father had ‘done a lot of work for the Lansdowne’s’, but that it became ‘hard to work for them’ when things went ‘soft’ during the War of Independence.

Mike O’Shea died at the age of 75 in 1950, and Liam took the helm. On a good day, he would have seven horses shod by lunchtime. However, as the tractor began to replace the horse, so Liam found he was obliged to pack his blacksmiths tools and set off around the Kingdom, down to Castletownbere, up to Kenmare and onwards again to Kilgarvan where he operated out of another man’s forge. ‘I shod sixteen horses one day’, he says. ‘I often did twelve hours in a row. Take the shoe off, take up the hoof, fire them, drive them, pinch them and let them off. That was the go that time. It was hard work alright’.

Liam shows me a photo, dated 1909, of two old men standing outside his family forge with a donkey and cart. He leans forward and taps the photo gently with his forefinger. ‘Them two men have no toothache now, hey?’, he observes.

He’s a witty, intelligent, charming man and loves gathering and redistributing information. He adores it when strangers arrive at the forge seeking directions because he almost certainly knows the answer. ‘I knew every house between here and Castletownbere’ he claims although, ‘since the young crowd came in, I wouldn’t know them all’.

In 1958, eight years after his father died, Liam married Maureen, a wee girl from across the Healy Pass in Adrigole. Her voice is sometimes censorious but always musical and laced with humour. ‘A good husband is one who washes up when he’s asked and dries up when he’s told’, opines a proverb on the kitchen wall. Liam has a bold streak but he is more than willing to be kept on the straight and narrow by his wife. Indeed, it is quite clear that this golden couple are still very much in love. When we suggest Maureen stand in for a photograph, she says ‘No’ nine times in the same sentence. Liam gets her jacket, raises an eyebrow at her and slips her jacket on. No words are exchanged. He follows it up with an encouraging nod and out she comes for the snap.

The couple have three boys and a girl. Although very horses came to be shod in the forge anymore, Liam taught his young sons all the other tricks of the blacksmith’s trade. However, proud as he is of them, it seems unlikely any will take on the forge. Liam is not without hope. ‘If a fellow was young now and wanted to shoe horses, he could make plenty of money’, he reckons.

With thanks to Fergal O’Shea, Liam O’Shea junior and the Blennerhassetts.