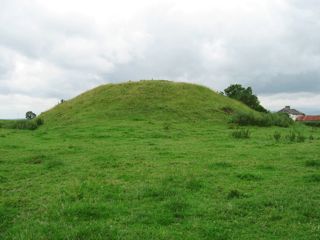 The coronation mound of the Maguire kings is located in the Moate ringfort on the Hill of Cornashee above Lisnaskea.

In a quiet field above the County Fermanagh town of Lisnaskea stands an ancient mound, almost certainly a Neolithic burial tomb, known locally as the Moat Ring, or Sciath Gabhra in Irish. This is the spot where fifteen men were crowned as Kings of Fermanagh between 1264 and 1589. All fifteen belonged to the Maguire family, once among the most prominent dynasties in the north-west of Ireland.

By the standards of most Irish kings, and indeed of many European kings, the Maguires boasted a remarkably serene track record. Their reigns averaged over two decades each, with many notching up over forty years, while challenges to the throne were rare and only one of the fifteen was assassinated.

Occasionally they were obliged to arm and defend themselves against the O’Neill’s, O’Donnell’s and other families, or to resolve internal squabbles, and some Maguires were wont to invade neighbouring lands. However, in general, Fermanagh under the Maguires was a stable place for nearly three centuries. 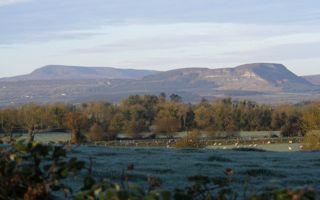 Benaughlin Mountain is said to be the resting place of Donn na Binne (“Donn of the peak”), the legendary ancestor of the Mag Uidhir (Maguire) chiefs of Fermanagh and a king of the Sí.

The Maguires were exceptionally progressive, their households replete with historians, poets and learned men. They were also tremendous benefactors of the Christian church, introducing new orders, endowing churches and embarking on pilgrimages to Rome and Santiago de Compostella in Spain. In their twilight, many retired in good time to prepare for their death,

The family descend from Donn Mor Maguire, a warrior who witnessed attempts by the Anglo-Norman authorities in Dublin to build castles at Clones, County Monaghan, and Belleek, County Fermanagh, during the reign of King John. Donn Mor also lived to see both castles destroyed by the indigenous Irish. In 1264, his son Donn Carrach Maguire was the first of the line to be crowned king of Fermanagh.  Hailed by the bards as ‘Ireland’s Most Generous Lord’, he lived at Lisnaskea and reigned for forty-two-years until 1301 when, as the Annals of Ulster recorded, he ‘rested in Christ’.

Donn’s descendants continued to expand the Maguires territory, albeit as a subservient family to O’Donnell of Tyrconnell who was, for the most part, subservient to O’Neill of Tyrone. Among the most influential Maguires was Philip of the Battle Axe who reigned from 1363 to 1395. He earned his moniker by fending off attacks by rival MacMahon, O’Neill and O’Connor chieftains in a series of gruesome battles. Fermanagh essentially took on the county’s present shape and size on his watch when he established it as a buffer kingdom between the warring realms of Ulster and Connaught. His greatest asset was a fleet of white sail boats on Lough Erne that gave him mastery of the waters. At one point, his fleet sailed into Lough Oughter in County Cavan and captured the O’Reilly chief who subsequently became his foremost ally. 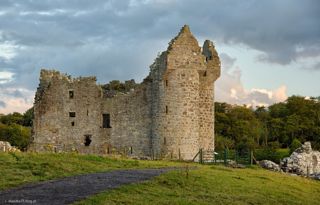 Hugh the Hospitable, Philip’s son, built the original castles at Enniskillen and Monea and was widely applauded for his virtue and munificence. Once a year, he would seat himself beneath a whitethorn tree at Monea at sunrise, from where he would receive his extended family and neighbours, listening to their woes, dispensing wise counsel and handing out dowries to girls whose fathers were in financial difficulty. A frequent pilgrim to Rome, Spain and Italy, he was returning from the Holy Land when he died in Kinsale, County Cork, in 1428.

Hugh’s successor, Thomas the Younger, was considerably less pious. He once decorated his garden with the heads of sixteen O’Rouke nobles whom his men had slain during a raid on their strongholds at Bawnboy and Ballyconnell. Thomas’s descendants were the senior or ‘Lisnaskea’ branch of the Maguires while those of his brother Philip became the junior or ‘Enniskillen’ branch. These two branches evolved into increasingly bitter rivals as the crown passed from one to the other over the ensuing century.

By 1500, the family owned almost all of the present county of Fermanagh and manned all the principal positions; the bishops, archdeacons, priors and parish priests were all Maguires, while most other families kowtowed to them. The Maguires loyalty swung between the O’Neill and O’Donnell families as those two warring dynasties vied for supreme power in north-west Ireland. 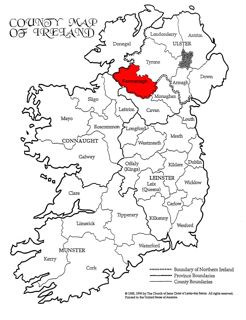 In the late sixteenth century, such self-contained political disputes were completely trumped by the arrival of a new force in the region, namely the Tudor army of Queen Elizabeth. This coincided with the reign of Cuchonnacht II, one of the most scholarly Maguire chiefs, who acceded to a request to surrender his lands to the queen in 1585; he received them back without its church lands. When the Tudor administration in Dublin formally shired Fermanagh the following year, Cuchonnacht must have known the end was nigh. The Tudors had already seized most of Munster and, in 1585, they effectively took control of Connaught. Almost all of Ireland was now under Crown control, bar certain pockets of Ulster.

It fell to Cuchonnacht’s son and heir Hugh (Aodh) to defend his ancestral kingdom. In 1589, this fearless young man stepped down from the coronation stone at Lisnaskea as the 15th Maguire chief of Fermanagh. He realised that his late father’s conciliatory attitude to the Tudors was a ticket to nowhere. Loyalty to the Crown clearly counted for little; the teenaged Red Hugh O’Donnell, whose father had been a loyal supporter of the Crown, was banged up in Dublin Castle for four years. Hugh Rua McMahon’s friendship with the Tudors had ended when they hanged him outside his own front door.

Initially Hugh Maguire played the game, accepting a knighthood in Christ Church Cathedral in 1591. The following year he helped Red Hugh, his cousin, to break out of Dublin Castle. Both men now realised that the Tudors posed an existential threat to their world. They gradually persuaded the region’s most powerful noble, Hugh O’Neill, Earl of Tyrone, raised in Queen Elizabeth’s court, that he must come on board.

As the Nine Years War began, so Ulster became a battleground between the warring armies of Protestant England and Catholic Ireland. Initially Maguire and his allies managed to push the English out of Fermanagh but reinforcements returned, captured both Enniskillen and Lisnaskea and installed a string of garrisons from Newry all the way to Ballyshannon, including Monaghan, Benburb and Lisnaskea.

The Irish enjoyed some exceptional successes, not least when O’Neill’s great victory at the battle of the Yellow Ford gave him complete power in Ulster in 1598. However, when their armies moved south, the campaign began to flounder. In 1600, Hugh Maguire led his men as far south as Cork where he rashly decided to raid an English camp; he completely underestimated his opponents who overwhelmed them, killing 32 Maguires, including Hugh, his son, his foster-father and his chaplain. Legend holds that Hugh’s horse refused to eat after his death and withered away. Hugh was buried alongside his ancestor and namesake, Hugh the Hospitable, founder of Enniskillen, who had been buried in Cork 172 years earlier.

The loss of Hugh Maguire was an enormous blow to the Gaelic alliance, not least when a power struggle among his heirs saw one claimant form a treacherous pact with the Tudors that paved the way for English conquest of the region. This came just as O’Neill and O’Donnell saw their dreams shattered by an absolute English victory over their combined forces at Kinsale.

Hugh Maguire’s brother Cuchonnacht Og (Constantine) is considered the last Maguire king of Fermanagh, although he was never crowned. He returned from the defeat at Kinsale to find his lands devastated by the English conquerors. By 1605, over half of his estate had been seized and parcelled out to planters. The following year he purchased a vessel in Rouen, dolled it up as an innocuous fishing boat and sailed it back to Lough Swilly in County Donegal. On 14 September 1607, approximately one hundred passengers boarded Cuchonnacht’s ship at Rathmullan. The ship duly sailed for France with the cream of Ireland’s Gaelic nobility in what became known as the Flight of the Earls. 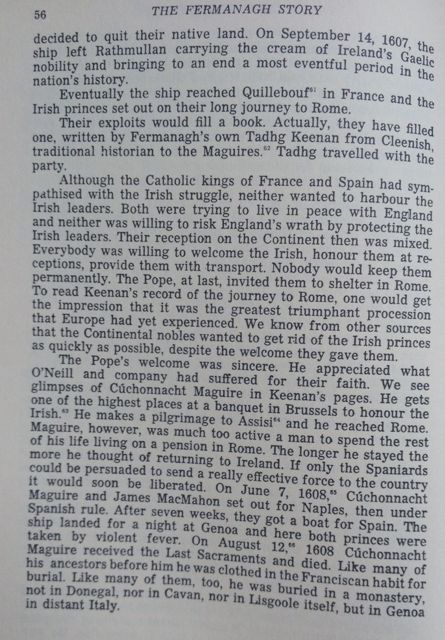 Having reached Quillebeuf in Normandy, most passengers went overland to Rome to meet the pope. Cuchonnacht was among those who reached Rome but, always restless, he was determined to convince the Spanish king to send a new Armada to Ireland. In the summer of 1608, he joined forced with James MacMahon and boarded a ship at Naples that was bound for Spain. While staying a night at Ostia, both men became violently ill with fever and died. They were buried in a Franciscan monastery near Genoa.

The remaining Maguire lands in Ireland were subsequently vested in his kinsmen Bryan, who was created Baron Maguire of Enniskillen in 1627. Bryan sponsored the celebrated Annals of the Four Masters but his sons were also fated for a sticky end. His son Connor, the 2nd Baron, was hanged, drawn, and quartered in London for high treason after the Irish Rebellion in 1641, while his brother, Colonel Rory Maguire, was killed in a skirmish in 1648.

Over the next century, the titular Barons Maguire of Enniskillen served in the Jacobite and French armies, with the last one serving as a captain in the Comte de Lally‘s Regiment of Irish Infantry.

With thanks to Sarah McHugh, Vicky Herbert, John Patterson, Raphael Mullally and the Maguires of Charlotte, North Carolina, for putting the Maguire story my way. 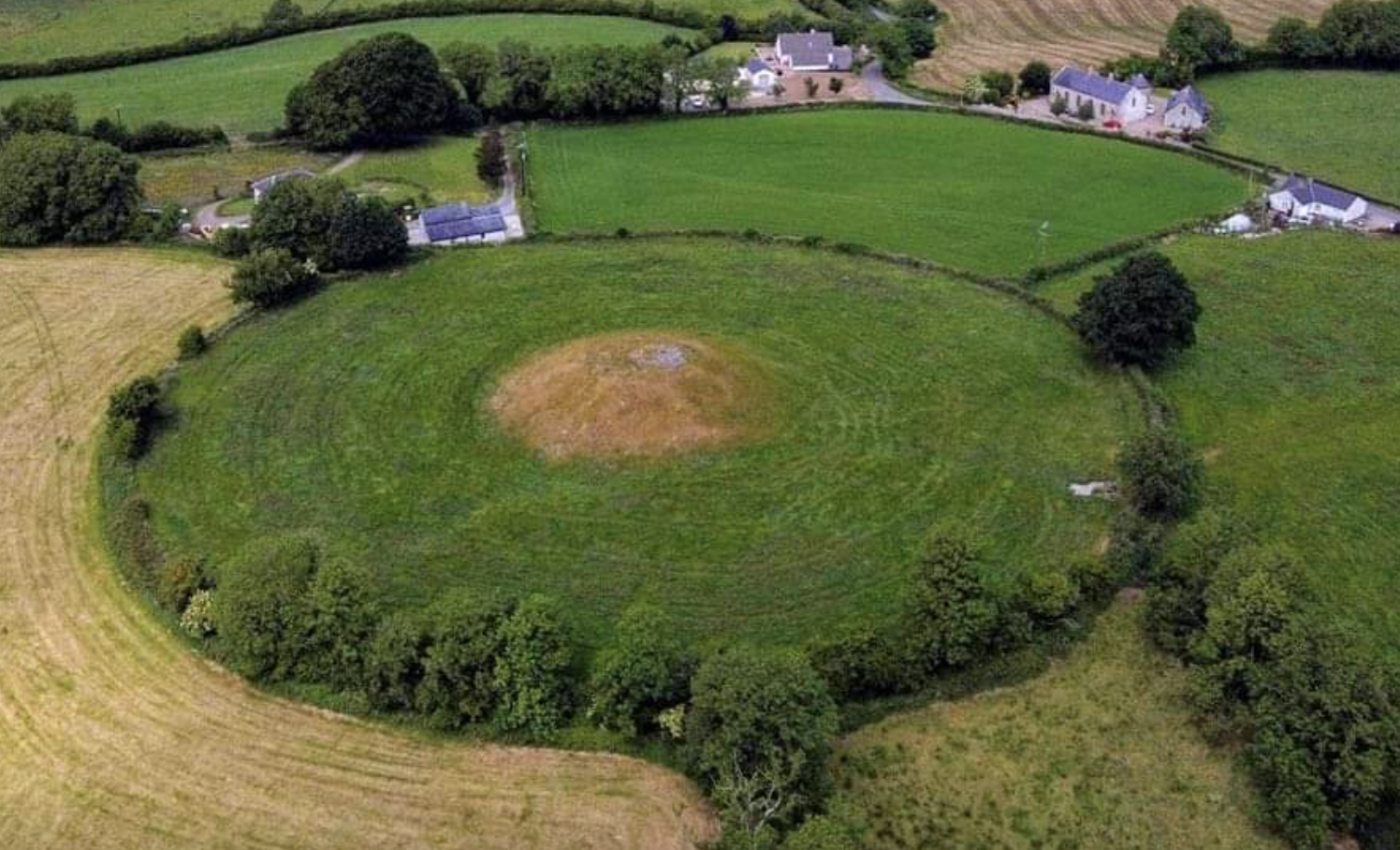 The Moate on the Hill of Cornashee above Lisnaskea, cropped from a 2020 photo by Ciaran Smyth.