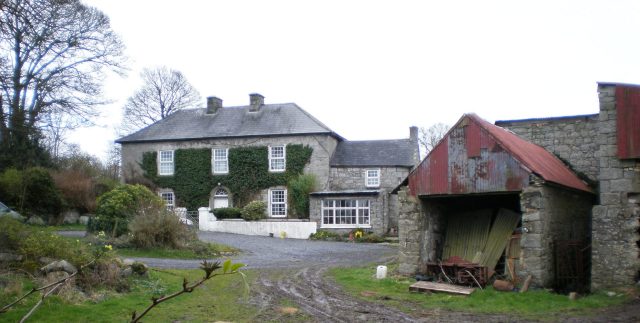 John Malone was Captain William McClintock Bunbury‘s agent for the farm at Lisnavagh from 1847 or 1848 until his death some thirteen years later, aged 61. Born in 1802, he was described as ‘a native of County Louth’ in an 1849 newspaper article in the Pat Purcell Papers. There was a John Malone who, born in Rathvilly, served in Royal Artillery from 1825 until he was discharged aged 30 in 1834.[1] He was buried in St Mary’s, Rathvilly, on 24 May 1862. [2]

Griffith’s Valuation, compiled circa 1852, show that Joseph was living in the Farm House at Lisnavagh at this time. (The same survey records James Pierson and Patrick McKew living side by side in what are now the Blacksmith’s Cottage & the Farm Cottage at the entrance the farmyard). See also the map here.

The Malones of Rathmore

It was formerly thought that John Malone, the Lisnavagh agent, was a son of Walter Malone (1756-1840), a miller whose family farmed and owned the Rathmore Mill on the banks of the River Slaney, some 4km south west of Rathvilly, for nearly 200 years. However, while Walter did have a son John, his John died in 1853, while John Malone the Lisnavagh agent lived until 1861. This does not rule out a connection and it is possible that John Malone was a connection, perhaps even a son of Walter’s brother Frank Malone, about whom no more is known save that he died in 1826. It is possible that these Malones descended from the Quaker family of that name who lived at Graney Cross, midway between Rathvilly and Castledermot.

‘On the 18th of July, Mr Walter Malone of Rathmore Mills, in this county, aged 84 years, much and deservedly regretted; the oldest tenant on the estate of Thomas Bunbury, Esq, of Moyle.’

Walter’s wife Ruth Cooper was the daughter of Joseph Cooper and Ruth Warren, daughter of Richard Warren of Ballymurphy by his wife Dorothy (née Kemmit). Walter and Ruth were married at St Columba’s Tullow in 1788. She predeceased him in 1809.

Walter Malone’s son Joseph Malone carried on the mill at Rathmore after Walter’s death in 1840 and was a significant tenant farmer of about 309 acres. Joseph leased the corn-mill, along with a house, offices and 24 acres and 21 perches of land, from Colonel Kane Bunbury of Rathmore Park. The four walls of mill buildings still stand, albeit just, together with a centenary memorial stone erected in 1839 by Joseph Malone in tribute to Walter Malone’s founding the mill in 1739. The metal skeleton of the mill wheel is also still in situ in the wall above the mill race. In the Griffith’s Valuations of the 1850s, the net annual valuation of the land was £20 and 10 shillings, the buildings were valued at £35 and the total valuation was thus £55 and 10 shillings. [3] Joseph had a second, possibly adjoining, lease of 20 acres from the Rev John B Megennis.

In Griffith’s Survey. which was conducted in 1852 around north-east County Carlow, Joesph leased 6 parcels of land from 3 landlords, which totalled just over 335 acres, namely:

Joseph married Alicia Burgess who predeceased him in 1851. Joseph’s death was reported in the Carlow Sentinel of 1 December 1866 as follows:

‘On the 30th November, at Rathmore, in the 73rd year of his age, Mr. Joseph Malone, an old and respected inhabitant of this county; deeply deplored by a wide circle of relatives and friends.  His remains will leave, for interment at Rathvilly, at one o’clock on tomorrow (Sunday).’

Joseph was buried at St. Mary’s Church of Ireland in Rathvilly. His only surviving son Walter Malone, who died in 1910, was married in 1868 to Elizabeth ‘Bessie’ Burgess, aunt of the late Bill Burgess. Originally from Lourm, her family had moved to Tobinstown twenty years earlier, leasing a farm from Captain McClintock Bunbury where Bill’s son Edwin Burgess farms today. (Elizabeth’s mother was a Piggot of Garristown [sic] and I think it is through the Piggots that the Burgess and Corrigan families of Rathvilly are related). Alas, Bessie Malone (née Burgess) died young in 1874 aged 28, having written a diary in 1866 which was in the late Dick Corrigan’s possession. Her widowed husband married again, a Miss Watters.

Walter Malone may also have been the father to another Walter, born circa 1809, which is the year Ruth Malone died aged 37, perhaps in childbirth. This Walter rented land at Ardistan and was already a widower when he was married secondly in 1867 in Baltinglass to Rebecca Hawkins, 35 years his junior. However, the younger Walter may have been the son of a William Malone.

On 26 December 1844, Joseph Malone’s eldest daughter Mary Malone was married in Rathvilly to Bartholomew Watters (sometimes Waters), second son of John Watters of Clogrennan, County Carlow. The Rev Megennis (sic) officiated at the marriage.  [Carlow Sentinel, Saturday, January 4th, 1845, p.3.]  Bartholomew was a farmer with over 100 acres at Tinryland at the time of Griffiths valuations. [4] By coincidence, Bartholomew and Mary Watters were the parents of Annie Watters who married Dublin docklands engineer George Halpin. Annie and George’s daughter Eva was the Eva Halpin who married Lt Alfred Rudall, first cousin of my wife’s great-grandmother.

In 1848, Joseph Malone’s younger daughter Ruth Malone married William Marlborough Douglas and lived in a house known as Oddfellow’s Hall, where William and Hazel Burgess lived until recent times. William and Ruth Douglas had eight children, all baptised in St Mary’s, Rathvilly. The Primary Valuation of Tenements for the Parish of Rathvilly indicates that William Douglas was leasing 47 acres from Lisnavagh during the 1850s. According to his descendent Liz Wade, there are three legends about when and why the Douglas family came to be living in Ireland. William Douglas, the first of the line, is said to have left Lanarkshire, Scotland, in about 1745-6 and settled at Clogh, near Baltinglass, Co. Wicklow. Alternative stories suggest the family arrived in Ireland about 1568 and 1649.

As such, William lived close to other members of the Douglas family already living in the area. His son, William Douglas (c. 1750-1798) succeeded him, presumably at Clogh. He and his wife (name unknown) had four sons and a daughter. One of these sons was, William Douglas (c. 1777-1855), is said to have taken over the lease for the land at Clogh on his father’s death about 1798. There is evidence (somewhere) of an Indenture concerning land at Clogh leased from the Rt. Hon. Edward Stratford, Earl of Aldborough, who died in 1801. William Douglas was married twice – firstly, in 1802, to Mary Colman and secondly, in 1813, to Sarah Valentine. By his second wife Sarah he had at least 10 children. One of these children was William Marlborough Douglas (c. 1820-1865) who farmed the 47 acres at Lisnavagh and married Ruth Malone. It may be noted that a William Douglas of Carlow provided the coffin for Captain Bunbury’s funeral in June 1866. [5]

Joseph Malone may also have been father of Fanny Malone who died in 1905.

With thanks to Bill Webster, Jean Ffrench, Liz Wade and Belinda Sibly.

[4] Bartholomew may have been a son of Henry Watters of Staplestown Lodge, Tinryland, and grandson of Philip Watters of the same address. Henry Watters graduated from Trinity College Dublin in 1810, went on to the King’s Inns and Lincoln’s Inn and became a barrister in 1816. By 1859, when he would have been pushing 70, Henry was listed as Chairman of Magistrates in Carlow. The report of Henry’s death in the Carlow Sentinel 1864 conclusively states that “the deceased left no issue”. However, Bartholomew predeceased him by 13 years and it is just possible that it means that Henry left no living issue. As Bill Webster put it, ‘The tantalising facts remain that both Watters families would have attended Staplestown Church at the same time and Annie married George Halpin at that church only 4 years after Henry’s death’.

[5] For further information on the Douglas family, please contact Kathryn Roundtree or Elizabeth Wade, great-great granddaughters of William and Ruth.