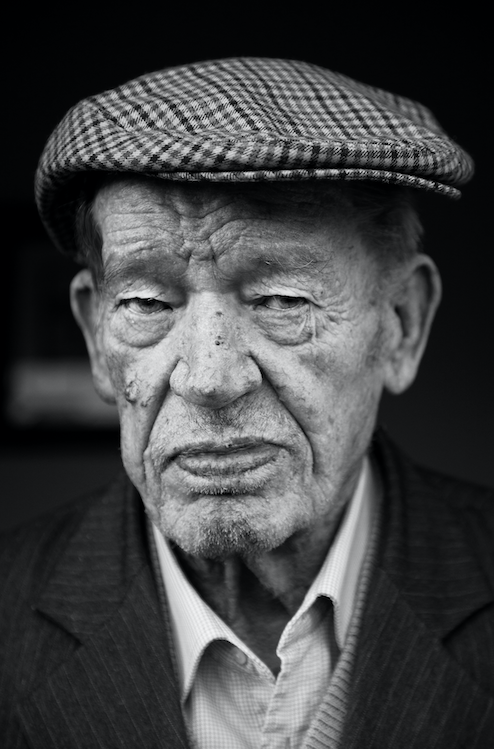 There is a shelf in Maurice Fitzgerald’s townhouse upon which an impressive number of small but gleaming trophies sparkle at passers-by. As I proceed towards them, Maurice puts out an authoritative arm and instructs me to take a seat beside him.

‘I was a great boxer’, he confides. ‘A heavyweight. Oh yes, I was highly dangerous and the whole town knows it. I’m Maurice Fitzgerald. One of the Normans. Did you ever hear of them? I’m a tough man. My right arm is a ten-pound sledge. Did you ever get a belt from a sledge? And my left arm is a kick from a mule. Do you know what a mule is?’

There have been Maurice Fitzgeralds in these parts for many long centuries. The first of the line was Maurice FitzGerald, the son of Gerald of Windsor and his wife, the beautiful Welsh Princess Nesta. He was a companion-in-arms to Strongbow and his progeny duly established the Fitzgeralds as one of Ireland’s most exalted Anglo-Norman families. Perhaps it is no coincidence that the present-day Maurice’s home is so close to the castellated stronghold of the Knights of Glin, one of the most senior branches of the Fitzgerald clan. ‘I suppose I must be related to the Knight,’ he muses.

Maurice’s forbears were based for many generations at Killacolla House, a large 19th century house, surrounded by trees, located some two miles east of the town of Glin. Killacolla translates as ‘the church by the shore’ but the original church has long since vanished. There was a small colliery on the land, but the low-grade coal was better suited to building walls than providing heat.

Maurice has a photograph of his parents on his mantelpiece. His father, also Maurice, farmed some 200 acres at Killacolla and managed the creamery at the local Glin Co-op. He married Catherine Normile from The Lodge in the village of Glin. [1] Catherine bore her husband seven children before his untimely death in 1933. ‘He died sudden at the age of sixty,’ says Maurice. ‘He had a heart attack inside his own bed.’

The original Maurice FitzGerald, the founding father of the Irish dynasty of FitzGerald, arrived in Ireland in May 1169 ten knights, 30 men-at-arms and 100 archers. The event marked the start of the Cambro-Norman invasion of Ireland.

Maurice was born in Killacolla House in 1919. ‘It was a lovely old two storey house, and we had the hardest rock in the whole of Ireland beneath us. There was a beautiful lawn there and my father planted a lot of trees around it a long, long time ago.’ His childhood was spent helping out on the farm, herding cattle, harvesting turf and going down to the shore to collect periwinkles for the dinner. He was one of five children. His elder brother Jack inherited the farm at Killacolla which is now owned by Jack’s son. Maurice’s younger brother Patrick joined the Gardai in West Cork, while his two sisters Agnes and Anna married locally. [2] Two more children Kitty and Cornelius died in early childhood.

Maurice was schooled in Glin during the days of Masters Seamus Duggan and David O’Leary. Master Duggan was a useful footballer and lined out for Glin GAA during the club’s glory days between 1926 and 1934 when they won seven county football championships. Maurice himself was no slouch on the pitch, going on to play full-back for Glin. ‘I was a very strong player, and I had a good long kick, 45 yards,’ he says. ‘God knows, we won a lot of matches.’ His footballing skills were evidently the foremost legacy of his school, which he left aged fourteen. ‘I was able to write my name and that was about it. But I was delighted to be gone from it.’

Maurice grins back at her. This is how they play together. Born in 1929, Mary grew up in Glin. Her father was an auctioneer and a hackney driver, well known for taking people up to matches at Croke Park in Dublin. ‘And driving at an average speed of 95 mph,’ adds Maurice. Minnie Dillane, Mary’s mother, came from Kinnard townland and had married another Fitzgerald, Tommy, with whom she settled in a two-storey house on The Mall in Glin. There was no running water in the house so young Mary and her six siblings were regularly to be found filling buckets by the village pump. Mary’s only brother Jimmy died as a young man and four of her five sisters emigrated to England. Her fifth sister was a National School teacher at Ballyguiltenane and Glin schools.

Maurice and Mary met in Glin in the late 1940s when all the action was out ‘on the street’. Much the greatest craic was to be had at the dances which took place at the bottom of the town, and occasionally on the nearby jetty. ‘I was a fairly good auld dancer,’ says Maurice.

‘And I was singing all my life, but I was never a good singer. Here’s one for you:

Somewhere, my love, there will be songs to sing,
Although the snow covers the hopes of spring
Somewhere a hill blossoms in green and gold
And there are dreams, all that your heart can hold’.

During one such night of merry-making Maurice and Mary became betrothed. They were married in 1950 and had five children in the ensuing eleven years.

Shortly after the wedding, Maurice’s mother provided £1,100 which enabled him to buy three fields near Glin and this is where Maurice farmed until he retired.

It was always Maurice’s dream to be a farmer. ‘As a boy I was living out the country in a big old house, working away the whole time on the farmland. My mother would tell everyone “there was nothing troubling him, only cows and calves.” We had forty cows at one time. And we had two brood mares, which my father bred. They were great jumpers and we were getting good money breeding off them. Every year the mare had a foal up in the Black Field at Killacolla but you had to sell them on quick or they’d eat all the grass before the cattle got in there.’

Greyhounds also played a significant role in Maurice’s life, and he was often to be seen at the races in Limerick. ‘The greatest dog I owned was Katie Rose and I won a £3,300 sweep with her in Limerick one night. Wasn’t that good money to take home long ago!?’

But dairy cows were his main business. ‘I had a few cows and I brought them on to the creamery,’ he says. ‘I had a motorcar and a trailer, and I would come into the creamery with the milk. We got good money back then and I had a fortune in the bank one time. But I thought, ‘What good is money in a bank?’ and so what did I do with it all then? I put up two milking machines. I suppose I was being too smart. What happened to all the money?’

‘There’s still enough to bury you’, remarks his wife dryly. While Maurice was working on the farm, Mary was being a housewife. She also spent close on thirty-five years working part-time at the library in Glin.

‘We had a great life, the two of us,’ says Maurice. ‘She says she knows nothing about farming but she knows everything. And she is one of the best wives in Ireland’.

But now Maurice wants to talk about his boxing career and why it ended. ‘The doctor said to me, ‘you must be careful. It isn’t your fist that will do harm. It’s your big shoulders. You have big shoulders. If you do not mind your big shoulders, you will kill a man and go to prison for life.’ He casts a wistful eye back at his boxing trophies and says, ‘so that was the end of my boxing days.’

Sometime later, as we leave, Maurice’s daughter Marie advises me that my leg has been pulled. The trophies in the cabinet are nothing to do with Maurice’s boxing. In fact, he never boxed. The trophies are awards he won for having extra-speedy greyhounds. And the big one in the centre was won by himself and Mary in a waltzing contest at the old cinema in Glin in 1962.

Maurice Fitzgerald passed away on 9 April 2012, Easter Monday. The book Vanishing Ireland was opened to his page and on display at his funeral.