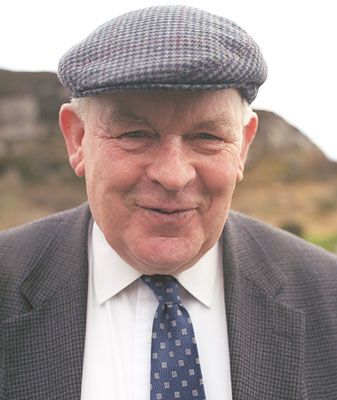 This story is extracted from Vanishing Ireland, Volume 1, published in 2006. Photo: James Fennell.

‘The cuckoo comes in April,’ says Mick Gallagher matter-of-factly, ‘and sings her song in May. In the middle of June she whistles her tune and in July she flies away.’

We are standing outside Mick’s cottage on the slopes of County Sligo’s Ox mountain. He was heading out to check on his small herd of cattle and collect some firewood. Such pastimes keep him active. It’s now over forty years since he and his wife left their former home in the town of Collooney and moved ‘up the mountain’ with their four small children. Collooney was just a village then but ‘inside a couple of years you wouldn’t know it at all’. At the age of seventy-four, the retired farm labourer certainly seems more at ease at this altitude than he might be amid the buzzing expansion of Sligo’s 21st century suburbia.

Mick has known Ox Mountain since his youth when he would visit his uncle, a thatcher, who lived in a small settlement called Gleann. ‘Every house had a thatched roof in that time,’ recalls Mick. ‘And when he wasn’t thatching, he was making crill baskets for the donkeys to carry the turf in from the bogs. It was all donkeys at that time. There were droves of them on the mountains.’

Mick is not sure where the Gallagher family came from. ‘I heard there was an order in for a load of brogues but it was muddled up and they brought a load of rogues instead.’ Green eyes twinkle and he breaks a contagious grin. He was the youngest of seven children. His father worked at the Collooney Mills where Mick himself worked briefly as a teenager. He still trembles with the memory of lumbering around hessian sacks of flour weighing anything up to two hundred weight (224lb).

When the mills closed in the 1950s, the nineteen-year-old secured a job on the estate of Donal O’Hara, chief of that clan, who lived in nearby Annaghmore. Mick remained there for the forty years, despite frequent advice from his siblings to give up on Sligo and move to England. ‘They’d be at me to go over every year – but not a bother,’ says Mick, whose few visits to England assured him his decision to stay was the right one. Emigration simply wasn’t a prospect he cherished. ‘I knew a family, seven sons, all fine men. They went to England and worked hard and died young.’

When he started ‘above’ at Annaghmore in 1951, the farm had one small Ferguson tractor. Everything else was done by men and beast. Mick was fond of the work horses, particularly one called Smiler. ‘He looked like he was smiling all the time but he’d nip you if he didn’t know you.’

They were busy days, harnessing horses in the morning, brushing the muck off them by night. And whether it was making hay, sowing oats or cutting rye grass, progress was slow. In time, the tractor came to replace the horse. ‘In the end, I was on a tractor, day in, day out. Ploughing in the winter, big open fields of barley, oats, potatoes and turnips. When you’ve sat on a tractor in bad weather with no cover on you, you know about it. You’d be pure stiff for the rest of the evening.’

One of Mick’s preferred sports as a youngster was catching rabbits. ‘Annaghmore was stirring with rabbits once,’ he says. ‘I was very lively at that time and I would be able to dive and catch them. They were lovely rabbits! Roasted or boiled, there was no meat to touch them. It was the healthiest meat you could get. In the war years, the whole country was buying rabbits. You’d get five shillings for a rabbit then.’

In 1954, the appalling decision was made to control the rabbit population by introducing myxomatosis to Ireland. Within a year, more than 90 per cent of Ireland’s rabbits had died from the disease. Although rabbits seem to making a comeback in the countryside today, it is still a notable rarity on either ‘Dish of the Day’ or the butcher’s slab. ‘Don’t talk to me about myxomatosis!’ says Mick sadly. ‘I know all about it. I was ploughing them down. They would get stuck on the grips of the tractor. It was unbelievable. I don’t see rabbits in this area anymore. They never came back.’

Mick Gallagher passed away in his 90th year on 15 August 2022, and was laid to rest at St Nathy’s Cemetery Collooney. He is survived by his wife Bridget, daughter Mary Rose (McDermott), sons Michael, Damien and Garry, son-in-law Pat, daughters-in-law Pauline, Vivian and Caroline, and grandchildren Oisin , Fionn, Adriana, Callum, Carla and Christine.

With thanks to Durcan O’Hara of Annaghmore House.