All Aboard the Rathwood Santa Train

December 2016. In the darkening, starlit night, we advance through small clouds of freezing fog and espy the train twinkling patiently in the near distance. Leading us forward are two elves, clad head to toe in evergreen and heart red robes, sturdy boots and conical hats. The bright yellow train is pointed westwards at the Enchanted Forest wherein Santa Claus himself is presently residing.

A couple of sharp whistle blasts indicates that we are about to depart. I pile into one of the open-air carriages with my daughters Jemima, 9, and Bay, 7, who gaze out in expectant wonder at this strange new world.

As we start to chug westwards, an elf by name of Choo-Choo reminds the girls that their mission is to track down the missing Christmas spirit in the woods. With 44 festive seasons under my belt, I decide I’d better adopt the same mission for my Grinch-like self.

Welcome to the Rathwood Santa Train, now a national landmark for the Christmas season. Born in 2006, it’s the brainchild of the Keogh family who run the hugely successful Rathwood shopping emporium outside the bustling market town of Tullow, County Carlow.

Patrick Keogh, the family patriarch, was a potato farmer who supplemented his income as an accountant to farmers throughout the area. In 1994, after 16 years of potato farming, he decided to convert the potato shed into a garden shop and homeware store.

Like Jack’s beanstalk, the operation has grown and grown ever since. The family have scooped up some outstanding gongs along the way, including Store of the Year at the Retail Excellence Ireland Awards 2013, while Patrick’s son James Keogh, the managing director, struck gold at Ireland’s Best Young Entrepreneur awards in 2015. 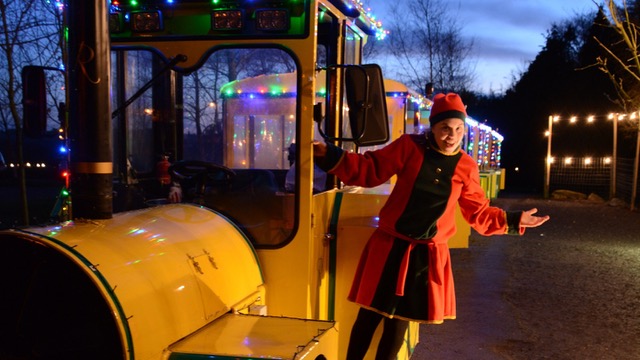 ‘Do you come here often?’ I inadvertently ask a couple standing nearby with a pair of small curly-haired boys. We are in a wooden chalet, deep in the Enchanted Forest, and the couple are shamelessly sporting full-on Christmas jumpers. Hers has a reindeer with a red nose that you can actually squeeze so it honks. (I refrain). His lights up as he moves like he is connected to something out of ‘Westworld’. I feel like I’m the lame-o at a fancy-dress party who has failed to dress up. I also feel justified in questioning their familiarity with the set-up because they clearly know the agenda and they keep revealing spoilers to their boys. ‘So, we’re going to Grampa Reindeer’s house next’, says the mother. ‘And then it’ll be Santy after that’, whispers the dad breathlessly, almost to himself.

‘This is the fifth year for me’, says she. ‘And the fourth for himself. Wouldn’t miss it for the world.’

‘Have you come from far?’

I’m impressed. It’s not easy establishing an emporium in the middle of, well, it’s not exactly nowhere but, to most people, it is kind of somewhere in the No-Man’s Land where the counties of Wicklow, Carlow and Wexford converge. An inevitable conundrum of such a location is how to draw a crowd but the Keogh’s have brilliantly tapped into this to such an extent that nobody I spoke to over the course of my visit was from any one of those counties. And yet, guided by the distinctive red signs that have sprung up across the area, they have found their way here to Santa’s Train.
An audience with Mrs Claus and her sidekick Jackie Frost kick-starts the adventure as they sow the seeds of giddiness that spread like wildfire through the children perched upon multi-coloured beanbags listening to their tales. At one stage, Jackie flips open a laptop – an ice-pad, as she calls it – and up pops Santa who waves at the children who wave back but he looks a little sad.

‘What’s wrong Santy?’ asks Jackie, deeply concerned. We have not been promised award-winning thespian skills but there is something refreshingly ‘Wanderly Wagon’-ish about this pantomime.

It transpires Santa cannot find the Christmas spirit, hence our designated goal. Jackie looks at the children, head askew, and performs a light search of each one. Hats are lifted in case it is to be found lurking underneath. 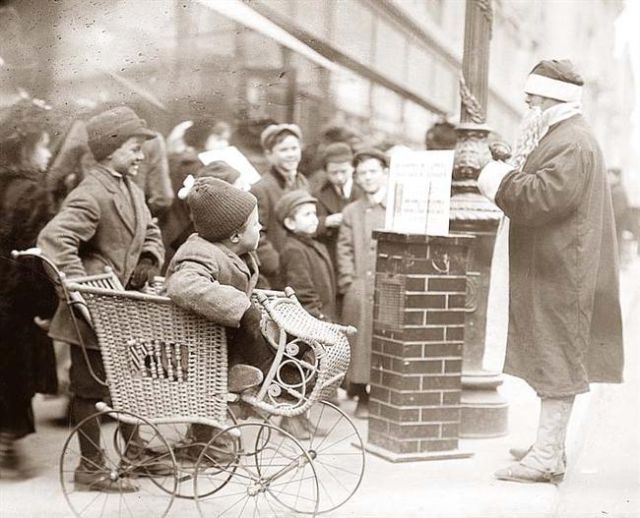 My girls are still devotees of Mr Claus. There were a few fledgling doubts prior to last Christmas Eve when my astronomically-inclined brother-in-law herded them and their small cousins out onto a frosty lawn and urged them to look out for Santa’s sleigh passing through the sky any moment now. It arrived bang on schedule and zipped through the starry skies, flashing its light and quashing all disbelief. By pure coincidence the International Space Station also passed overhead at around the same time but it was nowhere to be seen.

Santa lives in a woodland cabin deep in the forest. If the Yellow Train chugged direct from Rathwood, it would take about six minutes but we have various slow-down’s and stops en route. ‘Look!’ shrieks Choo Choo, with tremendous excitement. ‘There they are! Prancer, Dancer …’. She names them all as children up and down the line coo and point as the reindeer who stare back at us with mixed emotions.

‘Aw,’ says Choo-choo, rather cleverly, ‘the reindeers are missing the Christmas spirit too … now where is it boys and girls?’

And then, the first clue, as we are press-ganged into singing ‘Rudolph the Red Nose Reindeer’. I mumble along but open my mouth wider when my daughters shoot me a look. Onwards to Grampa Reindeer’s cottage, a stable amid the spruce trees. It’s clearly just a geezer dressed up in a reindeer suit but I guess smaller children might fall for it. He says he too is pining for the missing Christmas spirit which calls for another song.

It helps to warm me up a little. The children are rewarded with high-fives from Grampa and a rather stylish jingle bell; the jingling becomes part of the soundtrack for the remainder of the journey. Decibels rise in the mouths of the young. Santa’s up next.

By the time we reach his woodland cabin, it’s so cold you can make smoke signals with your breath. Seizing the opportunity, a brace of exceptionally spirited elves called Holly and Ivy instruct us to participate in a series of ‘elf’ exercises such as star jumps and toe-touching. There is an element of organized madness about this, twixt all the shrieks and jingles, the spontaneous songs and the infectious elfin banter. It proves too much for one toddler who sobs loudly until his mother deftly wins him around. Meanwhile we note that children are vanishing through a magic door in small groups, one or two at a time, and then emerging through another door, armed with a pressie.

In we go. My girls bottle it the moment they meet the main man. Total stage fright.

My daughters stare at their feet.

‘A surprise?’ volunteers the elder one after a series of telepathic kicks from me.

‘A surprise’, echoes the other.

But Santa is a tried and tested conversationalist and he keeps it going until soon the girls are promising to leave out carrots and mince pies for him come the big night. A flash of the camera and then, ho ho ho, here you go, one daughter scores a faux Lego set called ‘Pony Field Stables’, the other gets a sequin stiletto money-box, both made by elves in the Netherlands. The girls seem satisfied as we board the train home.
Our adventure concludes on Candy Cane Lane where we munch hot dogs and children whirl on a Spinning Cup carousel. They’re also eyeballing a Christmas menu in the Rathwood restaurant offering such delights as Vixen’s Catch (seafood goujon’s with fries), Dasher’s Dish (home cooked spag-bol) and Blitzen’s Bangers (jumbo sausages).

In terms of Christmas ambience, the Santa Train has an invigorating blast of the Ploughing Championships about it but parents may rejoice that, at journey’s end, they get to explore a large multi-store that would not look out of place in Dundrum. And that is why my daughters and I are but three of over 50,000 people expected to ride the train between now and Christmas.

Over hot chocolate, I ask them to rate the experience and I fetch up with 57 points out of 60 as a combined result. The train trip lasted one hour and struck me as very good value. It’s €160 per child, €6 per adult, but as well as the magical journey and the jollities along the way, your child will leave with a decent gift or two, or even three, before you tuck into your complimentary hot chocolate.

And what about me? Am I in the Christmas spirit? When we get back to the car, our radio takes on a mind of its own and tunes into XMAS-FM. It’s John Lewie, ‘Stop the Cavalry’. Come on girls, says I, full jovial. Dub a dub a dumb dumb …’.