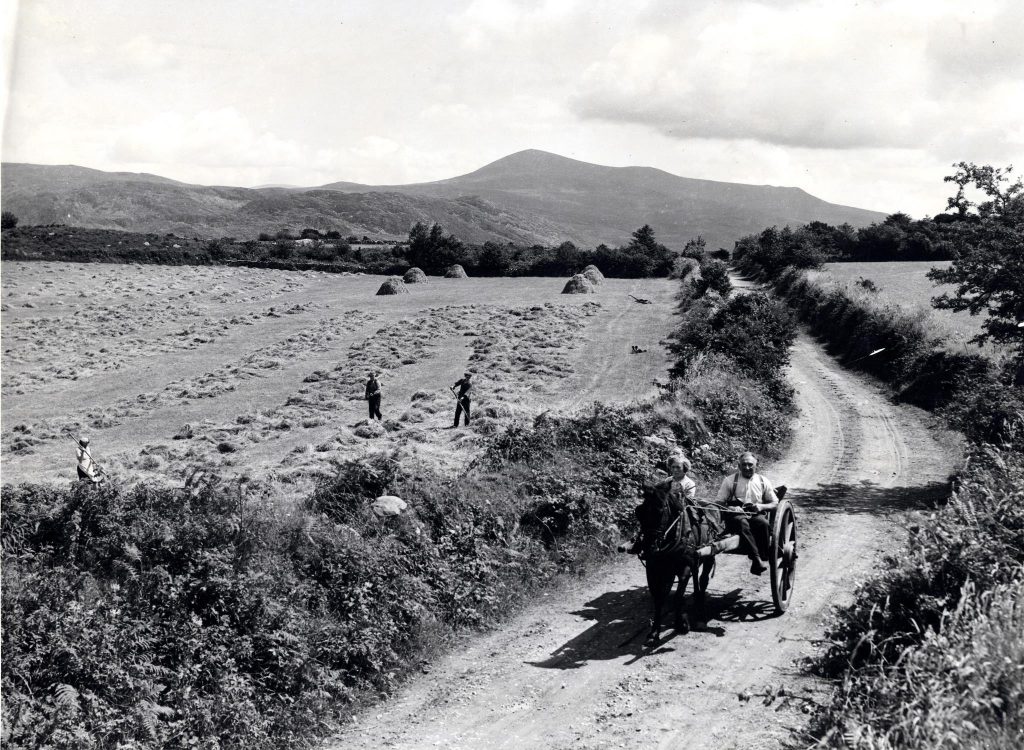 In a letter I received in March 2007, former Timahoe publican John Headen told me of a carman or coal carrier called Jimmy Bolger who he knew as a young man. The story of his homeward voyage from the pub with his horses is so beautiful that I transcribe the tale here.

His road train consisted of three horses, pulling one ton deep bodied trap carts and one spare horse / pony, mule or jennet for “tracing”. Tracing was for negotiating the steeper hills where help was required and the extra animal would pull on a ‘trace’ or chain attached to the side and the hill was attacked two abreast.

His only help was a boy or casual help picked up along the way to hold the horses when required. His daily journey was over 60 miles and the writer (John Headen) vividly remembers a cold winters night about 1:00am, blue moonlit night after a recent snow shower so bright as day, and hearing the jingling of chains coming up the hill. It was Jimmy Bolger going home, full of Bradley’s porter, fast asleep in the corner of one of his coal carts, some sacks of hay under his head and shoulder (he always had plenty of good hay and oats for his animals).

He was still 13 miles from home, with 3 right turns, 2 left turns and 6 straight through cross-roads for the horses to negotiate by automatic pilot. The lead horse and cart was followed by another horse and cart, just the reins tied into the back of the first cart, and the trace horse tied onto the last cart.

This was a regular occurrence and the lead horse never went astray and Johnny never work up until he reached his own yard. All he carried was axel grease, front nails for the horses shoes in winter and feed for the animals. His account shows how he could make some extra money by re-weighing accurately in Timahoe to match his Deerpark docket weight, the extra coal was off-loaded at the ouncil in Timahoe (on the way into Portlaoise) and sold that evening to somebody in the locality, sometimes for Barter, like a pair of Bantams which he would re-barter at Bradley’s pub’.