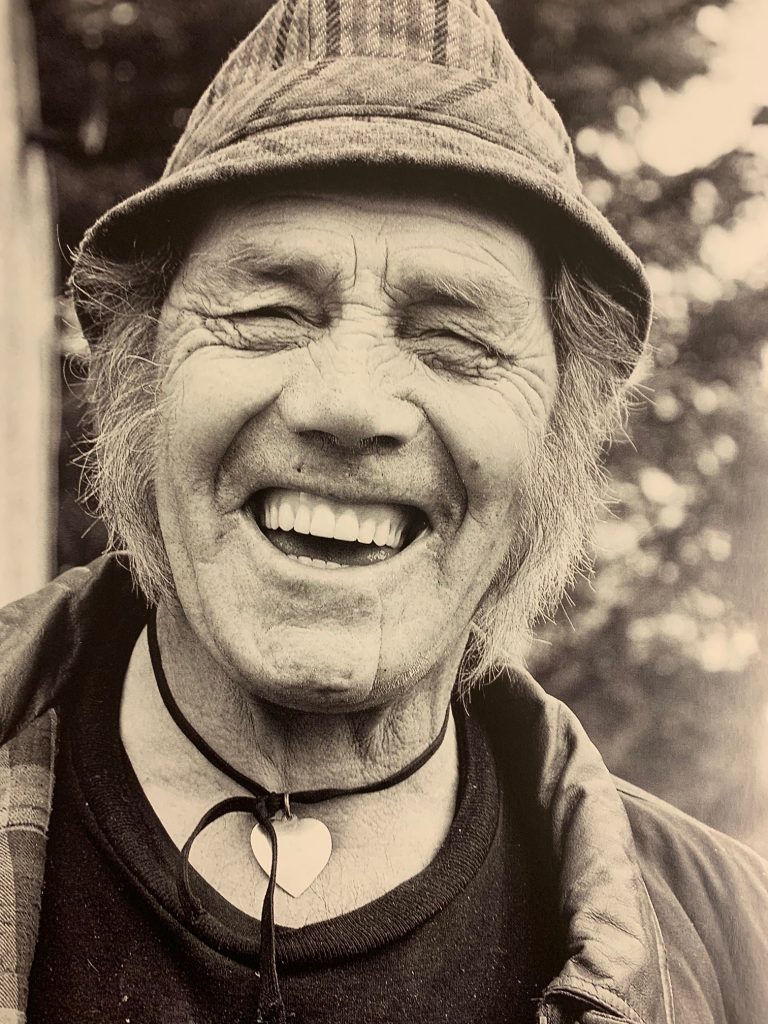 ‘Did you not read all about me in the papers?’ asks Willie Davey, his face breaking into a broad George Clooney grin. ‘Ah now, my story is a long one. I’d need some time to track the memory back’.

We are standing in his roadside prefab in Ballinvoher, a couple of miles outside Ballymote, County Sligo. The shed was dropped off here by a truck earlier in the month. This is Willie’s new home.

‘It’s big enough for one man’, he says, leaning against the Ranger cooker that heats his water and radiators. Just beside us is the ‘one acre’ cottage, in near ruinous condition, where Willie was born seventy years ago. It is the last survivor from a cluster of houses built here a hundred years ago and originally belonged to Willie’s grandfather, Tom Davey. Willie looks at it with mild discomfort. ‘It’d take some money to fix now’, he says.

There are many who believe that Irish civilisation began in County Sligo. Certainly when you stand high up on the cave-studded slopes of Keshcorran Hill, there is an otherworldly sensation that mankind was here a thousand generations ago. This is the parish where Tom Davey was born and reared.

‘And a great man he was’, says Willie. Tom operated a brick lime-kiln at the foot of the hill, burning the rocks into lime as white as snow and then selling the powder on to local farmers.

When not making lime, Tom often played his fiddle, particularly ‘at dances in the houses at them times’. The Daveys were a musical family and Willie’s father, Tommy, was a fine flautist. Willie himself is no slouch on either the mouth organ or the accordion.

‘We could all sing a bit, ballads and things, big band stuff, but not the pop music’. At that precise moment, a cuckoo shoots out from a clock on the kitchen wall and lets out twelve whoops to celebrate midday. ‘He’s come on at a bad time’, observes Willie drolly.

During the 1920s, Tommy Davey went to work as a builder in New York. He later moved to Manchester where he met and married a Galway girl with whom he had been living in England for thirteen years. Strangely, Willie claims his father never set foot in County Galway and that he did not travel much in Ireland, save for his visits to Dublin, of which more anon.

The couple returned to Ireland just before the outbreak of the Second World War. Back in Sligo, Tommy Davey worked with Sligo County Council. A big man, Willie says he spent most of his earnings on drink although we later hear that he only drank at Christmas, so who knows!? ‘He wasn’t used to drink because he hadn’t got the cash’, said Willie. ‘He wasn’t too bad on it but it would change him and he was better without it’. (Tommy died in England.)

Born on 3 March 1940, Willie was the third youngest of their eleven children, all raised in that small, corrugated cottage. ‘There was a lot of us in it’, he observes quietly. Several of his siblings are now dead. One brother lives nearby. Another is in England. He has one sister ‘married down in Cork’ and another was a nun who spent five weeks on a mission somewhere deep in the African interior. 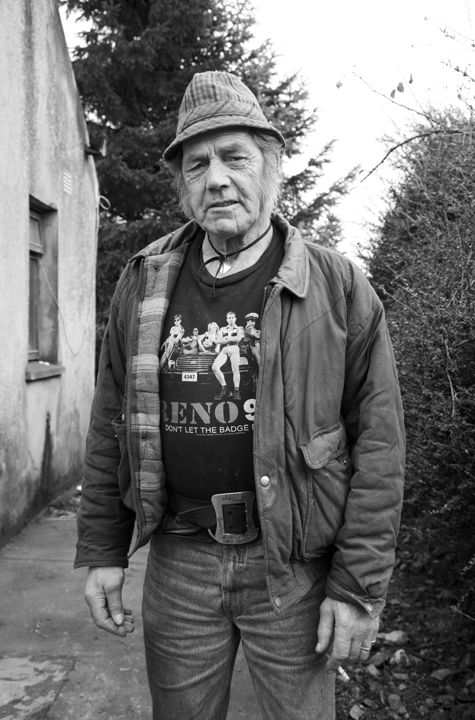 If a child was spotted walking to school in his or her bare feet in the modern age, the newspapers would scream in horror and the parents would quickly be brought before the Society for the Prevention of Cruelty to Children. When Willie Davey was young, he was one of many thousand Irish children who walked to school barefoot every day. ‘Your feet get hard on frosty roads quick enough’, he advises. During the Big Snow of 1947, his mother was nearly lost as she walked into Ballymote with ‘the snow the height of herself’.

School for Willie was a three-mile walk away at Drumcormick, near Lough Arrow. The children sat at long wooden desks, fifteen per desk, and counted down the minutes before they could go home. If you left your lunch in the desk too long, a rat would get at it. Many was the lunchtime that Willie and his pals spent whacking rats with sticks. ‘Sometimes we might not have any lunch at all, only a bit of bread, and when you come back home you wouldn’t have a lot more. But that’s the sort of times we had’.

‘I can tell you’, he goes on, ‘there was nothing to eat one time. People who were poor had nothing at all. There was a lot of big families and how they got on, I do not know. There were too many children. They had no jobs half the time. There was no work, no money, no food. You might work two or three days a week but there was no such thing as dole or an allowance. There was too many people and we were all working by hand, cutting on the bog and putting down crops, because if you didn’t work, you’d go hungry. There was no choice. It was slavery’.

In his 20s, Willie went to England. ‘Sure you had to go somewhere’, he says. ‘I went all around looking for work – I’m not the only man who will tell you that story – but I hadn’t much luck’.

By the mid 1960s, he was building up a reputation as the feistiest hell-raiser in Ballymote. There wasn’t much else to do, he maintains, except go to the pub ‘and there were twenty-four pubs at that time’.

On one occasion his neighbour, Sailor Conlan, persuaded him to drink a lemonade bottle full of poitín with him ‘and when it was finished, we were looking for more of it’. ‘You’d want to know who made the poitin’, he counsels. ‘If it’s the wrong stuff, it’ll kill you’.

That said, Willie’s chosen tipple was a lethal cocktail of Irish whiskey and red wine. ‘I wouldn’t hold it too well and I’d just let myself go’, he says, shaking his head. ‘I used to demolish houses, you know, breaking down doors and things. I was a wild man’.

While we talk, I notice that his t-shirt sports an image of the cops from the spoof ‘Reno 911!’ with the tag-line ‘Don’t Let the Badge Fool Ya’.

Willie was constantly in trouble with the law. He spent many nights in the local gaol but when he drove a Honda 50 through the window of the Ballymote Garda Station, he was sent to prison in Dublin.

‘Oh yes’, he grins, ‘I’ve been down the rocky road to Dublin, and I’ve sung the song many times … I had to calm down. I was getting old and there was always something that the law would be after me for’. He was also struggling to be served. ‘There was many who wouldn’t give Willie Davey a drink’, he says. ‘They were doing it for my own good, but I don’t know if they would let me in now either’.

Willie quit drinking in 1990 but, twenty years later, allows himself the occasional glass of wine at funerals and Christmas.

Willie feels somewhat estranged from modern society. It’s all ‘so different now’ that ‘people have other ways of enjoying themselves, with televisions and telephones and DVDs. Ballymote is a ‘very different town now – different shops, different people’. The younger generations seem incapable of understanding how bad things were. ‘They won’t listen, and they’d nearly be asking you “what is a bog?” now’.

Willie’s gruff, short sentences disguise the humour that makes his eyebrows dance, his lips twitch, his chin jut. He holds his smile for a generous length of time. He does not relish the idea of living alone in his new home. ‘I was a ladies’ man’, he says, ‘but I never met the right lady to marry’.

Willy Davey died aged 81 on  Tuesday 25 January 2022. He is to be laid to rest at St Columba’s Cemetery, Ballymote.

With thanks to his niece, Margaret Hayes, who will be singing ‘The Parting Glass’ at his farewell.