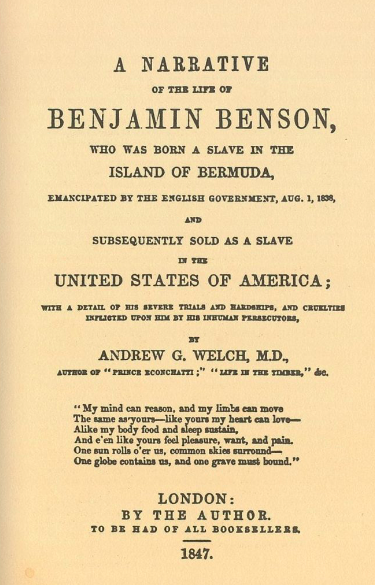 ‘A Narrative of the Life of Benjamin Benson, Emancipated by the English Government, August 1, 1838, and Subsequently Sold as a Slave in the United States of America’ was published in 1847.

1847 saw the publication of ‘A Narrative of the life of Benjamin Benson, in which Mr Benson, a former slave, abolitionist, evangelist and anti-alcohol speaker exposed the horrors of slavery in Bemuda.

Born into slavery in St George’s, Bermuda, in 1818, Benjamin Benson was the son of an African-born father who had been trafficked to the Caribbean before being sent to Bermuda. They were probably on an estate run by a merchant named John Davenport or his father, Robert.
Benjamin was still a child when he was sold to work as a forced labourer on a cotton plantation near Mobile, Alabama, run by a merchant named Sneed. He subsequently worked on Sneed’s rice plantation near New Orleans but returned to Bermuda where he was freed following the abolition of slavery in the British Empire in 1833.

He self-published  his 30-page narrative in 1847, having dictate his life story to an English physician named Andrew G Welch earlier that year. His account revealed stories of branding, disfigurement and other ferocious cruelties, as well as a mass sale to the Americas on the eve of Emancipation.

During the 1850s and 1860s, Benson’s evangelical beliefs brought him to Ireland where he regularly spoke out against the evils of alcohol on behalf of the Irish Temperance League. He argued that the Great Hunger of the late 1840s would not have happened if grain had been used to make bread instead of alcohol.

On 10 October 1862, according to the Southern Reporter and Cork Commercial Courier:
‘He had seen slaves sold in the market and all the misery tat could be inflicted upon human beings by slavery; but the effect of drunkenness were, in his opinion, worse than those of slavery. It was in the interest of the slaveowner to feed his salve with wholesome and nutritive food, to lodge him in a dry and somewhat comfortable place, and to keep his body in vigorous health; but drunkenness deprived a man of wholesome food, of comfortable lodging, and health. He never saw so much misery among slaves as he saw in Spitalfields and St Gile’s; and the greater part of the hardships suffered by the people of these places are attributable to drink.’ 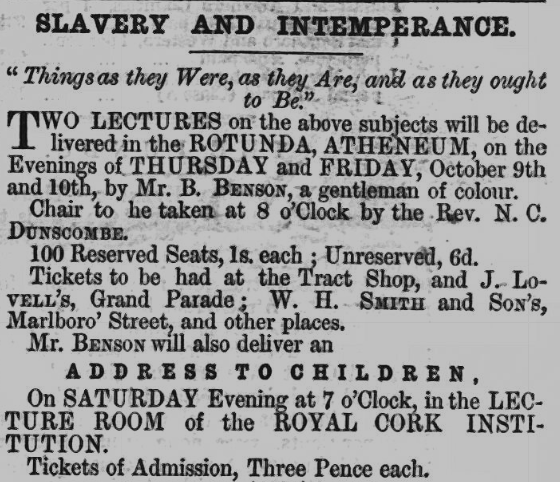 At a subsequent lecture delivered at the Methodist School in Ballina, County Mayo, and reported by the Connaught Watchman on 3 January 1863), he remarked:

‘We may talk about slavery in America, and pity the poor n-r who is the chattel of his white master, but the drunken slaves of this vice are far more deserving of sympathy. Both are bad and a disgrace to human nature, but the drunkard is the most pitiable of the two. The slaves do not live in such hovels or in half the misery and degradation of the drunkard of this free and enlightened land.’
By 1864, Benson and his wife were running the “Coffee Palace and Temperance Refreshment Rooms” at 2 Marlborough Street, Dublin, which opened daily from 7 am to 10 pm, serving hot joints from 12 – 5 pm.  The following year, he became proprietor of the Leopold Temperance Hotel at 13 Lower Abbey Street. However, he was declared bankrupt in 1866.

His subsequent fate is a mystery. 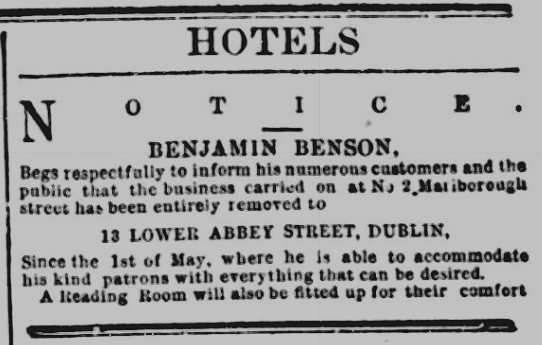