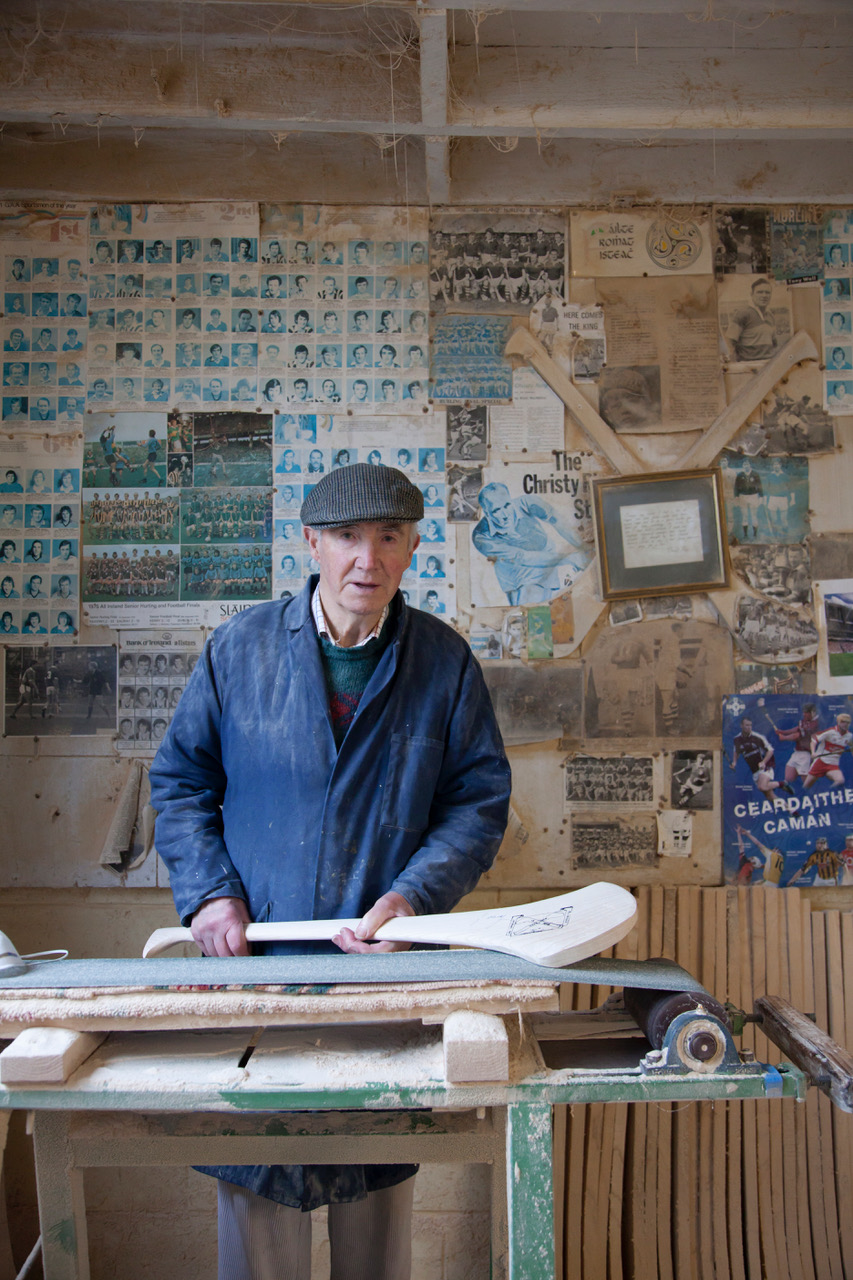 Jimmy Ryan is in reminiscent form as he sweeps the swirling shavings on his workshop floor into a crisp, immaculate pile. The room is exceptionally orderly, despite the fact that it is business as usual on the morning of our visit. There are hurleys in various stages of progress all around the workshop. At one end, the blocks of ash from which he will create the initial shape. At the other, the completed hurleys, neatly stacked along one wall, with the smaller, children’s hurleys lined up along the window sill above them.

‘To make the perfect hurley, you need an ash tree that is between twenty-five and thirty-five years old. If the tree is any younger than that, you won’t get enough hurleys out of it. And if the tree has gone beyond thirty-five, then the skin becomes too rough and the timber is old and brittle.’

Jimmy has been making hurleys since he was a young man. Carpentry was in his blood. ‘The first hurley I ever had was made by my uncle with a big axe and a plane and broken glass to finish it off. I adored that hurley. Then a big bully came and broke it on me. I cried, but the bully lad just laughed.’

Shortly after he left school, Jimmy began attending woodwork night-classes in Killenaule. ‘I made my first hurley under the direction of the woodwork teacher. I had no tools, but he had them all. I was very proud of that hurley. The first one I ever made.’

Jimmy claims he has no head for keeping records and cannot contemplate how many hurleys he has actually made down through the decades. ‘If they were all put end to end, I’d say they would go the ninety miles to Croke Park and most of the way back again,’ says he. He is famed in the locality for making hurleys for young fellows and refusing to accept payment. The quickest one he made took nine and a half minutes, although he reckons a rate of three hurleys an hour is acceptable going. 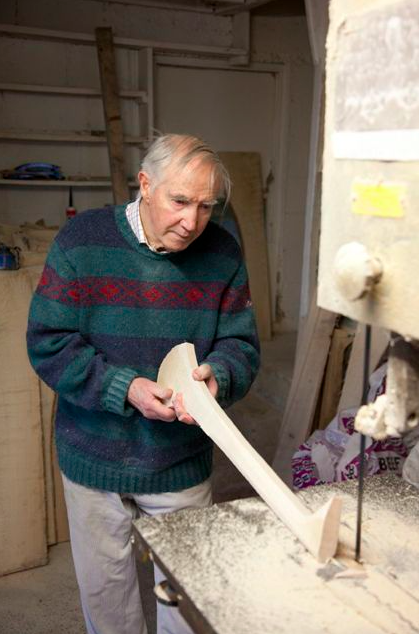 ‘I even made hurleys for some lads over in Milwaukee. They weren’t affiliated to the GAA, but they used to have their own competition on Sundays. They came over here to get them and we had a good old night inside the house after. They invited Mary and I back to Milwaukee for Irish Craft Week, everything free from the gate in. But it clashed! It was the same week as my fiftieth All-Ireland, so I couldn’t go.’

Jimmy concedes that he was in the doghouse with Mary for ‘about three weeks afterwards’ when the Milwaukee holiday fell through, but says he had a record to maintain. ‘I saw sixty-three All-Ireland hurling finals and I have not missed one since 1949 when Tipp beat Laois, 3–13 to 3 points. And I had fifty-six football All-Irelands stacked up as well. All consecutive. Nothing in between. The first I saw was Cavan and Mayo in 1948.’

‘There is such an atmosphere at Croke Park. Everyone nearly shaking hands with you. I loved to go up on the train because there was such chat, all the old fellows talking. When I was a young man, I thought everyone else was old. But I took the train up with Mary and the boys too, when they were very small, running around the carriages. The train was packed and we’d all have seats in different places – one time I sat on the edge of a table – but I loved every minute of it. I got to see some great men playing – and a lot of them ended up in the Dáil.’

Jimmy says his father never hurled. Philip Ryan was a farm labourer, born in Cooldine, Killenaule, in 1888. According to the 1911 census, Philip was one of six children born to James and Ellen Ryan. All the men in the family worked as labourers, while Ellen was a housekeeper and Philip’s sister, Margaret, worked as a domestic servant, perhaps for local gentry.

Across the road from Jimmy’s house is a GAA pitch, which the late Canon Kelly bought for the local GAA club in the 1950s. ‘I saw lads thinning beet in that field when I was a young lad,’ he recalls. ‘On wet days, sacks around their knees, creeping along the drills, thinning it, pulling out the surplus by hand so there’d be enough room for the roots to develop.’

Jimmy and his friends subsequently paced out the pitch and helped raise enough money to erect a stone wall around the perimeter, which was built by the late Paddy Fitzgerald and the late George Lyons. They also installed a gate and a stile at the entrance. A stonecutter called Brophy was paid ten shillings to cut two stones out for the gate piers. Of his own volition, Mr Brophy cut one in the shape of Bill Casey, the Mayo footballer, and the other for Tommy Doyle, the Tipperary hurler. ‘They called Tommy Doyle “the Rubber Man” because he was so fit,’ says Jimmy. ‘He was the only man to hold Christy Ring scoreless for two games.’

Although he’s under time pressure, Jimmy insists there is time enough to make a hurley. We listen to the zings and zims of bandsaws and lathes as he crafts a fresh one, spinning it around in his hand, feeling for lumps and bumps. The coarse sander, the fine sander, the sawdust cones piling high. It is a good thing he wears a dust-mask, as well as his blue coat and hat.

While he’s sanding, Jimmy talks of his passion for greyhounds. ‘I go to the dogs on a Thursday or a Saturday night. I’m only a very small-time gambler but I like looking at the dogs and I enjoy the craic with my doggy friends, and my GAA friends too. In the past two years, eleven of the lads I go to the greyhounds with have gone, Sometimes I’d be thinking, Ryan, are you next? As the poem says, “the clock of life is wound but once, and no man has the power, to tell just when the hands will stop, at late or early hour”.’

As he finishes making the new hurley, two knee-high grandsons rush into the room, wielding small hurleys. ‘Hup-ho!’ cries Jimmy delighted. ‘Would you look at those men with the hurleys! It all starts with a little lad and a small hurley.’

Jimmy Ryan passed away on 27 October 2018. He was buried in Crosscannon Cemetery, Killenaule.