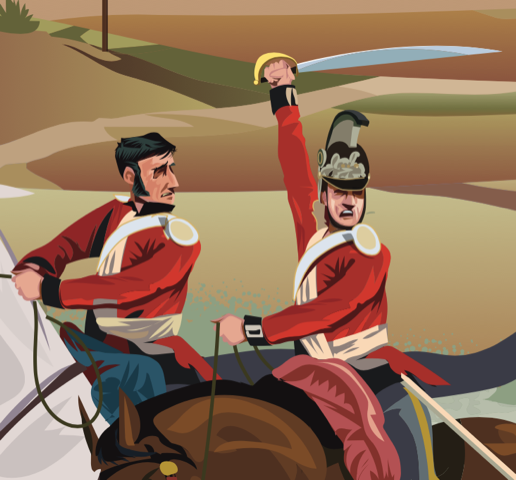 The Races of Castlebar. From an illustration by Derry Dillon, extracted from Past Tracks (2021).

The stories of the inventor of the torpedo, a global prima donna, a telephone pioneer, the short-lived Republic of Connacht, the inglorious Races of Castlebar, the rise and fall of the Earls of Lucan, and a gentleman who went to the gallows. Extracted from Past Tracks, with Irish translations by Jack O’Driscoll.

Born on Main Street in 1852, Louis Brennan is arguably the most remarkable inventor in Irish history. He was nine when his family moved to Melbourne, Australia, where he grew up to be an engineering genius. While toying with a cotton reel, he devised a concept that led him to invent the world’s first practical guided missile. The wire-driven Brennan Torpedo, which he patented in 1878, was the principal cog in Britain’s coastal defence system for over twenty years. To this date, the precise details of how it worked remain classified information. Louis went on to invent a gyroscopic monorail and an early version of the helicopter.

Thomas Larkin grew up at Derrew, Ballyheane, 4 miles south of this station, and is is buried in Killawalla. In 1899, the 25-year-old emigrated to Pittsburgh, Pennsylvania, where he found work as a linesman with the Bell Telephone Company, working with Alexander Graham Bell, inventor of the telephone. During the early 20th century, Thomas played a key role in transforming communications by bringing the phone network across the sprawling prairies, connecting with the remote communities of the American Midwest. Constituted a life member of the Telephone Pioneers of America in 1930, he was presented with an engraved copper cup. He once predicted: “Believe me, the day will come when you will be able to ‘see’ the person who you are speaking to on the telephone.” He also referred to the radio or wireless as a ‘talking box.’ Larkin’s Way, Pittsburgh, may stand as testament to his memory.

Maggie Burke Sheridan was one of the opera world’s leading prima donnas during the 1920s. Born in Castlebar in 1889, she was a daughter of the town’s postmaster. Raised on The Mall, she was a pupil at the Convent of Mercy when she first began singing in public. The Irish-Italian radio pioneer Guglielmo Marconi played a key role in securing operatic training for her in Rome, where she made her soprano début in Puccini‘s ‘La Bohème’ in 1918. She sang at the prestigious La Scala in Milan for many years, reaching a crescendo with performances at Covent Garden, London, and the San Carlo, Naples. She went into virtual retirement in the early 1930s but you can hear her magnificent voice on YouTube.

George Robert Fitzgerald of Turlough House, north-east of Castlebar, was a gentleman duellist who reputedly fought eleven duels before his 24th birthday. His mother was Lady Mary Hervey, sister of the Earl Bishop of Derry and aunt of Lady Bess Hervey (as in the Keira Knightley film The Duchess). (That means George was a nephew of the 2nd, 3rd and 4th Earls Bristol.)

His father was another George Fitzgerald. Lady Mary became fed up with her husband’s mistresses and they separated in 1754, after which she took young George and his brother Charles to England, where they attended Eton. Zoffany had painted George and his two sons in the happy 1760s, young George flying a kite, a painting now held at the National Gallery of Ireland.

Described as ‘an undutiful son, a bad brother and a worse husband”, young George married Jane Connolly, the daughter of William Connolly of Castletown House. In the 1770s George’s companion, and the mother of his daughter, was Elizabeth Lyons. Oliver J. Burke’s ‘Anecdotes of the Connacht Circuit’ (1885) relates how he chained his father to a pet bear, tied him to a dray and abandoned him. He later allegedly incarcerated the old man in a cave.  Such carry on may have inspired this paternal lament by the older George FitzGerald, written at Turlough, County Mayo on 16 March 1782:

I annul a Will by me formerly made and deposited in hands of Archibald Noble my former attorney which he secreted. My only daughter Elizabeth Fitzgerald now living with me a minor of very tender years is totally unprovided for. My eldest son George Robert FitzGerald has made me lament the extent of the provision already made by me for him.

In 1784, he leased almost 300 tenant farms on his extensive estate to migrant linen workers from Ulster. * However, he became embroiled in a family feud, as well as a sinister row with some of the county’s most powerful families. This culminated in the killing of two men by members of ‘The Turlough’, Fitzgerald’s private militia. In 1786, Fitzgerald and his lawyer, Timothy Brecknock, were found guilty of conspiracy to murder. Fitzgerald walked to the gallows in Castlebar; the rope broke twice but held on the third attempt.

Even his opponents hailed him as ‘polished’ and ‘elegant’, but it is notable that he was also a Knight of Tara, which suggests that contrary to being an infamous duellist, he sought to put manners on the practice.  His brother Charles became a Lieutenant Colonel of the North Mayo Militia. See also this 1783 Volunteers link.

Turlough House was abandoned after his execution. As John Colclough remarks: ‘The bricked-up shell remains on the avenue, suggesting that it was a rather interesting house. The present Turlough Park, now the Museum of Country Life, was built in 1863 to the design of Thomas Newenham Deane. When the FitzGerald family sold in 1990 the estate agent’s particulars claimed it had the most northerly vineyard in Europe, though I believe that the Norwegians could challenge this claim.’

During the Rebellion of 1798, just over a thousand French soldiers under General Humbert disembarked unopposed at Killala to help the Irish patriots. Having marched through the Windy Gap at Lahardane, they outwitted the British Crown forces defending Castlebar. The hasty flight of the Redcoats became known as the Races of Castlebar. Humbert then proclaimed John Moore, a local landowner, President of the new Province of Connacht. The independent state was short-lived as the British overpowered the French weeks later. Captured in Castlebar, Moore died in captivity in 1799. After his grave was discovered in 1960, he was given a state military funeral and reinterred at The Mall in Castlebar.

At the height of the rebellion, the novelist Maria Edgeworth wrote to her sister: ‘We have this moment learned from the sheriff of this county, Mr Wilder, that the French have got to Castlebar  – They changed clothes with some peasants and so deceived our troops. They have almost cut off the carabineers, the Longford Militia and a large party of yeomanry who opposed them.’

The most influential family in Castlebar for many centuries were the descendants of Sir Richard Bingham, who served as Governor of Connaught in the reign of Queen Elizabeth. George Bingham, 3rd Earl of Lucan, was nicknamed the ‘Exterminator’ for his brutal policy of eviction. He was the cavalry commander in charge of the disastrous Charge of the Light Brigade during the Crimean War. (Some allege that his game plan was to bump off brother-in-law Lord Cardigan, commander of the Light Brigade).  His son, the 4th Earl owned 60,570 acres of County Mayo in 1876 and converted the family cricket pitch into The Mall, a public park for the town. The 7th Earl was the notorious Lord Lucan who vanished in 1974, following the murder of his children’s nanny, Sandra Rivett. He was declared legally dead in 1999 although the Binghams apparently still own large tracts of the town and county