The stories of the poet laureate who asked Paddy Kavanagh to be a spy, a 1,200 year old Round Tower, a gentleman farmer who drove across Dublin’s Ha’penny Bridge, a plethora or writers and boxers, and a devastating explosion at a gunpowder mill. Extracted from Past Tracks, with Irish translations by Jack O’Driscoll. 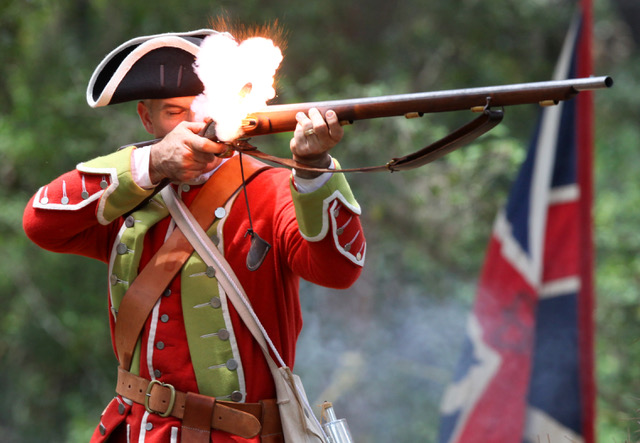 Gunpowder was key to victory in 18th century warfare.

Clondalkin was once a major hub of gunpowder manufacture.  The Mill Shopping Centre occupies the site of a gunpowder mill built in 1782 by William Caldbeck, an amateur architect and barrister. He was also a leading light of the Irish Volunteers, a militia raised to defend Ireland against French or Spanish invasion.

Caldbeck was living in what is now Moyle Park College when his mill blew up in 1787. The explosion caused widespread damage locally and apparently caused a stack of chimneys to fall on Usher’s Quay in Dublin City.

On the plus side, a local dairywoman claimed the shock cured her of ‘an old rheumatism’, as well as ‘an aching tooth’ that dropped out. Amazingly, Clondalkin’s Round Tower survived.

A depiction of the Clondalkin Round Tower from the London Illustrated News 1844.

‘Stands Corkagh still under the grey Dublin sky? While Clondalkin station waits the ghost of a train to Kingsbridge.’ So wrote Sir John Betjeman (1906-1984), Britain’s future poet laureate, who lived at nearby Collinstown Park during the Second World War, or the Emergency as it was known in neutral Ireland. A frequent visitor to Corkagh, Betjeman and his family arrived into the Clondalkin neighbourhood in July 1941 when he rented Collinstown Park. This large Georgian mansion belonged to Major Thomas William Kirkwood (1884-1971), a polo player who grew up at Woodbrook, County Roscommon, before moving to Collinstown with his wife Harriet, a daughter of the Jameson whiskey family. Collinstown Park later became a community centre but was subsequently knocked down.

Betjeman, the then press attaché to the British High Commissioner in Dublin, formed an unlikely friendship with Patrick Kavanagh, the renowned Monaghan poet. Kavanagh penned a poem in honour of Betjeman’s daughter Candida, who was born at Collinstown. The late Anthony Cronin recalled how Betjeman once treated Kavanagh to lunch at the Shelbourne Hotel in Dublin and offered him a job as a spy. “After giving it some thought,” said Cronin, “he turned it down. I’ve always thought that was a mistake.”

Betjeman is thought to have been involved with the gathering of intelligence for the British. He was reputedly marked for assassination by the IRA until a senior member of the organisation declared himself a fan of the Englishman’s evocative poetry and secured a reprieve.

Clondalkin’s 25.6 m (84 ft) high Round Tower is thought to have been built almost 1,200 years ago as a bell-tower. About 120 of these towers were built across Ireland, although most have vanished or tumbled into ruin.

Clondalkin’s tower is the only one still wearing its original conical cap while the rough stonework suggests it is one of the oldest in the country. It may have been built during the time of Amlaíb Conung, a powerful Norse warlord who founded a nearby fort in the mid-9th century. The history of both the tower and Clondalkin is told at the Round Tower Heritage Centre. 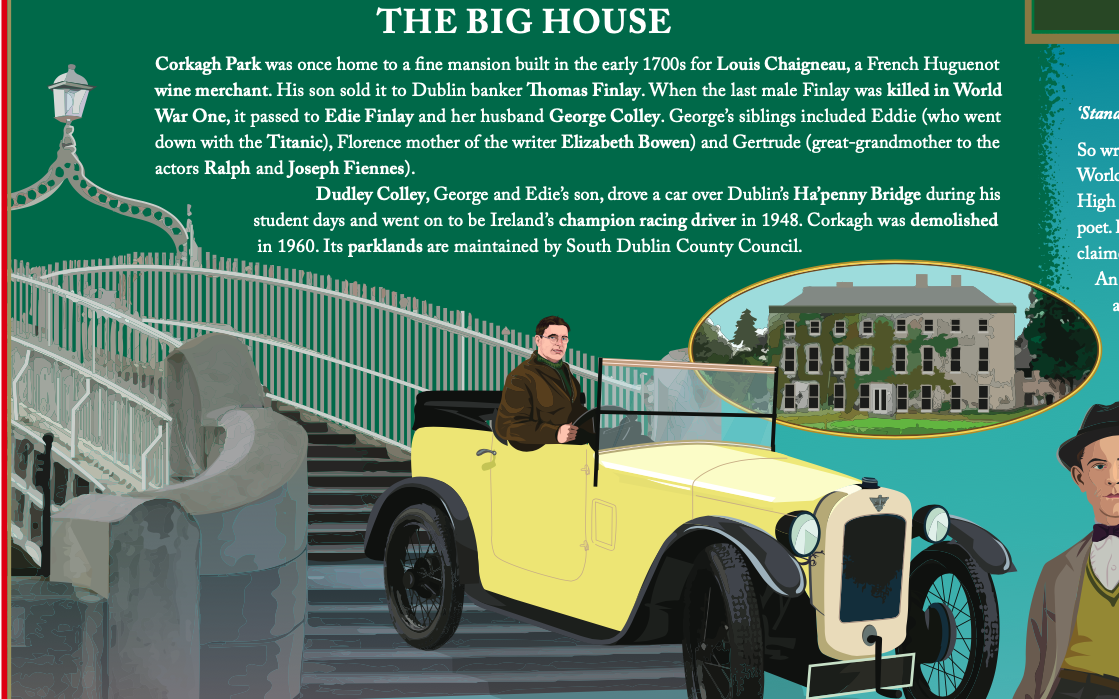 Corkagh Park was once home to a fine mansion built in the early 1700s for Louis Chaigneau, a French Huguenot wine merchant. His son sold it to Dublin banker Thomas Finlay. When the last male Finlay was killed in World War One, it passed to Edie Finlay and her husband George Colley. George’s siblings included Eddie (who went down with the Titanic), Florence (mother of the writer Elizabeth Bowen) and Gertrude (great-grandmother to the actors Ralph and Joseph Fiennes).

Dudley Colley, George and Edie’s son, drove a car over Dublin’s Ha’penny Bridge during his student days and went on to be Ireland’s champion racing driver in 1948. Corkagh was demolished in 1960. Its parklands are maintained by South Dublin County Council. (For more, see here).

Clondalkin was a landscape familiar to several prominent writers. The poet and novelist Katharine Tynan (1859-1931) was born in Clondalkin and grew up on the Whitehall dairy farm off the Belgard Road. Educated at the Dominican Convent of St. Catherine of Sienna in Drogheda, she gained a reputation as a poet with her first volume, ‘Louise dela Wallière and Other Poems; (1885). W.B. Yeats, a frequent visitor, is said to have proposed marriage to her, unsuccessfully. Her friends included Parnell, Douglas Hyde, the poet Gerard Manley Hopkins,  Francis Ledwidge, the Meynells and the Rossettis. In 1893 she married the Trinity College scholar, writer and barrister Henry Albert Hinkson (1865–1919).  She was an aunt of the celebrated comedian, Dave Allen.

Elizabeth Bowen, author of novels such as ‘The Last September’ (filmed by Neil Jordan) and ‘Eva Trout’ (shortlisted for the Man Booker Prize in 1970) spent much of her youth at nearby Corkagh. She was approaching eighteen by the time Edie and George Colley, her aunt and uncle, moved into Corkagh but it was a house she came to love, not least with her aunt Edie becoming something of a mother figure after Florence’s passing. Elizabeth adored the atmosphere at Corkagh, which she described as ‘cheerful, astringent and ultra-Colley … The entire Corkagh garden shows endless loving care: it has not a weed in it.’ That said, Edie’s eagle eye was not always welcome; Elizabeth’s cousin Valerie Hone would later recall how Elizabeth once washed Valerie’s hair in cloudy ammonia in order to vent her anger at being refused permission by Edie to meet a certain young man. See here for more on Corkagh.

In 2016, ‘Holding’, the debut novel by Graham Norton, the Clondalkin-born chat show presenter, won Popular Fiction Book of the Year at the Irish Book Awards.

Singer-songwriter, Mic Christopher, best known for his posthumously-released debut album ‘Skylarking’, attended Coláiste Chilliain in Clondalkin. Born in the Bronx, New York to Irish parents, he was a boy when the family moved back to Dublin in 1972. An enthusiast for traditional Irish music, he started busking as a teenager. He died following an accidental fall in  2001 in Groningen, the Netherlands, aged 32.

Perhaps it’s something in the water but Clondalkin has been a stronghold of boxing since at least 1798 when Jack Langan, a famous bare-knuckle champion, was born here. At the age of 17, Jack was briefly accused of murder when his opponent failed to rise after an all-day fight. Fortunately, his foe eventually awoke and lived to be 93.

In more recent times, nearby Neilstown is the birthplace of Bernard Dunne, the 2009 WBA Super Bantamweight World Champion and present-day commentator, while Kenneth Egan, who won Silver at the 2008 Olympics in Beijing, grew up in Woodford Downs.

Even Aidan Turner, the Clondalkin-born star of ‘Poldark’, learned the art of pugilism for the hit TV series.