This man is named as ‘C. Butler’ in a book of photos of members of the Carlow & Island Hunt – I am pretty sure he is Charlie, who was agent at Lisnavagh.

My thanks to Edward Ruadh Butler, Isobel Butler and David K’Eogh who collectively provided me with almost all of these photographs of Lisnavagh House, Farm House, farmyard and what appears to be Germaine’s.

Charlie Butler was agent to the 2nd Baron Rathdonnell at Lisnavagh House, County Carlow, at the turn of the 19th-20th century, and lived at Germaine’s. Born on the Summer Solstice of 1860, Charles Richard Butler was the eldest of four sons born to James Thomas Butler (1825-1910) of Ardattin, County Carlow, a scion of the Butlers of Broomville who were themselves an off-shoot of the Butlers of Ballintemple. Charles’s mother Adelaide Maria Butler (1830-1911) was a daughter of the notably apostrophe’d George Rous K’Eogh (1792-1850) of Kilbride, near Tullow, County Carlow, and his wife Marianne Molyneux (1791-1858).

Charles’s younger brother General James Henry Butler (1863-1927) served under Kitchener during the advance on Khartoum and the Fashoda Incident, was a general in the Imperial Egyptian Army and fetched up as Governor of the White Nile Province in Sudan from 1905 to 1913. As to Charles’s other brother, Somerset Edward Molyneux Butler (1867-1914) was a surgeon and the fourth George Fitzwalter Butler (1868-1947) served in the Canadian Forces. His oldest sister Mary Butler (c. 1863-1938) was married in 1903 to their first cousin John Molyneux Clopton K’Eogh (1874-1946) of Kilbride (who served with the South African Heavy Artillery), while the younger sister Emily Blanche Butler died unmarried in 1951.

In 1895, Charles Butler married Ethel Elizabeth Jane, eldest daughter of Captain Philip Charles Newton, J.P., of Mount Leinster, Borris, County Carlow.[1] In 1905 she inherited the Mount Leinster estate following the premature death of her brother, Henry Philip Newton, Esq., J.P., in a hunting accident. The family duly left Germaine’s and moved into Mount Leinster. [2]  Charles went on to serve as High Sheriff of County Carlow during the turbulent year of 1920.

Charles and Ethel’s eldest son (James) Humphrey Butler (1897-1979) served with the Royal Irish Rifles during the Great War and on the North West Frontier of India (ie: Pakistan) in 1919 and 1920. He served as a Group Commander in the Royal Air Force during the Second World War, based at RAF Catterick in 1945. He left a son John (1927-2012) by his first wife Marguerite Hale and two daughters by his second wife Freda Mary Peto. 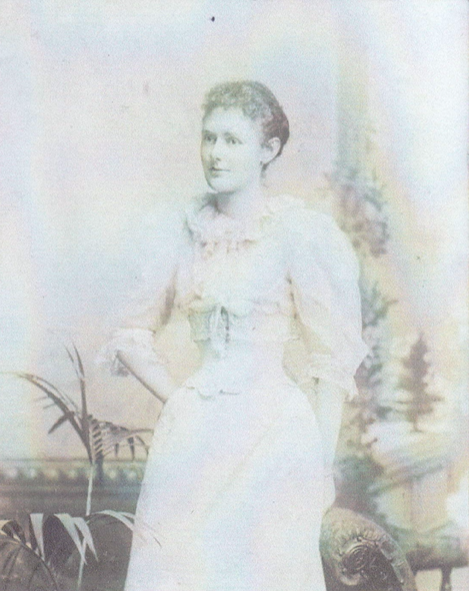 Charles and Ethel’s second son Edward Walter Charles Butler (1900-1989) was born in a farmhouse near Lisnavagh in 1900 but moved to Germaine’s shortly afterwards. Always known as Walter by his parents, he became known as Teddy when he moved to Ulster after 1931. His story is taken up by his grandson Edward Ruadh Butler:

‘Teddy was attending an agricultural college at Ross-on-Wye in Herefordshire in 1916 when, following his sixteenth birthday in May, he and another boy from Yorkshire ran away from school. Their aim, like so many others, was to join a regiment and perform their ‘duty’ fighting against Germany. As both boys were mad about horses, they decided to approach cavalry regiments and eventually convinced a recruiting sergeant to admit them. At the same time his school contacted his mother in County Carlow to warn them that he had run away and she guessed his aim. She sent a telegram to her husband’s younger brother, James Henry Butler, asking him for help finding her son. James had been a general in the Imperial Egyptian Army and Governor of the White Nile Province in Sudan between 1905 and 1913, but was serving in the War Office in London in 1916. Somehow, using the resources of his office, he found his nephew amongst all the young men who had joined up but was left in no doubt by Teddy that he would try again to find his way into another regiment as soon as possible. Instead of risking that his wayward nephew would succeed, General Butler organised it so that Teddy was posted to guarding ammunition dumps. During this period he almost died of influenza.

However, when he turned eighteen Teddy transferred to the Artists’ Rifles in London. He received two weeks training as a hostilities-only officer before being posted to the Western Front as a second lieutenant with the Royal Irish Hussars. Unlike most of the battalion which fought as infantry, Teddy’s unit remained on horseback though was held largely in reserve. Following the armistice, one of Teddy’s platoon’s duties was to round up survivors, specifically those suffering from shell-shock. Many of these vulnerable men were heavily armed and would defend themselves against anyone who came near them. By the time he was demobbed, he had risen to the rank of captain. 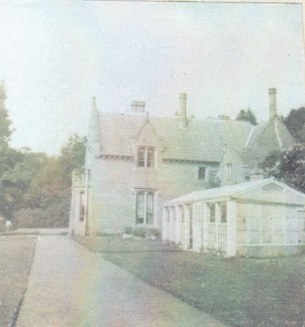 He returned to Mount Leinster with the aim of running the mountain estate for his father who was now in his early sixties. The estate was mostly mountainous and unproductive for anything more than sheep but, according to his son Richard [aka Walter Richard Courtenay Butler], Teddy believed that he could make it viable. However, at some point in the early 1920s, Teddy was accosted by members of the local IRA and tied to a gatepost at Mount Leinster. They told him that it was because of his service in the British Army that they were going to execute him. Fortunately a passing vehicle scared them off and his sister Blanche discovered Teddy and freed him. That night he fled to Dublin and the day after that he was on his way to Australia.

Teddy took a job with Sir Sidney Kidman as a rancher on one of his cattle stations and worked in the Northern Territory and South Australian deserts. At one stage he and an aboriginal worker only survived in the desert by shooting a wild donkey. He contracted dengue fever during his time in Australia and again was lucky to survive. At one stage around 1925, Teddy was in the desert in Australia, his sister Blanche was living in the desert in Western Australia, their younger brother Beauchamp was on secondment from the British Army with a camel troop in the Sudanese desert, and the eldest, Humphrey, was serving with the RAF in desert landscape of the Hindu Kush.

Teddy returned to Ireland at some point before 1931 (there is a picture of him taking part in the Seskinore Races) and was given a job as land agent to the Archdale family of Castle Archdale on Lower Lough Erne in Fermanagh. A keen hunter, Teddy met Iris Moriarty from nearby Omagh through their shared interest and membership of the Seskinore Harriers. [Iris Courtenay Moriarty was the daughter of the Rev. G. Moriarty, Rector of Erganagh, near Omagh.] They married in May 1939, shortly after his older brother Humphrey’s second wedding, and had a son, Walter Richard Courtenay Butler, and a daughter, Maeve, who is the mother of the Divine Comedy singer, Neil Hannon.

In 1939, like so many Ulstermen, Teddy volunteered for the army to fight against the Nazis. He believed his experiences during the first war would make him indispensable to the war effort, but, to his chagrin, they declared him unfit for service due to his medical history of illness and injury. He took a job as agent to the American millionaire Henry McIlhenny who had purchased the 170 square kilometre estate at Glenveagh in Donegal in 1938. McIlhenny – his son Richard’s godfather – spent the war in the US Navy and so overall management of the estate fell to Teddy until his service ended.

In 1946, Teddy became land agent to the Herdman family (factory owners in Sion Mills in Tyrone) at Glenmore on the River Fin again in Donegal. Three years later he left Glenmore having purchased a 25-acre farm at nearby Castlefinn. Known as the manor house, it had been dower house at some point in its history. There he kept dairy cattle as well as horses.

In 1964, Teddy and Iris sold Castlefinn and moved to Springhill House at Moneymore in Derry where Teddy acted as National Trust warden. He later became area warden and oversaw the restoration/renovations at Wellbrook Beetling Mill at Cookstown, the Woodrow Wilson Presidential House in Omagh, Gray’s Printing Press in Strabane, and Mellon House (on behalf of the Mellon Trust) at the Ulster-American Folk Park. In 1979, he left Springhill to oversee the work at Hezlett House on the Downhill demesne at Castlerock. Iris passed away in 1986 and Teddy died at Fivemiletown (where he lived with his daughter Maeve) in February 1989. Springhill House, formerly home to the Lenox-Conyngham family, was used as a film location for the 2018 BBC adaptation of Eugene McCabe’s book ‘Death and Nightingales’.

Charles and Ethel’s third son Lt. Col. Beauchamp (Henry) Butler, DSO, (1902-1943) served with the 1st Battalion, Royal Inniskilling Fusiliers, during the Second World War but was killed in action in southern Italy on 27 October 1943. His wife Vera Mary was a daughter of Major W. Stewart, MC, JP, of Daisy Hill, Clogher, County Tyrone. He was survived by two sons, one of whom was called Patrick. 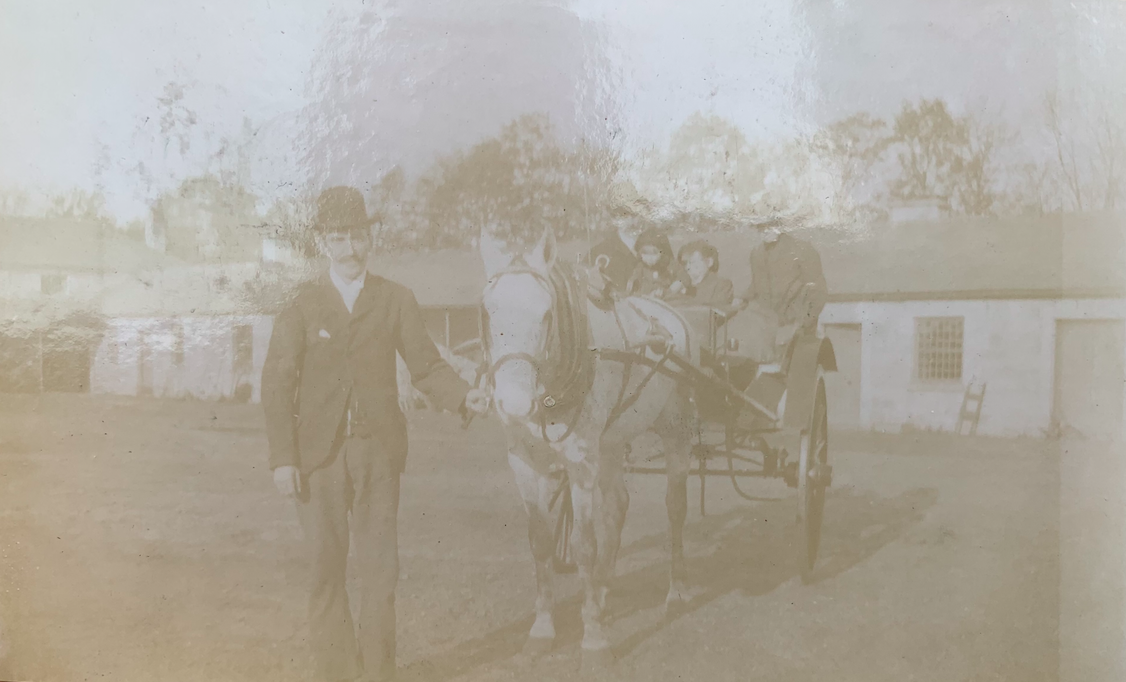 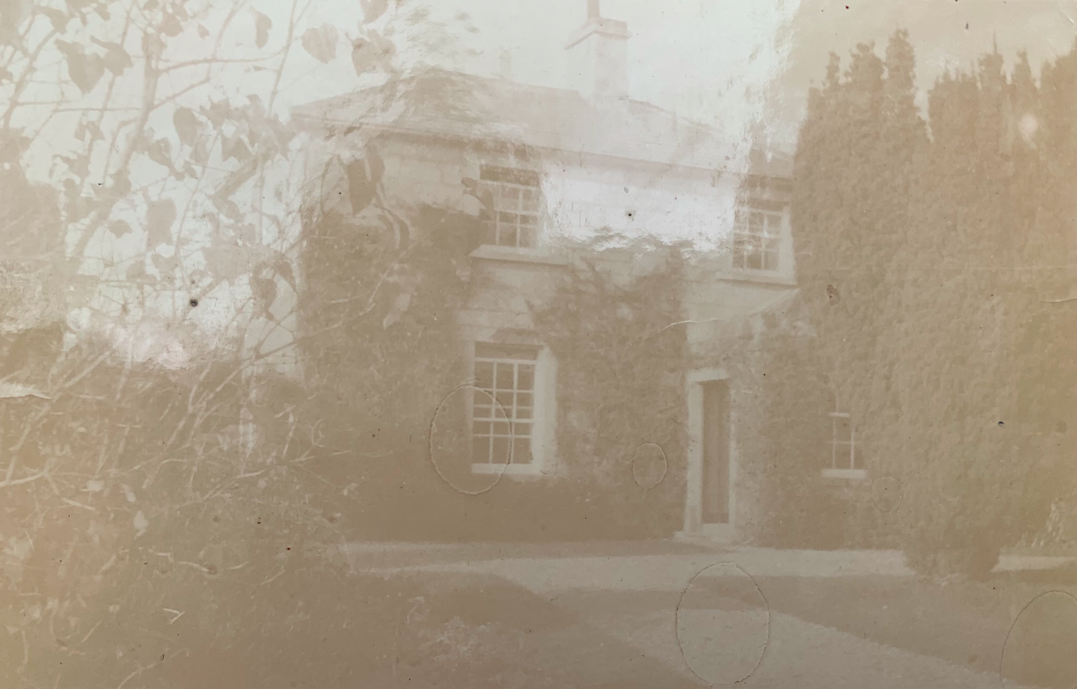 The Farmhouse (Steward’s House) at Lisnavagh, 1901. 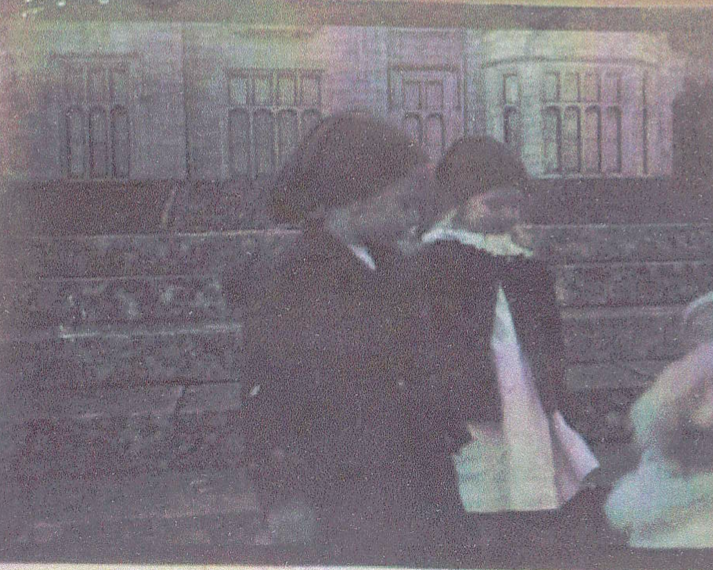 Children on the steps at Lisnavagh. If these are the Butler children, they are a little older now so I suggest this could be 1903 or 1904. 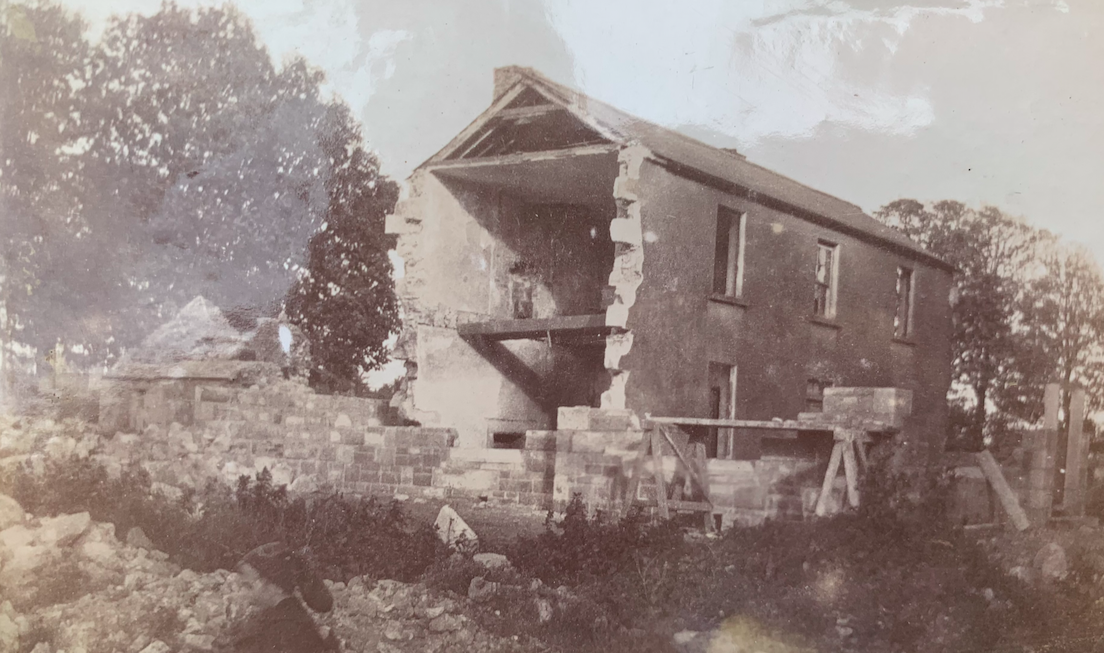 This appears to be the reconstruction of Germaine’s House in about 1900. 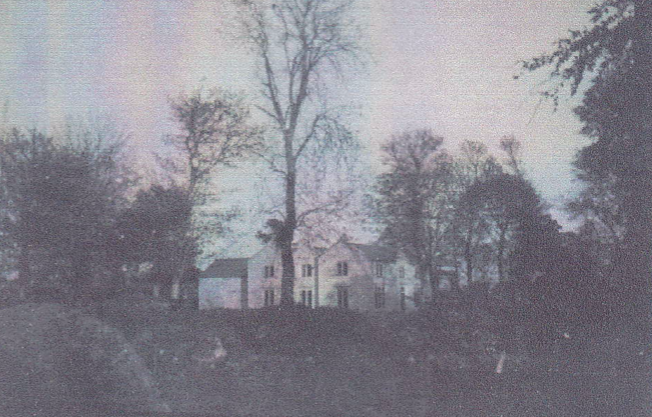 Germaine’s, soon after completion, from the Butler family album. 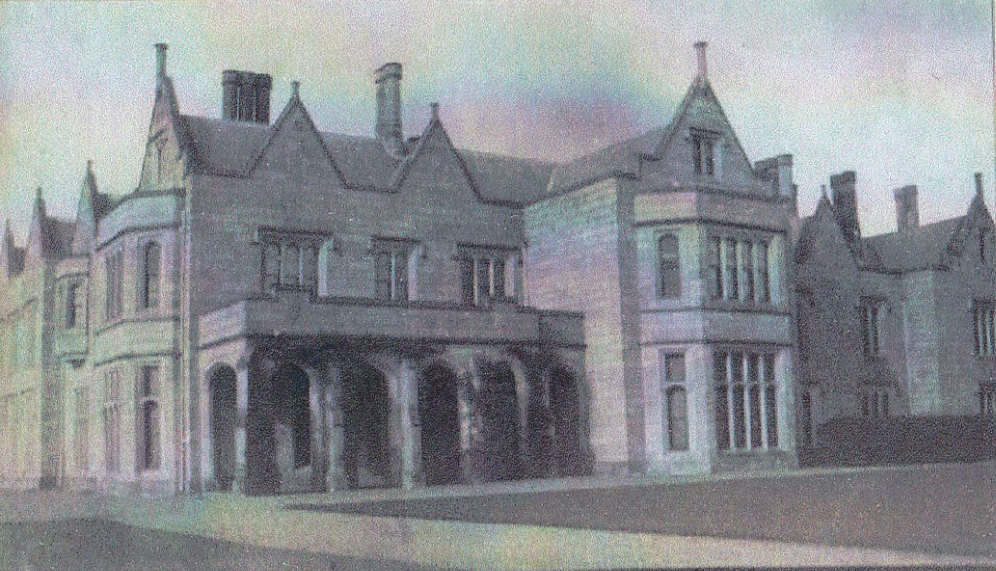 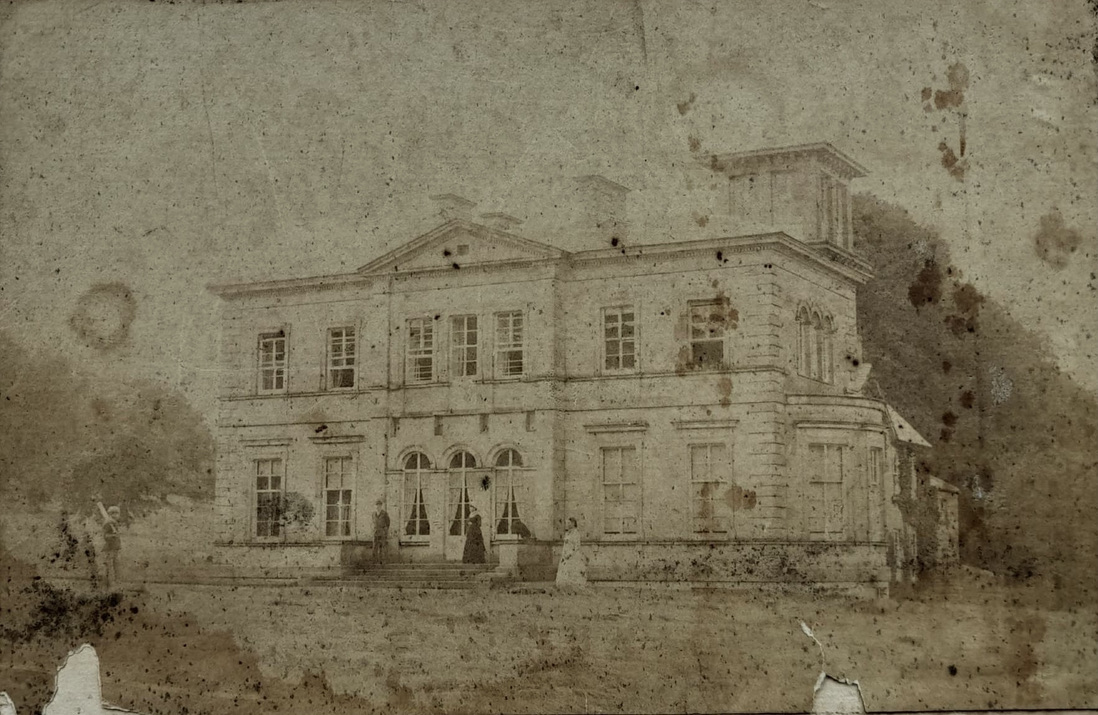 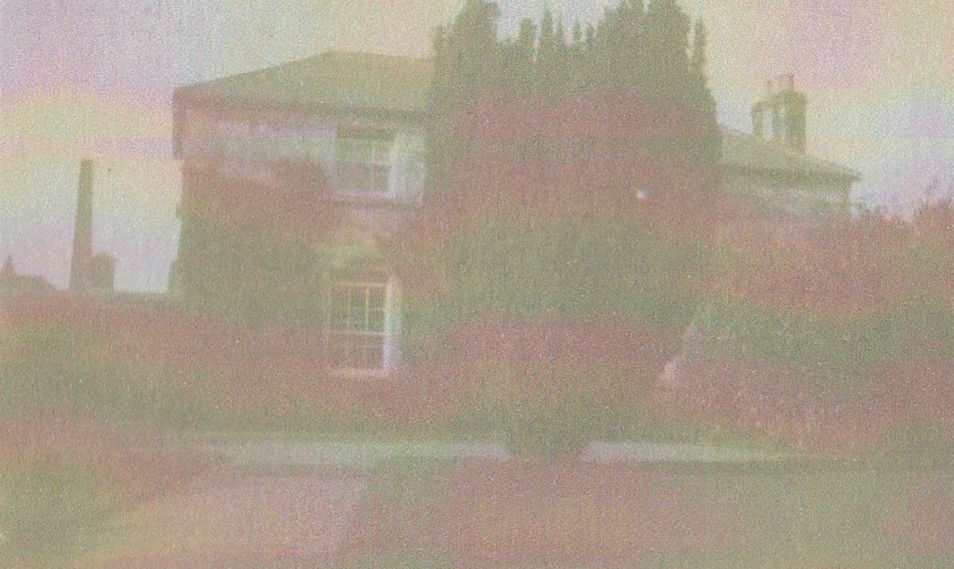 East face of Lisnavagh Farm House. Note the chimney towering over farmyard to the left. 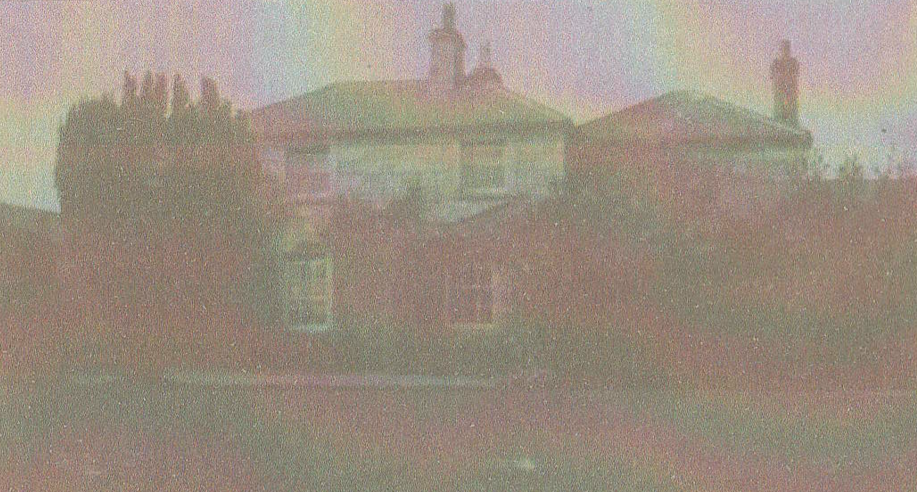 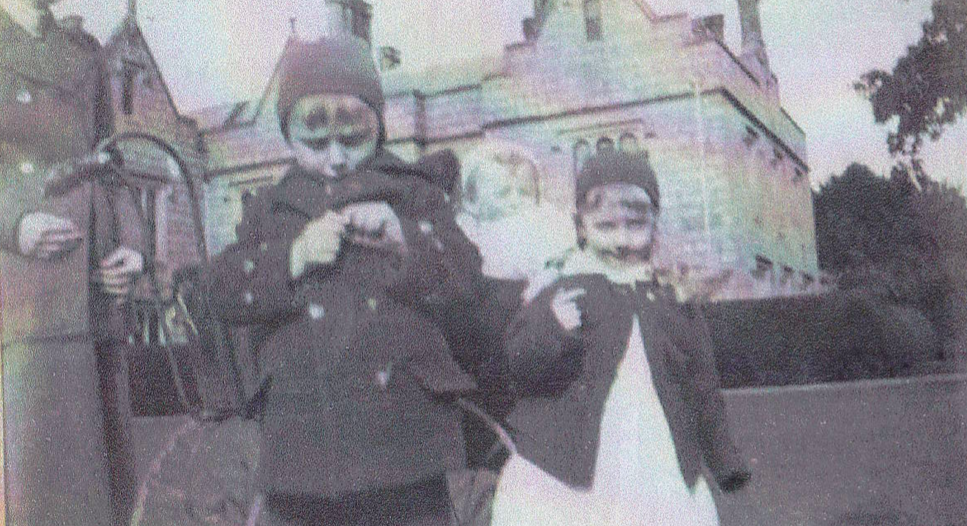 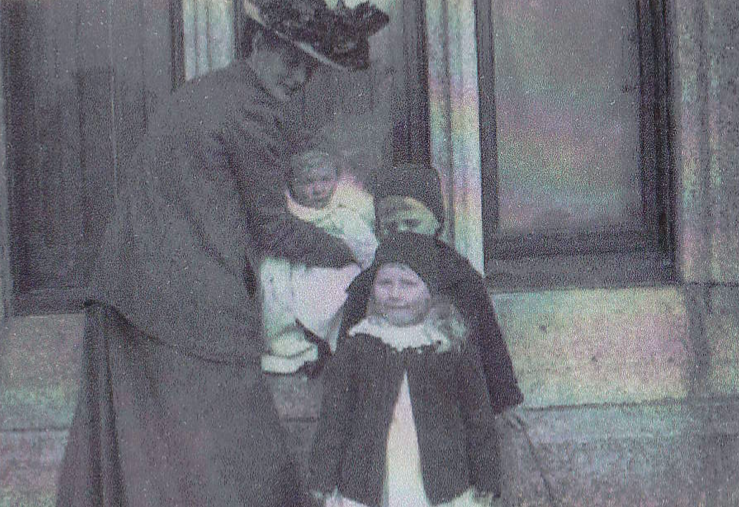 Snapshot of Mrs Butler, or a governess, with her children at Lisnavagh, c. 1901. 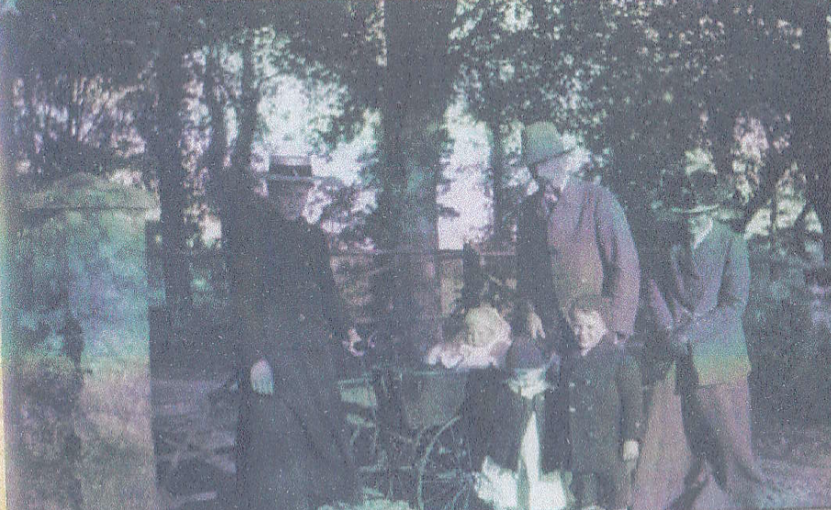 The Butler family standing by the gate to Germaine’s in 1901. 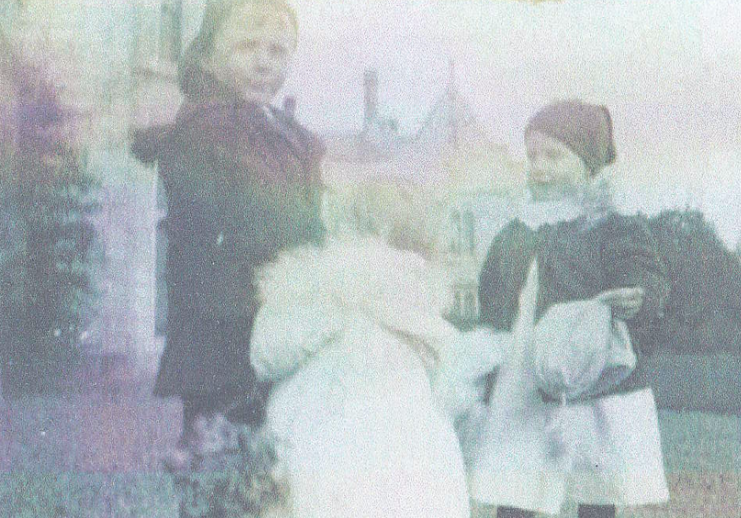 Young Butlers at Lisnavagh, circa 1901. 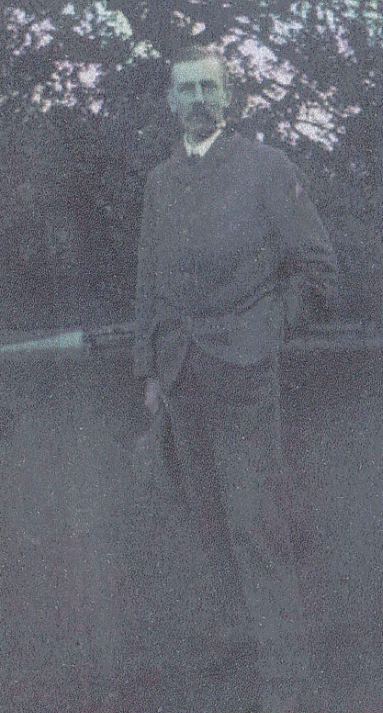 Charlie Butler was agent to Lisnavagh at the time of Queen Victoria’s death in 1901. 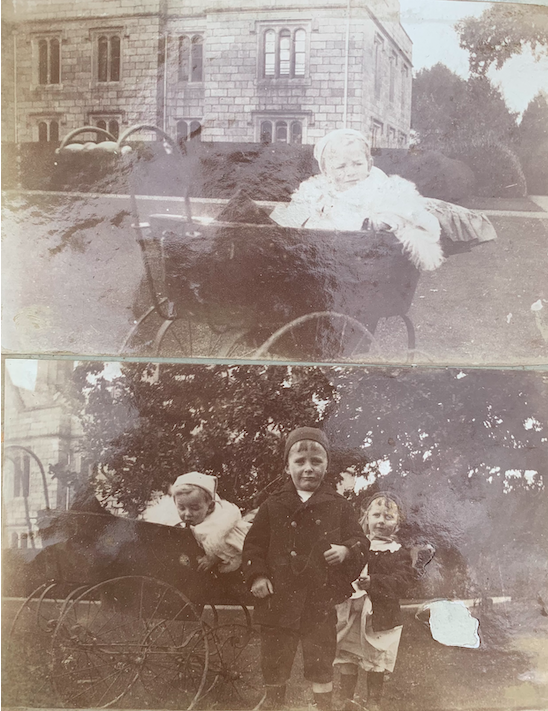 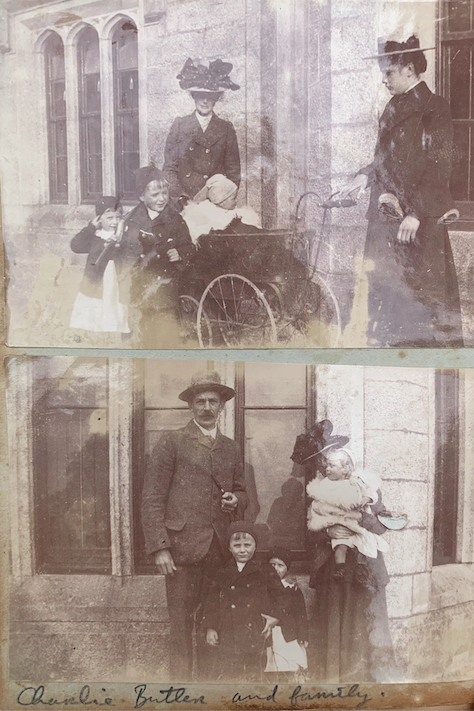 Charlie Butler and family at Lisnavagh. 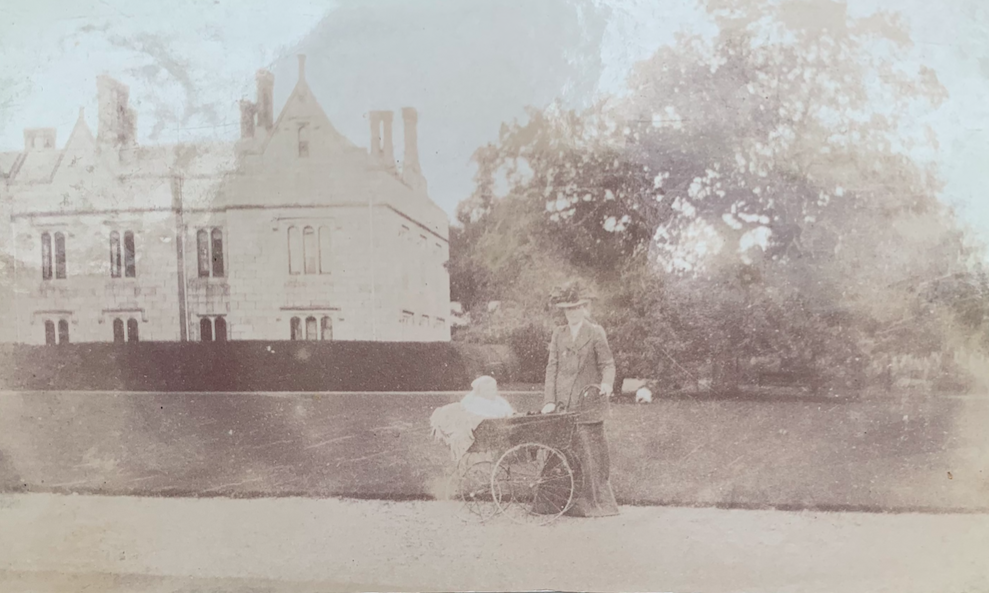 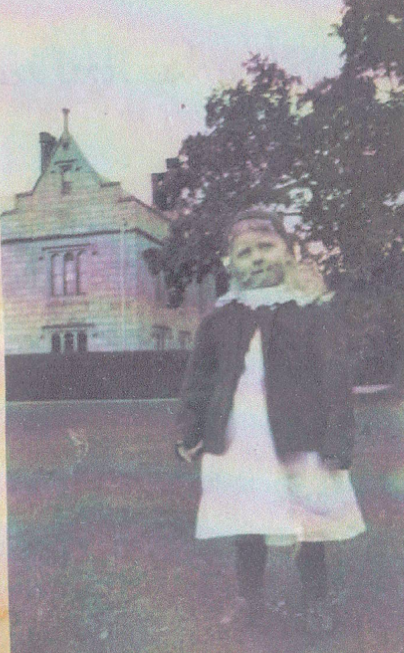 Lisnavagh, 1901, with a child of Charlie Butler. 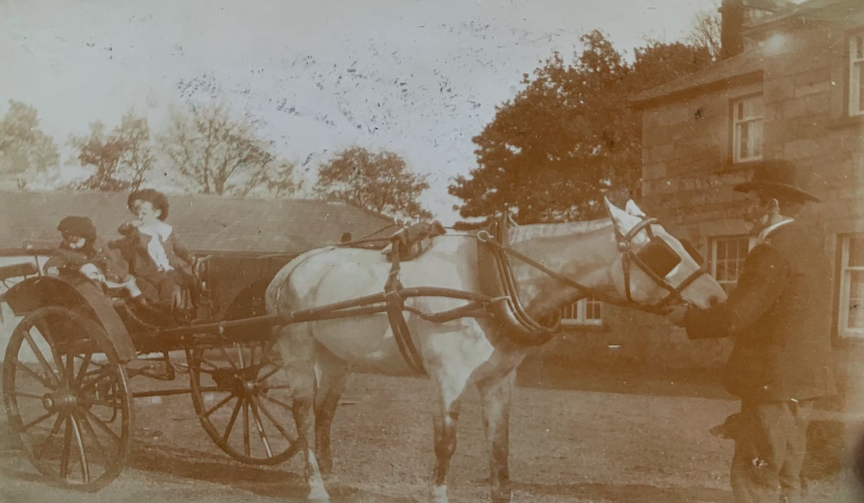 Humphrey and Teddy Butler in a horse and cart, along with Tom Scott, in Lisnavagh farmyard, 1901. 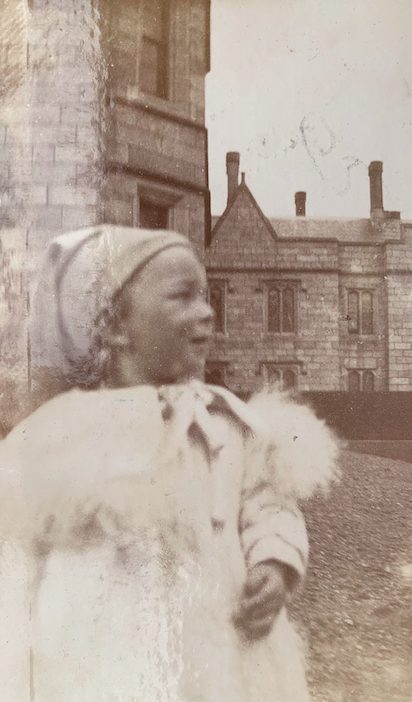 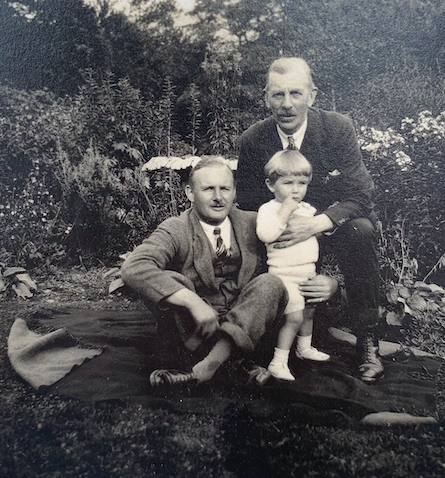