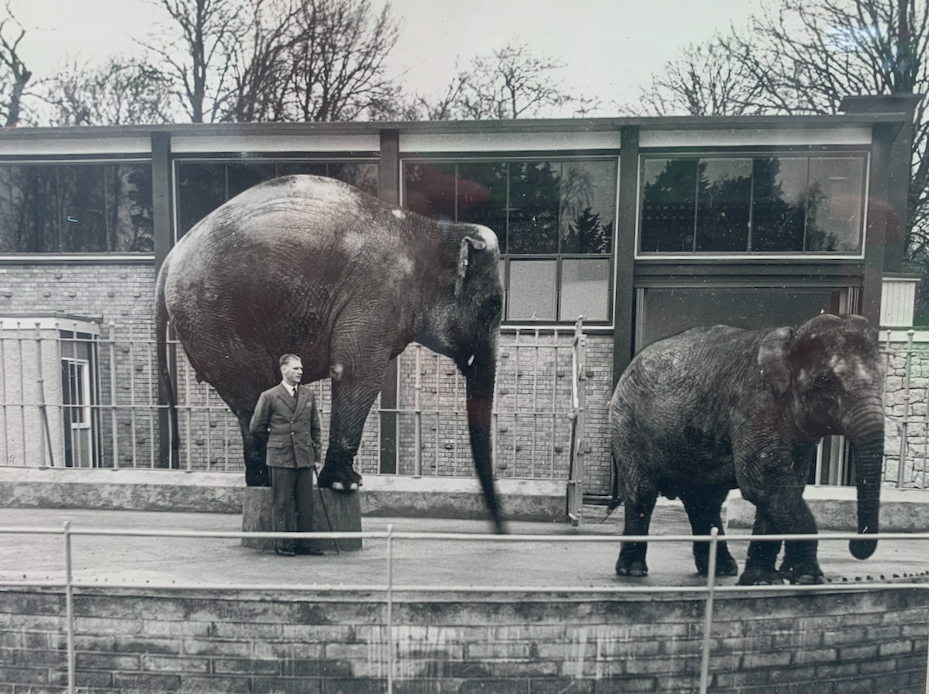 Jim Kenny, father of the broadcaster Pat Kenny, with the elephants at Dublin Zoo. With thanks to Robyn Fallon.

Jim Kenny, father of the broadcaster Pat Kenny, was senior zookeeper at Dublin Zoo for many years before his death in 1976. As Pat recalled:

“It was a tough job in those days but he loved it immensely. He loved to talk to people about the animals and he was very popular with the members of the zoo … Christmas Day was always tough because it was a working day and he would have to go and feed the animals. I remember him getting up early for the feeding and he’d come back later. He loved the job. Winters, though, were not bad at all because it got dark early and the animals all wanted to sleep. It meant he finished early in the afternoon,”

Found abandoned in the jungles of Sri Lanka (or Ceylon as it was then), Komali arrived into the zoo in Phoenix Park in 1950, aged two, the gift of Peter Rust of Colombo. Komali died in 1966.

Miriam Moore, my mother-in-law, whose Craigie family were closely connected to the zoo, fondly recalls the Asian elephants at Dublin Zoo. “Sara and Komali! A penny’s worth of cubed stale bread to feed them and rides on Sara down by the lake!”

The film below, ‘There’s Something About Elephants’, was made by Amy Herron’, whose grandfather was the elephant-keeper at Dublin Zoo who entertained crowds with Sara the elephant.