When College Green was Green 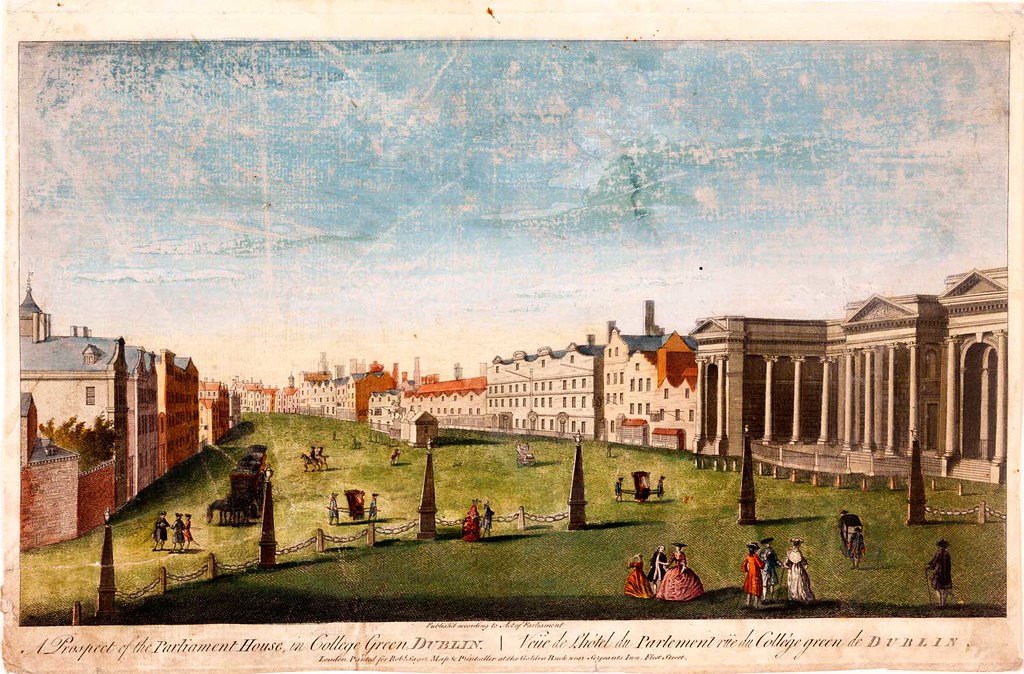 A hand-coloured and perhaps rather idyllic version of College Green and Dame Street, Dublin City, after Joseph Tudor.

This handsome painting of the Irish capital’s College Green dates to circa 1753 and is the work of Dublin-born Joseph Tudor, the principal landscape painter of his day, who actually lived – and died – on Dame Street. He was employed by Dr. Bartholomew Mosse to help decorate the Rotunda Gardens and died two years later.

You can see the original Dutch-gabled houses (aka Dutch Billies) on the left, directly opposite Parliament House, and what fine buildings they were too. A pair of sedan chairs is in operation across the green. You can also just about make out the equestrian statue of King Billy, aka William of Orange, just left of the Watch House a little down the green. 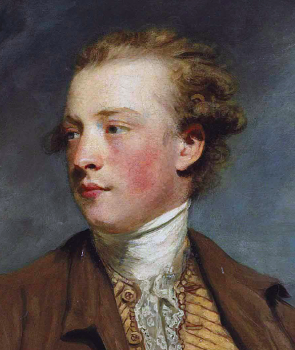 A number of people have rightly commented on how this would seem to be rather an idealised depiction. Surely, with the steady deluge of rain in the eighteenth century the green would have been churned to mud-brown by so many sedan carriers, traders and earth-rutting cart wheels.

It has also been suggested that College Green never looked like this, and that this image was simply coloured green by someone who had not been to Ireland. Any clues on this? Indeed, any other observations are also most welcome.

In the 1750s, No.’s 1-3 Dame Street – and I’d love to know precisely which houses they are in this painting – included a Chocolate House frequented by the well-to-do members of the Irish Houses of Parliament.

By the 1760s, those men had converted the building into a gentleman’s club named for Denis Daly, an eccentric young landowner and prominent politician from Galway. His friend Henry Grattan described him as ‘one of the best and brightest characters that Ireland ever produced.’ Denis Daly married Lady Henrietta Maxwell, only daughter of Robert, Earl of Farnham. Their daughter Catherine married ‘Old John’ Godley who, legend has it, built Killegar in County Leitrim “for the woman he loved”.

Popular with Hell Fire Club aficionados, Daly’s Club became the most sought after gentleman’s club in Georgian Dublin. In 1794, a writer for the European Magazine and London Review remarked: 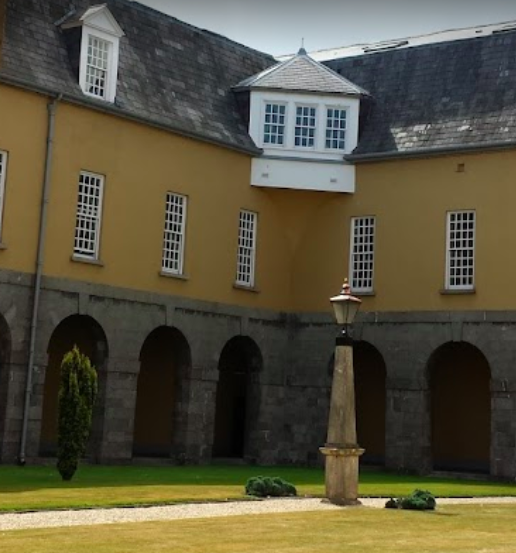 ‘The god of cards and dice has a temple called Daly’s, dedicated to his honour in Dublin, much more magnificent than any temple to be found in that city dedicated to the God of the Universe’.

Following its closure in 1823, the novelist Charles Lever later remarked:

‘To describe the consternation the intelligence caused on every side is impossible; nothing in history equals it – except, perhaps, the entrance of the French army into Moscow, deserted and forsaken by its former inhabitants.’

A later addition to the streetscape was Radley’s Hotel, about which I have written here.

You’ll notice the engraving shows a line of chained obelisks running along the front of Trinity College. Only one of these is known to survive today and hats off to Eamon J. Martin for tracking it down. It’s in the quadrangle at the HSE headquarters of Dr Steeven’s Hospital by Kilmainham.

To see more of Turtle’s tales of Ireland in the Georgian Age, see here.

With thanks to the National Library of Ireland, Liam Kenny and Eamon J Martin.